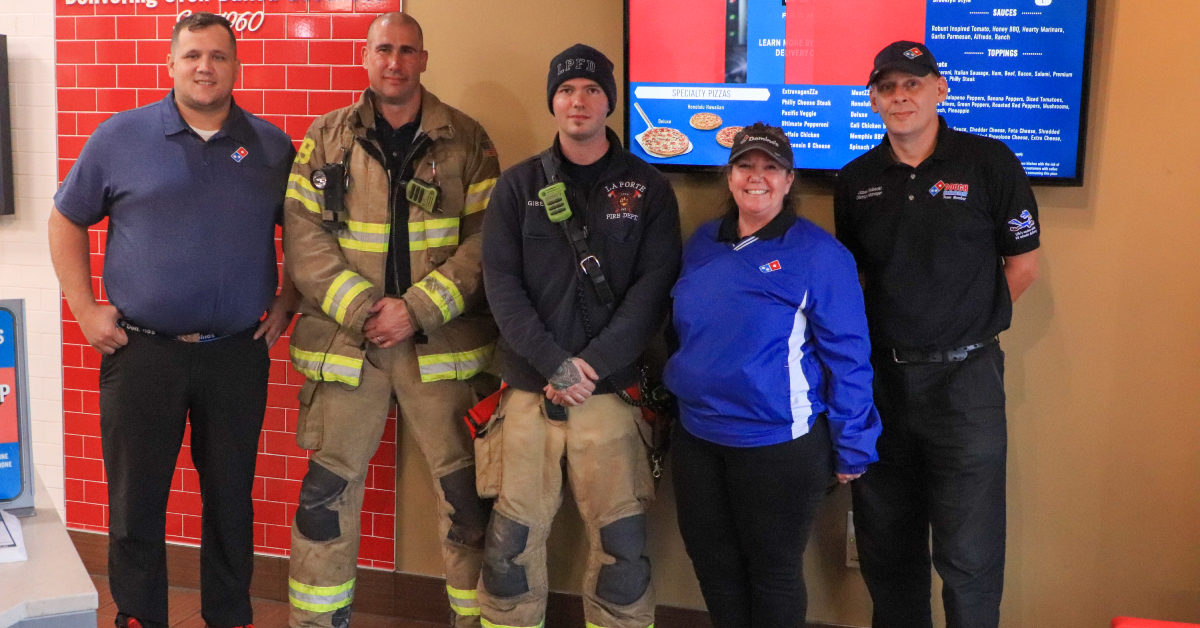 In honor of Fire Prevention Week (October 9-15), four Domino’s stores across Porter and La Porte counties have teamed up with local fire departments to help make fire safety a top priority for customers.

“Fire safety is extremely important,” said Jim Gronemann, owner of Domino’s in Michigan City, La Porte, Chesterton, and Valparaiso. “We’re very excited to partner with the National Fire Protection Association (NFPA) and our local fire departments for a program that not only promotes the safety of our friends and neighbors, but rewards those who make fire safety a priority.”

During the set times on select days throughout the week, customers have the chance to be selected at random and handed a fire engine when their pizza is delivered at their front door. If the smoke alarms in their house are working at the time of the delivery, the pizza is free. If the alarms are either not working or absent, firefighters will then either install them or replace the batteries, also at no cost.

These partnerships and events have been in place for eight years, with involvement from more than 15 different departments across Northwest Indiana. This time around in 2022, Michigan City, La Porte, Chesterton, and Valparaiso are all taking part, with the department’s respective locations hosting the events throughout the week.

“We've seen a lot of smoke detectors that are not working, so it's really exciting to see the firemen turn around and give our customers smoke detectors so that they can be safe,” Mittman said. “At the end of the day, we feel at Domino's like we're doing something really good, and we're partnering up with a great organization. It's really rewarding because the houses that we go to are happily surprised to see the firemen at work and coming in and supporting their efforts.”

Captain Carl Wisnieski of the La Porte Fire Department helped with his city’s event on October 11, and appreciated the help he could offer his community through the partnership with the franchise.

“It’ll be fun helping out the community by passing out the smoke detectors,” he said. “Obviously, we all know smoke detectors save lives, especially for the houses. if you don't have them, we’ll put them in for you, check them to see that they don't work and help put in batteries. We also have our own programs where we deliver smoke detectors, and it's a big deal, and we're happy to work with Domino's, too.”

While the partnership has been many years in the making, this is Wisnieski’s first time participating in the event, he’s been eager to be involved in spreading awareness in a fun way with La Porte residents.

“This actually came from our admin down,” he said. “I think our team was involved first and then they brought it to us, and I think it's a great collaboration with the Domino’s in this community.”

Domino’s currently has two remaining fire safety events this week, with Chesterton hosting its second day on Wednesday, October 12 from 6:30 p.m. - 8:30 p.m., and Valpo wrapping up the week on Thursday, October 13 from 5-7 p.m. In order to be eligible for the event, Domino’s asks that customers call in to place their orders at 219-250-3068 for Chesterton, and 219-465-5500 for Valpo. To learn more about Domino’s, visit dominos.com/en.