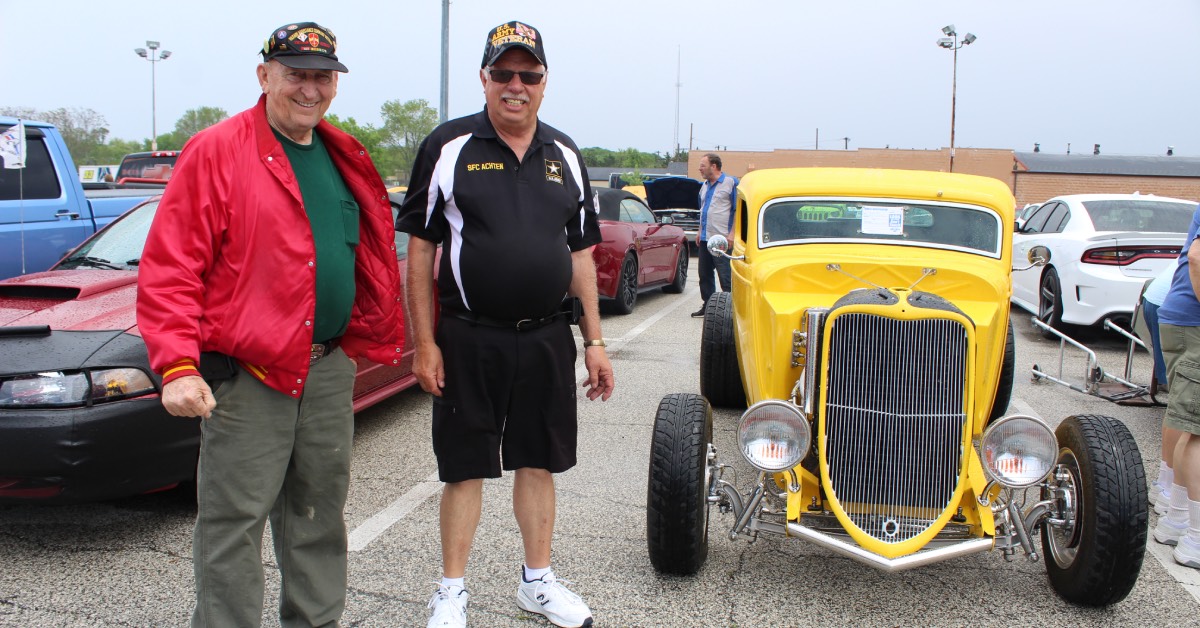 Currie Motors Ford of Valparaiso welcomed the community to their annual Memorial Day Car, Truck, and Bike Show to raise funds for “Folds of Honor”, a non-profit that raises funds for scholarships that benefit families of fallen and disabled service members.

Leo Sfikas, General Manager of Currie Motors Ford of Valparaiso, was behind an enormous grill cooking hamburgers provided by the dealership. He said that Currie Motors Ford happily donates the funds and time to support Folds of Honor. The military charity is close to their hearts, and the people who attend the show make it an amazing event.

“The folks that come out are great people,” Sfikas said. “When we played the national anthem and had that moment of silence for fallen soldiers, you could’ve heard a pin drop.”

The downpour of rain slowed things down at first, but attendees stuck it out under large white tents. The sun reappeared, drying off the the vehicles in the show and allowing the vendors to set up and the bounce house to inflate as scheduled.

“People came even in the rain,” said Shannon Evans, Events Coordinator & Administrative Assistant for Currie Motors Ford. “We care for the community and we do this show because the money raised goes right to the kids [of fallen soldiers]. It’s an amazing charity.”

According to Evans, the fundraiser included raffle prizes, like an XBox, and even a brand new 2019 Ford Mustang with winners called every 15 minutes. Vendors, like freedom artist Mark Paul John, gave attendees a lot to do during the show while they weren’t admiring the stunning line up of vehicles. There were 13 classes and the winners of each class won a trophy.

The Northwest Indiana chairman for Folds of Honor, Bob Carnage, said Memorial Day is a somber day, as we remember those who have paid the ultimate price for our freedom. It is also a time to feel grateful for those freedoms. Folds of Honor is near to Carnage’s heart because he had served in Vietnam and two of his friends died in combat. He saw the hardships their families endured.

“There were over 6,000 soldiers killed in Iraq or Afghanistan in the last 20 years and a million and a half people are directly affected by those deaths,” Carnage said. “If their parent was still alive and worked a regular job, those children would have an opportunity to go to college.”

For Carnage, nothing will ever fill the void that is left within a fallen soldier's family. He feels it is his job to do all he can to support those families and is humbled by the outpouring of support he sees from community partners, like Currie Motors Ford of Valpo. Carnage said he is proud that the scholarship recipients know that the American public helped them in some way.

“It’s breathtaking to hear [the scholarship recipients’] stories,” Carnage said. “I am amazed by this community in Northwest Indiana and the way they support these families.”