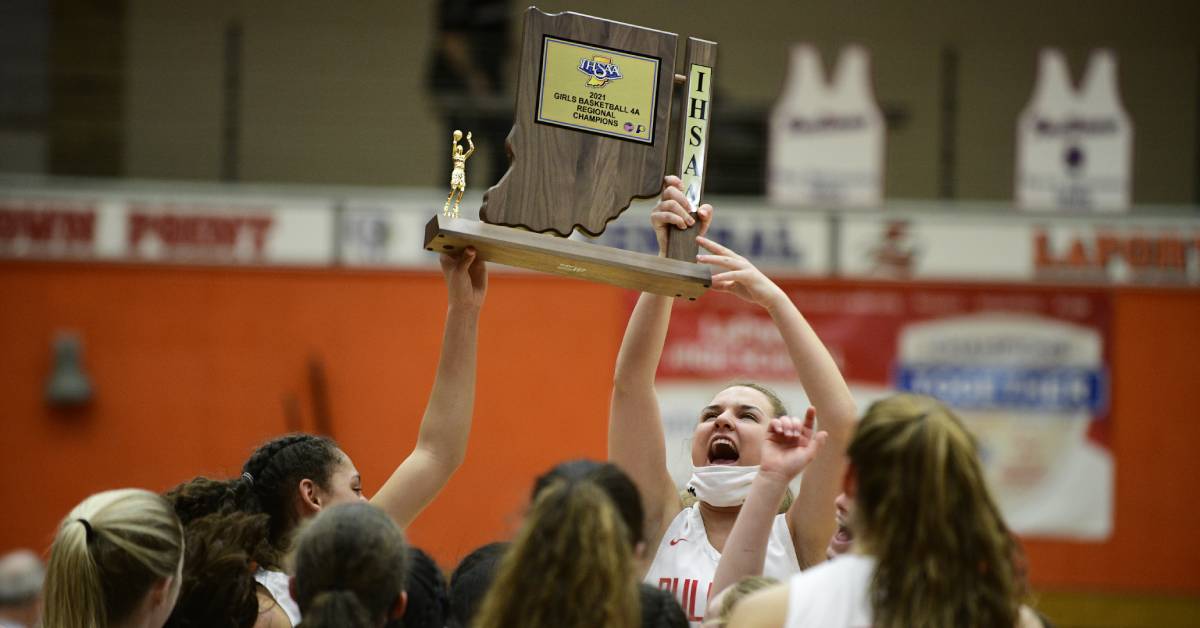 The Crown Point Lady Bulldogs were hungry for a victory when they took on the Penn Kingsmen in the Class 4A regional championship game held at La Porte High School.

The last matchup between these teams was December 27, 2019, when Crown Point fell to Penn by just 12 points. Going into tonight's game, Penn was ranked fourth in the state’s Class 4A schools with Crown Point ranked fifth.

On their team, the Bulldogs had #14 Jessica Carrothers ranked twelfth in the state, with an average of 22.7 points per game and 5.5 rebounds per game, helped by their star rebounder #31 Lilly Stoddard with 8.6 rebounds per game.

Despite winning the tip off in usual fashion, the Bulldogs had a rough start, when the Kingsmen’s #12 Grace Schutt quickly scored a three point basket followed by the Kingsmen’s sinking two more two-point buckets all unanswered.

The Bulldogs struggled to break the seal on their basket as the Kingsmen took an eleven point lead. But it was Carrothers who got her team back on track, sinking their first basket and putting them on the board. She would go on to score an additional five points as the Bulldogs came from behind and ended the first quarter down just one point.

The third quarter ended with the Bulldogs holding a narrow lead of two points. Their aggressive, fast paced attack style took its toll on the Kingsmen in the fourth quarter as the Kingsmen fell behind.

The game ended in a Bulldog victory of Crown Point 54, Kingsmen 45.

“Everybody was on the same page, sharing the basketball, making the pass, communicating defensibly, and rebounding. It’s all the little things that you have to do to beat a team like this,” said coach Chris Seibert after the game.

He attributed their comeback to the mental toughness of the players and the leadership of the seniors. One leader that noticeably stepped up was junior Jessica Carrothers, who scored an impressive 25 points in the game.

“Jessica stepped up and made shot after shot with two and three girls on her, and also made the right reads and passes when it wasn’t open,” said Seibert. “She has an uncanny ability to hit big shots. It goes back to her work ethic. I guarantee you she worked on all those shots at home and in practice. She works on everything she does.”

“I knew that as one of the leaders on the team I had to keep my composure and keep us together, get us started,” said Carrothers. “I just kept saying ‘We are fine guys. We are in this together. We’re going to get started.’ Throughout the second and third quarters, I just kept reminding the girls that we wanted it more.”

Lilly Stoddard did not disappoint, with her rebounding and defensive plays scoring thirteen of the team’s 54 points for the game.

“I don’t think Lilly always gets the credit she deserves,” said Seibert.

#22 Alyna Santiago was also a noticeable force for the team, helping to drive the ball on many occasions. #24 Allie Govert also helped the Bulldogs by scoring ten points.

The regional champions will now advance to the semifinals, and play the Carroll High School Chargers on February 20.