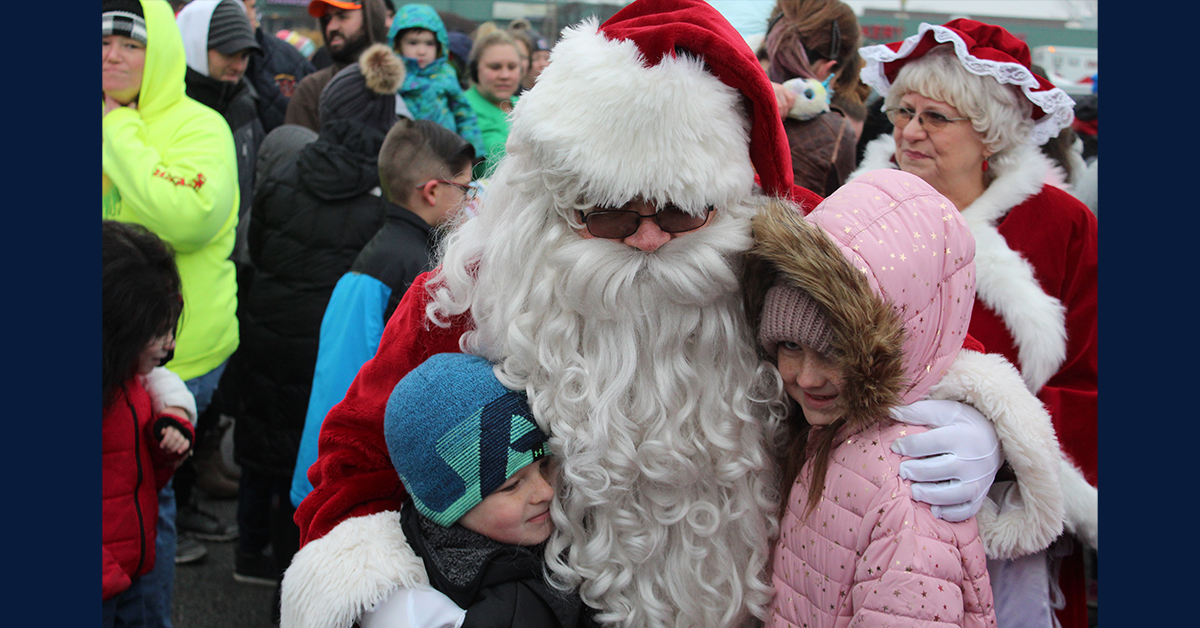 The Holiday Season is a time for traditions, and there are few places where that is more apparent than Crown Point. Every year their Tree and Tank Lighting Ceremonies light up the night, while their Winter Market offers a special look at the town’s artisans and local shops. Yet one event always takes center stage, Saturday’s Santa Parade.

The annual tradition usually sees Santa Claus helicopter in to the Pointe Plaza, but due to the cloudy, windy, and rainy weather conditions, old St. Nicholas rode in on a fire truck. He met with the kids and families that braved the weather, before a parade of other fire trucks and first responders escorted him to the city’s historic Old Courthouse.

“We always get a great response from the families,” said Diana Bosse, Director of Special Events for the City of Crown Point. “It’s something that kicks off the holiday season and gets everyone excited to celebrate here in Crown Point. With the tree and tank lightings last night, the parade and the holiday market today, it’s a great weekend to start the season.”

Some families have made it an annual ritual to start their weekends with the Santa Parade. Stephanie Kras and her family first moved to Crown Point a little over three years ago, and have been attending the parade ever since.

“It’s part of our tradition now,” she said. “First we’ll go get French toast at the Great Harvest Bread Company, get our Santa cookies, then come here and watch Santa. My son loves it and talks about it all year long. I think it’s great that the city gives opportunities for families to come out and enjoy activities like this for free.”

The Santa Parade is just as much a tradition for the city’s first responders as it is for the kids and families around the community. Jake Kabella, who’s been with the Crown Point Fire Department for over four years, looks forward to the event every time.

“I think it’s awesome,” Kabella said. “We were watching videos of the parade from back in 1984, so it’s been a tradition for a long time. It’s changed a little bit, they used to have Santa ride in on a sled carried on a flatbed, but now we’re out here with helicopters and fire trucks. We always get an awesome crowd.”

If you missed the parade, there are still plenty of chances to see Santa in Crown Point. He and Mrs. Claus will be visiting the Courthouse every Sunday until Christmas, as well as on Saturday, December 21. Visit www.crownpoint.in.gov for the full schedule of the city’s holiday events.