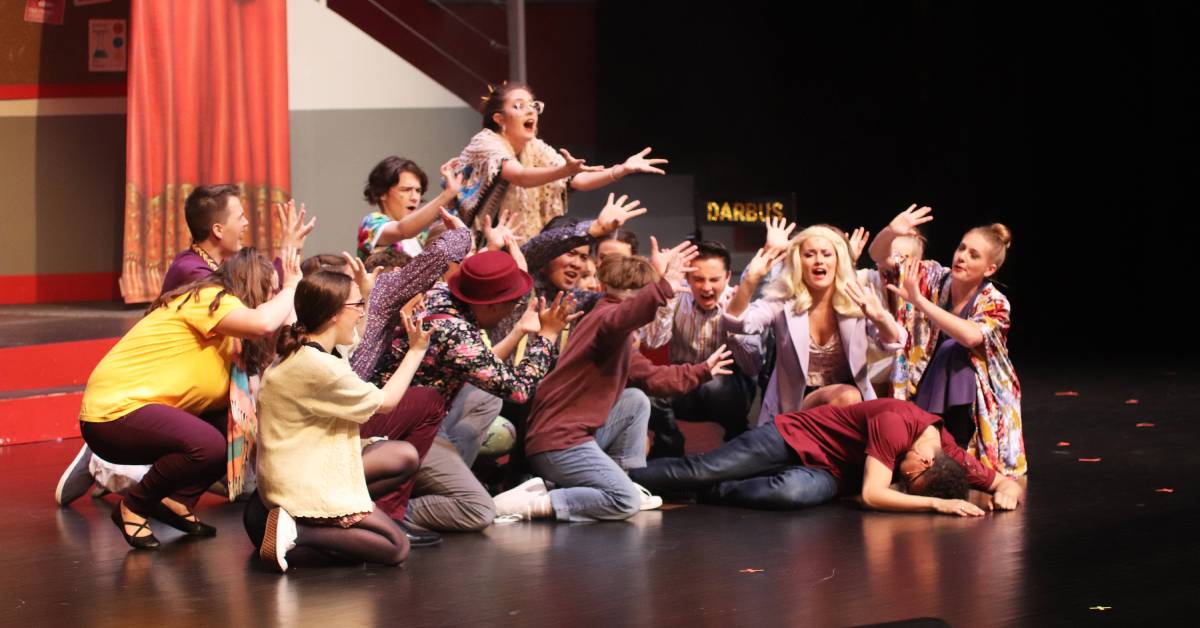 Crown Point High School (CPHS) Theatre opened the curtains on their spring production, Disney’s “High School Musical on Stage!” this Thursday. Since the movie musical came out in 2006, it has quickly become something of a modern classic – and a frequent request to CPHS director Kit Degenhart. This year, he decided the time was right to finally take a crack at it.

“After the quarantine and COVID, I just wanted to do something light,” he said. “Nothing’s lighter than Disney, and nothing at Disney is lighter than ‘High School Musical.’ There’s a great lesson in it about being who you’re truly meant to be, and not performing to what people have told you that you should be. It’s like the 2000’s version of ‘Grease.’”

The casting turnout was huge, with 21 named characters (some being played by different actors during different shows), and an ensemble of 18. Julian Bonner, a first time actor, plays the male lead, having earned the part after his friend Jenna Milosh persuaded him to audition.

“She texted one of my friends and demanded that I audition,” Bonner said. “It’s been an experience for sure. I’ve made a few friends from working with the cast and crew. I’d actually auditioned a month late, and they’ve all been really supportive of me and helpful to me.”

Opening night was Thursday, and Bonner faced down his nerves to help make the show a success.

“When I was in the curtain waiting for it to start, I started to feel my heart beat really fast,” he said. “As soon as it opened though, I knew I couldn’t do anything – I just had to go. I just went out, and all my nerves went away.”

The production wasn’t without its hurdles. After some members came down with COVID-19, contact tracing necessitated that the entire cast quarantine for two weeks – just before their opening night in March was initially scheduled. They quickly bounced back, however, and knew that all their preparation would pay off.

“When we came back we were nervous, but we started to get into it and realized everything was muscle memory,” said Rosalie Degenhart, who is one of two actresses playing the female lead Gabriella Montez. “All the stuff we had to do was embedded in our minds. We had our three rehearsals and just did our very best. I think the break was actually really good for us, because it gave us a lot more time to practice.”

CPHS Theatre’s casts and crews always tightly knit, but the unique circumstances of this production made that dynamic even stronger.

“After the delay we were shocked, a lot of us were down in the dumps,” said Ali Lucas, the second actress portraying Gabriella. “But now, I think it’s brought us even closer together. We were able pull together and worked harder than we’ve ever had to before. I don’t think I would’ve been able to put on this same level of show a month ago without that break. It was a bonding experience, and it really shows in our performance.”

CPHS Theatre is hosting four more performances of “High School Musical on Stage!” Curtains open at 2 p.m. and 7 p.m. on both Saturday and Sunday. See all the details at sites.google.com/cps.k12.in.us/cphstheatre/home.