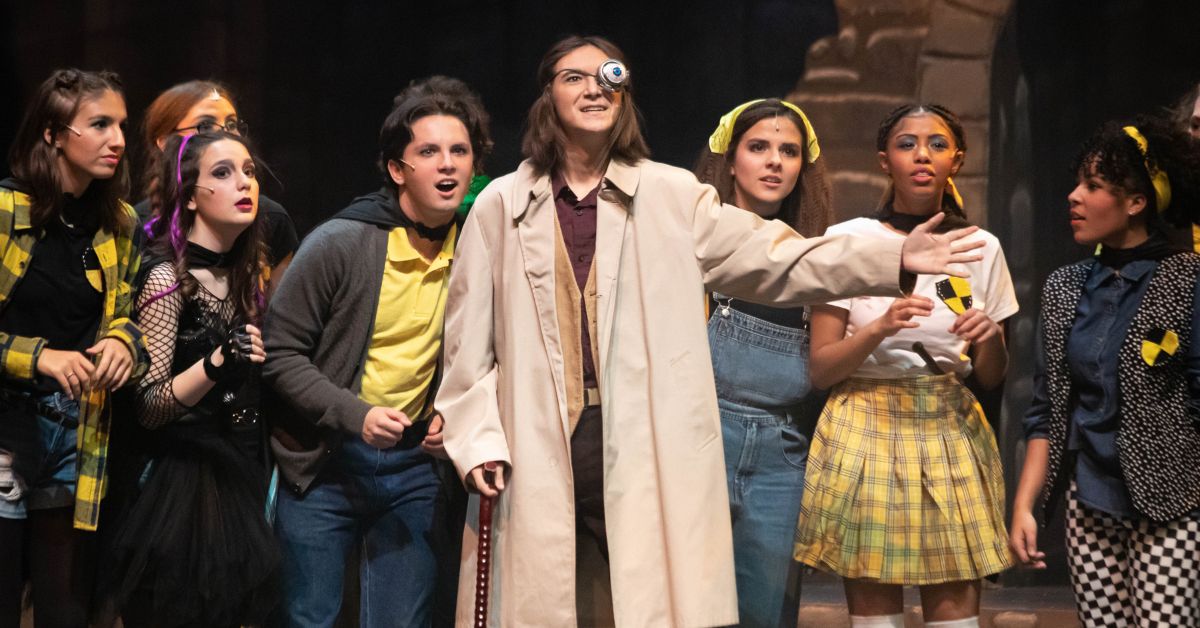 November 11 was a big night for Crown Point High School Theater. Friday marked the premier night of the school’s newest production Puffs. This fun, lighthearted comedy is set in a world of wizards, but it is not about the famous Boy Who Lived with a lightning bolt scar on his forehead. The production focuses on a fun band of characters at the same school as the young wizard with the surname Potter.

Puffs is an ambitious show for Crown Point High School Theater. The production features around 30 cast members and has a quick pace.

“This cast is about 30 people, which for any show that's rather large,” said Jill Ryan, Assistant Director of Puffs. “It’s pretty long and has multiple scenes that are pretty short, but it moves really fast.”

With the cast of Puffs being so large, all of the cast members have started to think of this year’s cast as a large family.

“With the cast this year,” said Olivia Helmuth, a student actor who plays Megan Jones. “It’s so big it feels very much so like a family. Whenever I’m having trouble with a line or a specific part, they always give very good input and they’re always super nice and supportive. It’s a very good mutual relationship that we’ve built.”

Ryan echoed the sentiment of the cast is one big family and went on to explain the atmosphere among this large cast.

“We wanted to create a really positive, fun, inclusive community for the kids here and the high school,” said Ryan. “The kids have all become really good friends and supportive of one another, and it's a really safe and good place for them to be.”

The show itself has an almost improvisational feel to it. It’s loose, fun, and really lets the actors express themselves and their styles.

“For this show, it’s a very loose show,” said Nathan Coronado, a student actor who plays the Narrator of the show. “Puffs was written as an improv show. It was written by an improv comedy group and then it was turned into a stage production. We have a lot of freedom with the script and how we portray ourselves on stage.”

The show is set to make audiences laugh. When asked about what excites them the most about the show, making the audience laugh was a common response from the cast.

“I’m just really excited to make people laugh,” said Amelia Schumacher a student actor who plays the first headmaster. “My character is just very laid back, but I just try to let loose when I’m on stage and I think it’s for the best because it ends up just being a lot of fun.”

Opening night is a fun night for all of the actors in a production. Ethan Ogrentz, a student actor who plays Oliver Rivers, described his excitement for opening night.

“Opening night is such a great experience,” said Ogrentz. “Everyone’s all running around, we’re all excited in costume, and I’m just excited to see that curtain open for the first time and to see the audience for tonight.”

The cast of Puffs has put a lot of hard work and effort into making the production the best it can be.

“We’ve worked really hard for this production. We’ve been working on it for 11 weeks now, and that’s longer than usual. It's the biggest production I’ve ever been a part of and it’s just been so much fun.”

If you want to see Puffs, you still can. The show runs on November 12, 18, and 19. Please visit the Crown Point High School Theater website for ticket information.