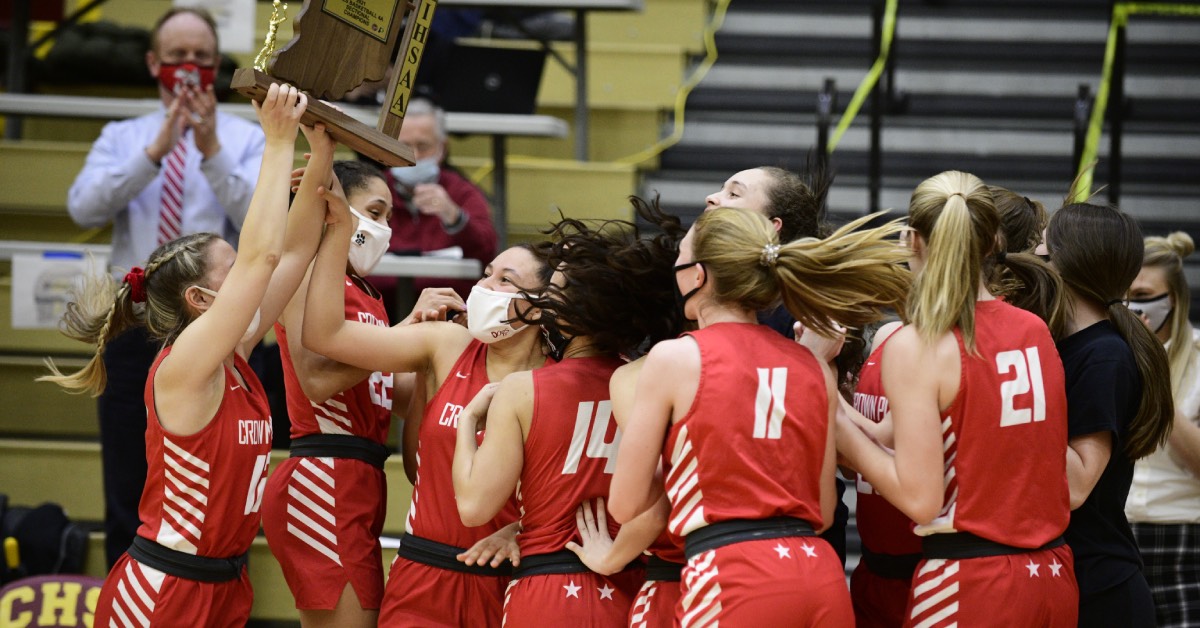 It was a game of true athleticism when the Chesterton Trojans hosted the Crown Point Bulldogs for the 2021 IHSAA Girls Basketball Sectional Championship.

Going into the game, it appeared the Bulldogs had the advantage with a season record of 20-1 overall and were undefeated in the Duneland league. The Trojans were 14-8 overall and sixth in the league. The question was if the Trojans players Emma Schmidt and Carley Balas, coached by Jack Campbell, could lead their team to victory. It was not going to be easy for the Trojans. The last time these teams met it was the Bulldogs, favored to go to the state playoffs, who came out victorious.

In their usual fashion, Crown Point won the tip-off, but unlike other games, the Bulldogs did not score quickly. The Trojans kept the Bulldogs in place with strong defense until #14 Jessica Carrothers gave the Bulldogs their first two points. Not long after, Alyvia Santiago of the Bulldogs sank the first three-point basket of the game. At the end of the first quarter, only eight points separated the two teams with the Bulldogs in the lead.

Emma Schmidt put the Trojans on the scoreboard when she nailed a two-point basket putting the Trojans within just five points of the Bulldogs.

In the second quarter, the Bulldogs gave the Trojans a taste of the fast aggressive attack they are known for. By the end of the first half, the score was Bulldogs 37 points, Trojans 11 points.

At the end of the third quarter, the Trojans found themselves further down with a score of Bulldogs 52, Trojans 18. In the fourth quarter the Trojans kept the gap from widening, but in the end they could not close in on the Bulldogs. Final score resulted in a victory for the Bulldogs with Bulldogs 67 points, Trojans 34 points.

While the points were evenly distributed amongst most of the Bulldogs, Jessica Carrothers came out asthe high scorer with an impressive 31-point game that led her team to the sectional victory.

Emma Schmidt finished her Trojan career as their game high scorer with 14 points. She was tearful stepping off the court for the last time.

“The seniors tell us every year how fast it goes, and they are right. In a blink it’s gone,” said Schmidt after the game.

“It started off a shaky year, but then at the end we came together better than I have ever seen in my four years,” said Schmidt in reflection. “This season beating Valpo in sectionals is the best feeling ever.”

The senior wants to be remembered as a leader for the younger players and had advice for the upcoming seniors.

“You have to play your hardest each and every game,” said Schmidt. “Don’t stop, don’t quit, no matter what anyone tells you.”

Coach Seibert was allowing his team a night of celebration before they go back to work Monday. He was proud of the hard work his team has put in.

“This never gets old. Winning sectionals in Indiana is such a hard thing to do,” said Coach Seibert. “To be able to watch those kids step-up the ladder and cut down that net, and all of their hard work to come to fruition, it’s a great thing as a coach.”

The Bulldogs will face off against the La Porte Slicers in a Regional playoff game on February 13 at 2:30pm.