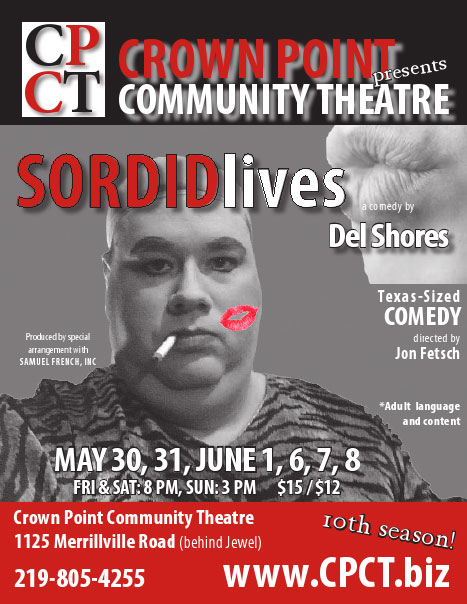 Opening May 30 and running weekends though June 8, Sordid Lives looks at eclectic family members and their friends who hail from a small southern town. The diverse group comes together following the bizarre and controversial death of a beloved matriarch. The ensemble cast puts a comedic twist on a story of unconditional love, acceptance and “coming out” in a Texas family, as they all converge for the matriarch’s funeral. The eccentric characters include a mother wound too tight and in denial over her gay son, a barfly/singer at the local watering hole, a cheating heart whose wooden legs accidentally aid in the death of his mistress, and a dozen others too unbelievable to mention. Chaos erupts when the cheating heart’s wife tries her hand at revenge therapy inspired by “Thelma & Louise” along with her best friend. Their lives intertwine, giving each a new perspective, honesty and meaning.

Sordid Lives was penned by stage, film and television writer and director Del Shores, whose credits include the award–winning play Daddy's Dyin': Who's Got the Will and small–screen episodes of "Queer as Folk," "Touched by an Angel" and "Dharma and Greg." Sordid Lives made its debut on stage in Los Angeles in 1996 before making its way to the big screen four years later, with a cast including Delta Burke, Beau Bridges and Olivia Newton-John. It was also adapted for the small screen as a sitcom in 2008, running for a year on LOGO Network.

“I have loved the show from the beginning. It is a hilarious piece,” says Fetsch, who not only directs, but appears in the show as Brother Boy. Fetsch first discovered the play upon recommendation by a friend, and directed scenes from the show for a class he took at Purdue Calumet. This production marks his directing debut in community theatre.

“The show has some touching moments,” says Fetsch. “That is what I liked about it, that outrageous humor and the moments of tenderness and raw emotion.”

“Another reason I love this show is because it is an ensemble piece. The cast gets to be very close knit and all can have lots of fun with the characters and each other.”

Due to adult language and themes, Sordid Lives is recommended for mature audiences only. Tickets are $15 each, or $12 for students, seniors, or military personnel with valid ID.

All CPCT productions take place in CPCT’s black box theatrical space, a 2,500-square-foot storefront located at 1125 Merrillville Road (on the southeast corner of the same shopping plaza as Jewel, Bronco’s Restaurant, and other businesses). Tickets are available online through the CPCT website, CPCT.biz, or by calling (219) 805-4255.