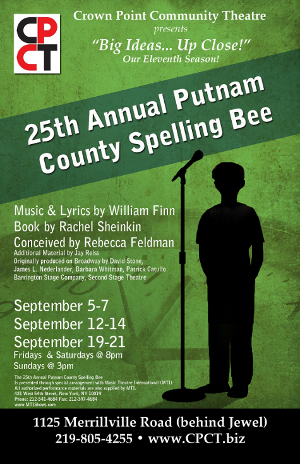 Get out your dictionaries! The Tony® Award winning musical comedy, The 25th Annual Putnam County Spelling Bee - one of Broadway's most buzzed about hits - is in attendance at Crown Point Community Theatre (CPCT), weekends September 5-21, 2014.

Set in a school gymnasium, Spelling Bee takes a hilarious and heartwarming look at the pressures of growing up through the eyes of quirky yet lovable characters competing for the title of spelling bee champ. The show follows six young people in the throes of puberty, who are overseen by grown-ups who barely managed to escape childhood themselves, as they learn that winning isn't everything and that losing doesn't necessarily make you a loser. With its enormously appealing cast of lovable misfits, nerds, neurotics (and no jocks), Spelling Bee hilariously captures the angst, exhilaration, and heartache that makes growing up so painful and so wonderful.

Spelling Bee has music and lyrics by William Finn, a book by Rachel Sheinkin, conception by Rebecca Feldman, and was originally directed on Broadway by James Lapine. Nominated for six Tony® Awards including Best Musical - it took home two 2005 Tony Awards for Best Book of a Musical and Best Featured Actor in a Musical.

The New York Times has called Spelling Bee “irresistible, riotously funny and remarkably ingenious …” At each performance, four audience volunteers are selected and invited on stage to participate in the Bee (strictly voluntary, of course), making each performance unique. Due to some content, The 25th Annual Putnam County Spelling Bee is recommended for theatergoers 13 and over.

All CPCT productions take place in CPCT’s black box theatrical space, a 2,500-square-foot storefront located at 1125 Merrillville Road (on the southeast corner of the same shopping plaza as Jewel, Bronco’s Restaurant, and other businesses). Tickets are available online through the CPCT website, CPCT.biz, or by calling (219) 805-4255. Those interested in purchasing tickets at this time may also purchase season tickets; packages start at $72 for six mainstage productions, with additional deals available for family shows and our annual Courthouse Drama at the Old Lake County Courthouse. Compared to regular ticket prices, season tickets save patrons the cost of an entire show over the course of the year. Season tickets are available for purchase by contacting our box office at (219) 805-4255. 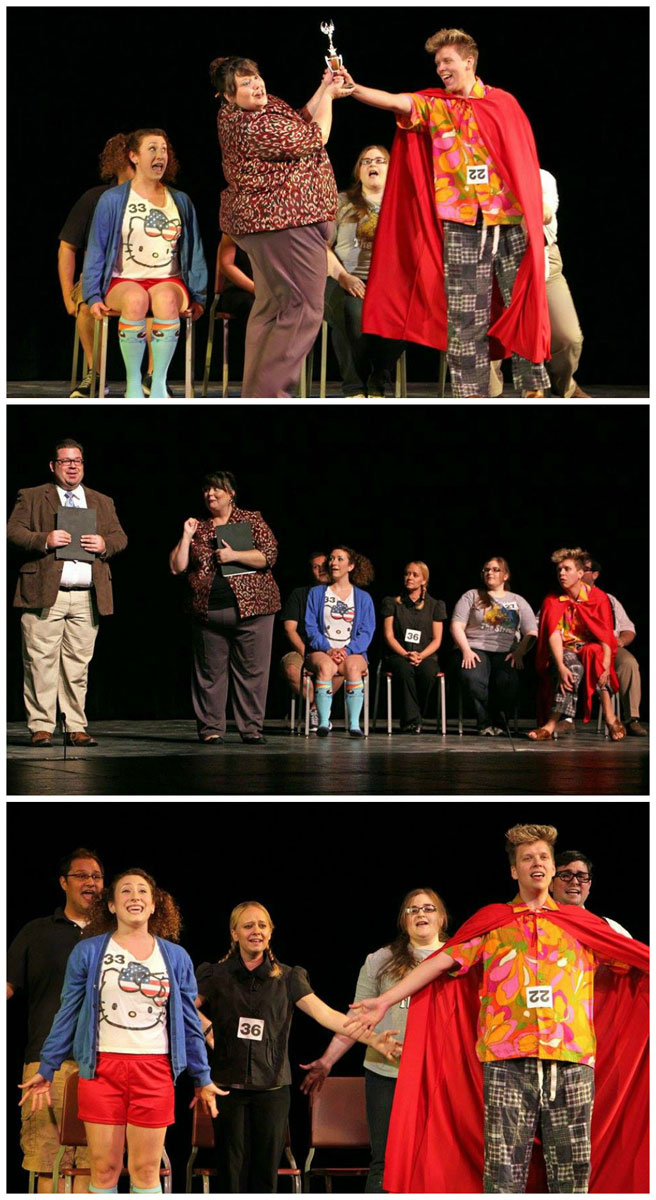