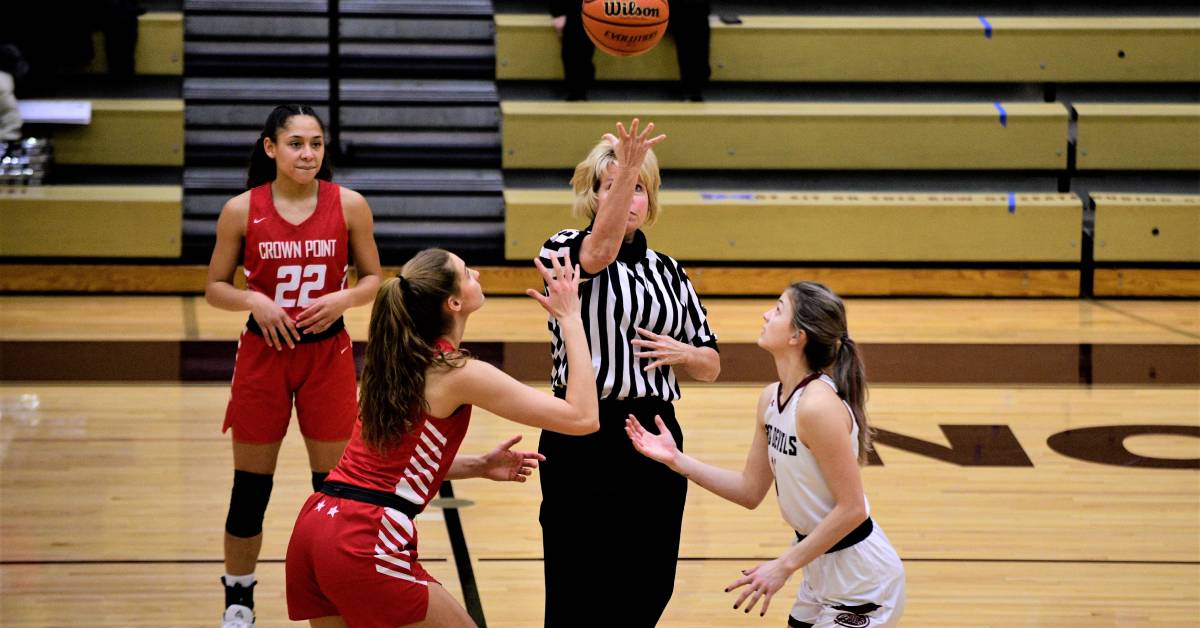 The Crown Point Bulldogs took on the Lowell Red Devils in the girls sectional playoffs at Chesterton High School.

The Bulldogs, who were 18-1 overall for the season and undefeated in the Duneland Athletic Conference, were heavily favored to win against the Red Devils who had an overall record of 9-12 and were 1-4 in the Northwest Crossroads Conference.

Despite the team stats, Bulldogs Head Coach Chris Seibert was not taking any chances.

“Lowell is very well-coached and has a good team. We will have our hands full for sure,” said Seibert before the game. “Our kids have been through this the last few years of post-season runs, and hopefully, they have learned from that, and we come out ready to play tonight.”

From winning the tip-off the Bulldogs took an early lead when Freshman Nikki Gerodemos scored back-to-back two-point baskets. The Red Devils held tight initially. When a full time out called with 2:40 left in the first quarter, Lowell had two points Crown Point eight points.  After a brief talking to by Seibert, the Bulldogs returned to the court strong and quickly pulled away. The first three-point basket of the game was claimed by Bulldogs’ #10 Alyvia Santiago. But the exciting moment came when #12 Mia Depta of the Bulldogs sank a three-point bucket at the buzzer ending the quarter with the Bulldogs up 22 points, Red Devils 2 points.

In the second quarter, Crown Point continued to pull ahead. The crowd erupted in excitement when #10 Santiago of the Bulldogs was fouled while sinking a two-point basket. She successfully completed her free throw and by the end of the first half of the game, the Bulldogs had earned themselves 41 points and the Red Devils seven points.

Top of the third quarter, the Red Devils showed the Bulldogs they were not giving up when #22 Payton Gard scored a two-point basket. Despite the pressure by Lowell, Crown Point continued to pull ahead ending the third quarter with a score of Crown Point 53 points, Lowell 13 points.

In the fourth quarter, it was apparent the Bulldogs would likely be the victors, but the Red Devils were all smiles as they kept the pressure on the Bulldogs. It was a bittersweet moment when with just minutes left in the game, Red Devil seniors subbed out and stepped off the court one last time. All in attendance, even the Bulldogs and their fans stood and clapped in appreciation and respect as seniors Katelyn Budz, Jordan Yuhasz, and Alexis Horton hugged Head Coach Kelly Chavez. Chavez had coached them since eighth grade.

The final score resulted in a victory for the Bulldogs and advancement in the sectional playoffs with the Bulldogs at 70 points and Red Devils at 20 points.

“We always give 100%,” said Chavez after the game. “This is a great group of girls, but unfortunately, this season just wasn’t ours.”

Chavez choked up upon reflecting on the five years she had coached the now graduating seniors.

“I love my seniors. I don’t want to lose them, and I don’t want to see them go,” Chavez said.  “I have a great group of seniors. I have one that doesn’t play much, but she gives me everything, and the other two are amazing athletes and have grown to be such team leaders and captains. I have created a bond with them I just can’t describe.”

Seibert was happy with the Bulldogs' performance.

“I was glad to see the girls go out and play hard, play together, get a win, and be healthy going into the next game,” said Seibert.

The Bulldogs advance to play against the Hobart Brickies on February 5 at 7:45 p.m. at Chesterton High School.