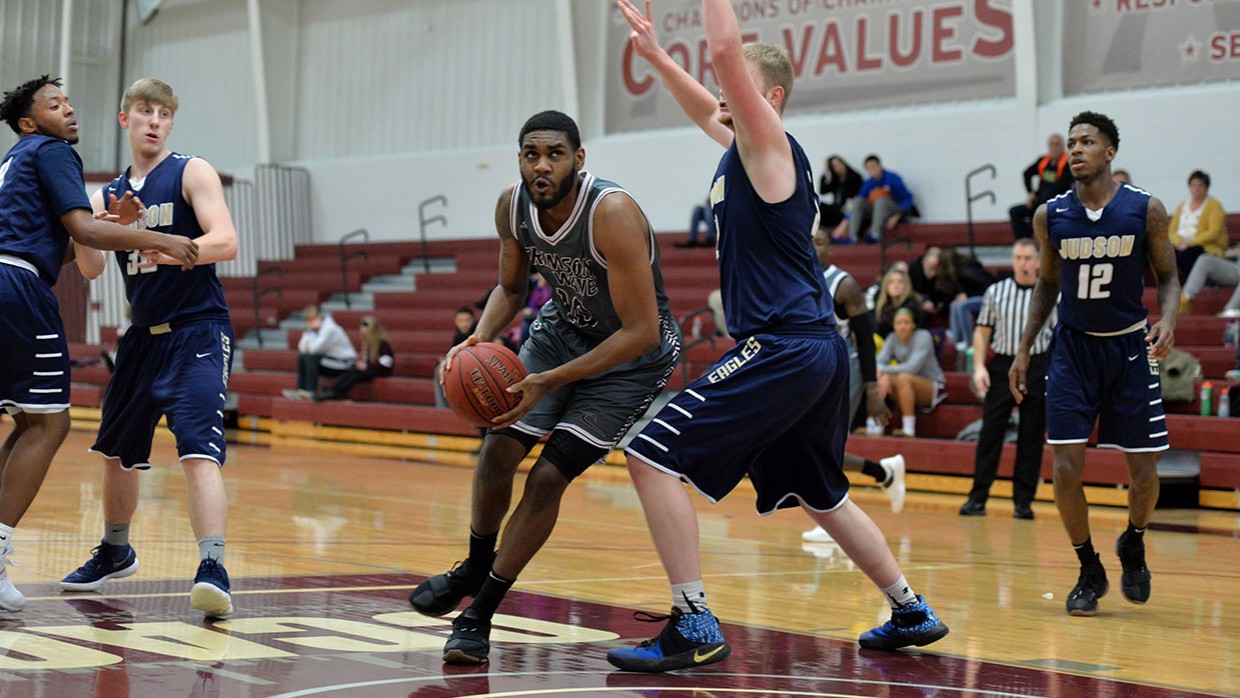 After winning their last two games by 11 points or more, the Calumet College of St. Joseph men's basketball team was due for a nail-biter. They definitely got on. Down for almost the entire second half, the Crimson and Gray rallied to take back the lead and hold off the Cardinals of Andrews University for their tenth win of the season on Tuesday night at the Rittenmeyer.

HOW IT HAPPENED
Just like their game six days ago against IU-South Bend, CCSJ (10-0, 3-0 CCAC) couldn't find a way to pull ahead and obtain a substantial lead against Andrews University (4-3, 0-0 USCAA) in the first half of this ballgame. Both teams shot well from the field, and Cal College won the three-point battle 42.9 percent to 14.3, but the difference came down to shots from the charity stripe. The Cardinals got to take seven shots from the line, making five of them, while the Wave hit their one and only. The Crimson and Gray led by six with 3:45 left to play before halftime, but a 5-0 run let AU whittle that down to one when the buzzer sounded.

The Cardinals would hit back to back free throws with only 22 seconds elapsed off the game clock in the second half, taking a one-point lead that they would not relinquish for almost 16 minutes. For every shot that the Wave made, Andrews would follow up with one of their own. They were also able to take advantage of the six Wave miscues in the second frame, growing their lead to 11 at one point. A Core'Von Lott (FR/Gary, Ind.) three pointer with 2:04 left on the clock would give the Crimson and Gray their first lead of the second half, and Chris Seaton (JR/Chicago, Ill.)'s jumper at 1:21 gave them the lead for good. Lazono Trammell (JR/Chicago, Ill.) hit the front end of his one and one opportunity to put CCSJ up by three, and AU's only attempt to tie the game failed, giving the Wave the 72-69 win.

STAT OF THE GAME
To one looking at just the box score, this game would have resembled something along the lines of hot potato. There were 13 different lead changes, with each team leading by at least eight points at different points in the game.

WHO'S ON DECK?
All that stands between the Crimson Wave and their 11th win of the season is Robert Morris University. They will square off against the Eagles at 3:00 pm on Saturday afternoon in Chicago.