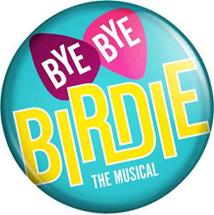 BYE BYE BIRDIE is one of the most captivating musical shows of our time. It tells the story of a rock and roll singer who is about to be inducted into the army. The singer, Conrad Birdie, an Elvis Presley type, has a pompadour and thick sideburns; he wears gaudy gold costumes and speaks in a rugged voice. Albert Peterson, his agent, is a very pleasant mild mannered young man. Albert's faithful secretary Rose Alvarez keeps him and Birdie moving forward in the world. Rosie concocts one final national publicity plan before Conrad's induction.

Conrad will bid a typical American teen-age girl goodbye with an all-American kiss. Kim MacAfee in Sweet Apple, Ohio wins the honor. All of the phones in her town are already busy during The Telephone Hour as Kim has just been pinned to Hugo, a local boy. She is a pretty girl of fifteen and sings with springlike ardor How Lovely to Be a Woman, as she pulls on the plaid woolen socks and the baggy mustard colored sweater considered stylish and popular among young ladies.

The arrival of Birdie in Sweet Apple causes people of all ages to swoon. Birdie says that his success is due to the fact that he is Honestly Sincere when he sings, and the quiet little town goes into a spin. The MacAfee household is completely upset by the visiting celebrity. It is decided that Birdie will give his One Last Kiss on the Ed Sullivan show. Kim's father who laments the whole uproar, tries to break into the act and behaves like a ham on the TV show. Hymn for a Sunday Evening is a salute to the greater glory of Ed Sullivan.

Birdie becomes disgusted with his life and goes out on the town with the teenagers. He feels tense with Albert and is tired of being supervised. The parents of Sweet Apple cannot understand the new generation and express this in Kids. Rosie, still waiting for that band of gold from Albert after eight years, invades a Shriners' meeting. An extremely hilarious ballet ensues. She then decides to become the Latin American spitfire that she is painted as, by Albert's lead-footed catastrophe-ridden mother. She is determined to become Spanish Rose. Kim is reunited with Hugo, and Rose with Albert in the lovely number Rosie. Other hit numbers include A Lot of Livin' to Do and Put on a Happy Face.

BYE BYE BIRDIE is a satire done with the fondest affection. It gives an insight into the everyday life that is very much part of us all. It is the tops in imagination and frivolity; a show that will be enjoyed by the cast as much as the audience.