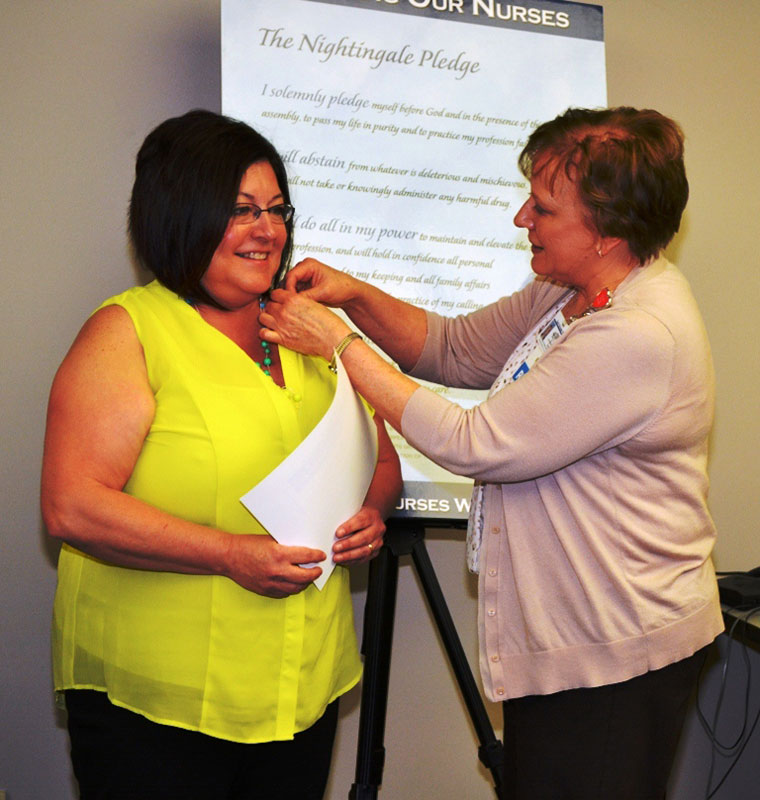 Patti Pirkle, R.N. (left), a 34-year Neonatal Intensive Care Unit nurse who has been with Franciscan St. Anthony Health-Crown Point since 2011, after starting her career at Franciscan St. Margaret Health-Hammond, receives an honorary pin as part of Franciscan St. Anthony’s 2014 Nightingale Award, from Carol Schuster, Franciscan Alliance regional chief nursing officer. As an observance of National Nurses Week in May, the hospital’s Professional Development Council of Shared Decision Making annually chooses a winner from among nominees, of which there were four this year.

Among nominee comments, Pirkle was said to have “ultimate compassion” for patients and families, is the first in the unit to take fragile newborns on ventilators from their beds to their mother’s arms and is “always” sought out by parents who visit the unit to show a child’s progress after release from the hospital. Pirkle, of Schererville, expressed gratitude and love for her parents, husband and children, patients and their families, hospital administration and coworkers. “God steered me to the NICU and I am truly blessed,” she said. The award is named for legendary nurse, Florence Nightingale, who is called the founder of modern nursing.