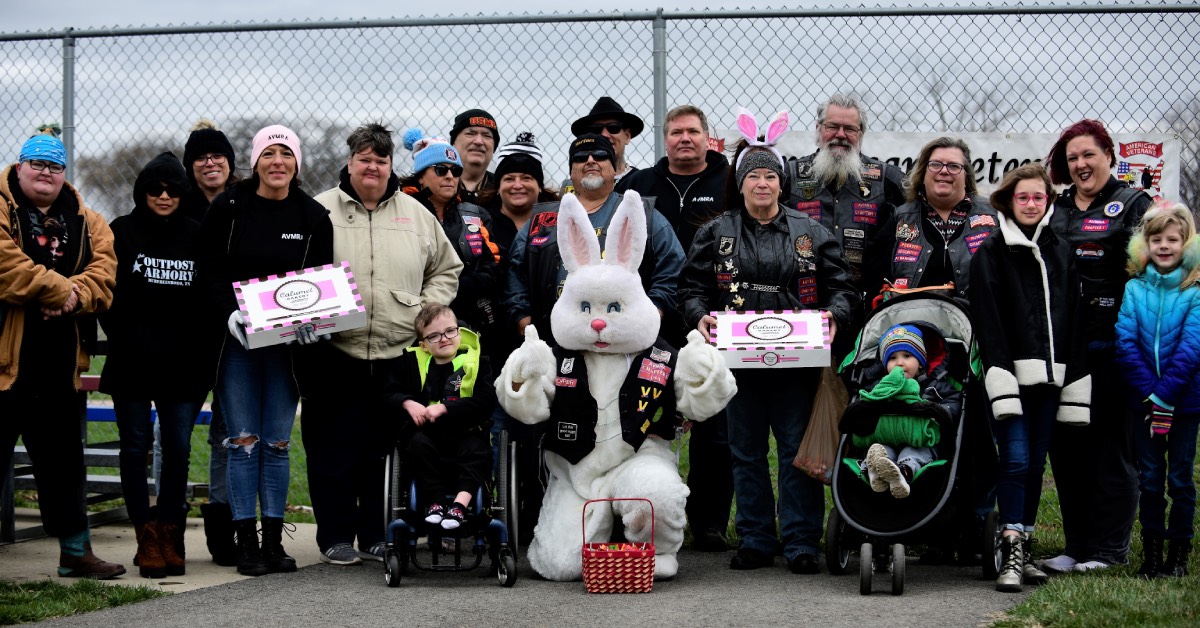 It was cold and windy on Sunday morning, but nothing was going to stop the American Veterans Motorcycle Riders Association (AVMRA Ch.1) from hosting their 17th Annual Easter Egg Hunt. Held in Hessville Park in Hammond, the event was sponsored by Mayor Thomas McDermott Jr., Hammond Parks Foundation, Inc., and Calumet Bakery.

Children ages zero to 12 gleefully ran about with rosy cheeks collecting their colorful egg treasures. Volunteers had been out in the chilly wind hours in advance to set-up the event.

Barb “Pocahontas” Regina, a member of AVMRA, has helped every year.

“I love the togetherness. Bringing back to the community, giving the kids something to look forward to, that’s what it is about,” said Regina.

Event Organizer Gina Seitz has been involved almost every year. Prior years had been out in the park, but after concerns of the close approximately to the road, the City of Hammond graciously donated the fenced-in baseball field for the event.

“I just love that this gets bigger and bigger every year for the community,” said Seitz. “We have a lot of volunteers. Calumet Bakery donated ten dozen donuts to the event. The kids just love this and look forward to it every year.”

This year included a new special needs section that provided ample opportunity for all to enjoy the event.

Five-year-old Seth Lenker, who has spina bifida, was excited for the egg hunt. While he was hoping to receive anywhere from five to a thousand eggs, there was a special one he had in mind.

“I want one with a bunny on it!” said Lenker.

Lenker, the grandson of an AVMRA member, and a board member’s autistic child were the main inspiration for the addition of this new section.

“I received so many calls of parents looking forward to it,” said Seitz.

Lauren Plantz was there with her six-year-old daughter. She heard about the event from her mother. Plantz had brought her daughter when she learned there would be a special needs section.

“That’s why I decided to come,” said Plantz. “I thought it would maybe be something that is a better fit for her.”

It was evident from the smiles and basket full of eggs that her daughter had indeed had fun.

Three-year-old Ryker Mathews looked through his eggs after the event. He did not win a basket, but he was hopping up and down with happiness nonetheless. His mother, Taylor Mathews, brought him to the event after seeing it suggested online.

“It was a lot fun and it was nice. I really liked it,” said Mathews.

Rosie Murphy had brought her three daughters, and this was their first year participating. Murphy is employed at Purdue University Northwest and her husband owns a local business, ultimately leading them to be involved in the community at events like these.

“They are now at the age we can do something fun like this,” said Murphy.

With her daughters deeming it a fun event, Murphy plans to return with the girls next year.

For information on more upcoming events, be sure visit the City of Hammond’s website at Gohammond.com.