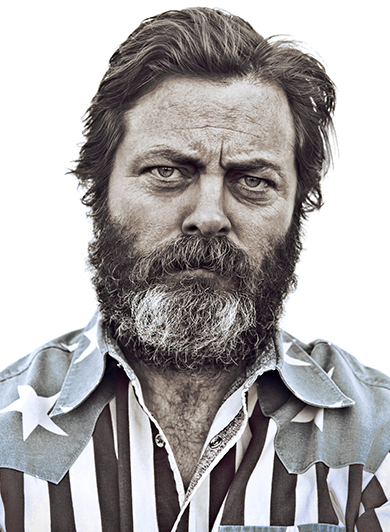 Comedian Nick Offerman of NBC's "Parks and Recreation" will bring his "Full Bush Tour," with comedian Ahmed Bharooka, to Elliott Hall of Music at 8 p.m. on Oct. 24. This performance is presented by the Purdue Student Concert Committee with support from the Student Fee Activities Board.

An Illinois native, Offerman earned his theater degree from the University of Illinois. He then moved to Chicago, working with such Chicago theater companies as Steppenwolf and Goodman, co-founding the Defiant Theatre and befriending future "Parks" co-star Amy Poehler in the city's improv scene. Offerman received Joseph Jefferson Awards for his performance in "The Kentucky Cycle" at Chicago's Pegasus Players Theatre and for puppets and masks he created for the Defiant's "The Skriker." His stage work also includes the off-Broadway play "Adding Machine," and the play "Annapurna" (alongside his wife, Megan Mullally). He's also a member of the Evidence Room Theater Company in Los Angeles.

In 2009, Ron Swanson - the alternately curmudgeonly and cuddly parks and recreation director in fictitious Pawnee, Indiana - gave Offerman his breakout role and immediate pop culture icon status. For his work in the series, scheduled to air its seventh and final season in 2015, Offerman has won a Television Critics Association Award for Achievement in Comedy and two Critics' Choice Television Award nominations for best supporting actor in a comedy series.

Offerman also has a bustling, diverse big-screen career. He's recently been seen (or heard) in comedy blockbusters "22 Jump Street," "The LEGO Movie," "We're the Millers" and "21 Jump Street." He has also appeared in "In a World …" "Paradise," "The Kings of Summer," "Casa de Mi Padre" and "Smashed." Offerman also produced and starred in "Somebody Up There Likes Me," a 2012 South by Southwest Film Festival hit, and his previous standup tour, "Nick Offerman: American Ham," was chronicled in a film of the same name. He'll next be seen in director Terrence Malick's "Knight of Cups" and in "A Walk in the Woods," an adaptation of Bill Bryson's bestselling memoir.

Ron Swanson's affection for woodworking isn't coincidence, either. At Offerman Woodshop in East Los Angeles, Offerman and his team create furniture, small boats, pinball machines and anything else that tickles their fancy.

Offerman is also an author. Dutton published "Paddle Your Own Canoe: Nick Offerman's Fundamentals for Delicious Living" in 2013.

Ticket information
Tickets are $30 for students and $35 for the general public, with a limit of six tickets per person.

Friends presale: Seating for Friends of Convocations is very limited for this performance. Orders may be placed by calling 765-494-3933 by 5 p.m. Tuesday (Aug. 26). Orders will be taken on a first-come, first-served basis until tickets are unavailable. There is a limit of six tickets per household. Friends of Convocations will be seated in the best available location using the priority point system. For more information about priority points, visit convocations.org/prioritypoints