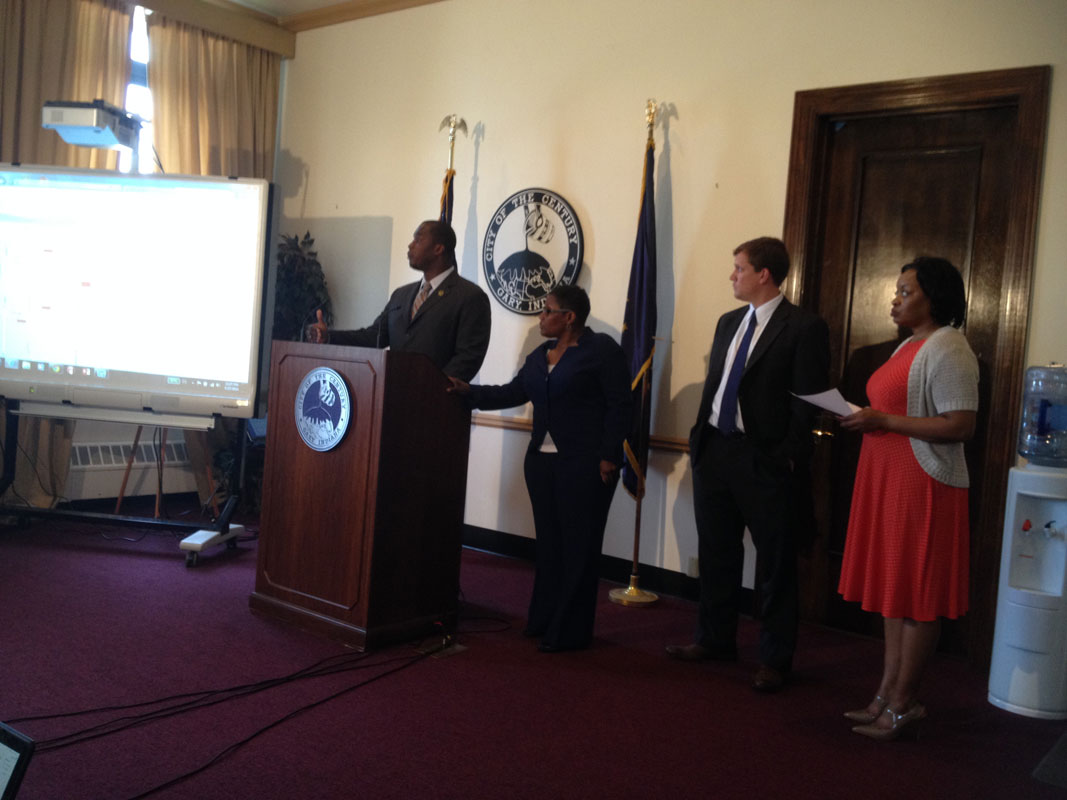 Last week, Lt. Governor Sue Ellspermann announced that five Indiana cities received a combined award of more than $15 million to help eliminate blighted and abandoned homes in those communities through the Hardest Hit Fund Blight Elimination Program (BEP). The City of Gary was a successful applicant and will receive $6.6 million.

Today, Gary Mayor Karen Freeman-Wilson held a press conference to share how the dollars would be allocated throughout the city.

“While we are very excited about receiving these dollars, we wanted to manage the expectations of our residents,” said Freeman-Wilson. “Part of the application process was to identify abandoned structures that were in the worst condition and submit them for consideration. More than $60 million worth of demolition is needed in our city. This $6.6 million is a tenth of that, so people need to understand that not every abandoned structure will be knocked down at this time.”

Mayor Freeman-Wilson went on to share that the 379 homes that were submitted were selected for several reasons including opportunities for redevelopment in targeted neighborhoods.

“We felt it made sense to identify structures that are in footprints where development is already being planned,” said Freeman-Wilson.

Some of the neighborhoods identified for demolition projects include, Aetna, Glen Ryan, Miller, Emerson, Horace Mann, Marshalltown, the far west side and University Park.

Chief of Staff Richard Leverett also confirmed that with the investment of these funds, other dollars are now freed up for more demolition.

The next step in the process will include the city having a public hearing with the State of Indiana to go over each of the submitted properties. The State will determine the first 20 properties for demolition. Within, the next 45 days, requests for bids will begin going out for contractors to apply for demolition projects.

“Per our city ordinance, the contractors will be required to hire a percentage of Gary residents,” said Freeman-Wilson. “This is a significant amount of dollars, and we want to make sure that those who live in Gary get the first opportunity to secure employment.”

In addition to the demolition activity, the funds will also provide for the upkeep of the land where the houses are demolished for the next two years. Director of Green Urbanism and Environmental Affairs Brenda Scott-Henry said this will equal job opportunities as well.

“We will need people to cut grass, contractors for landscaping and those types of activities to care for these properties once the demolition has taken place.”

Freeman-Wilson stated the ultimate goal is to have end uses for the vacant spaces which may include new housing, green spaces, urban gardens and commercial development.