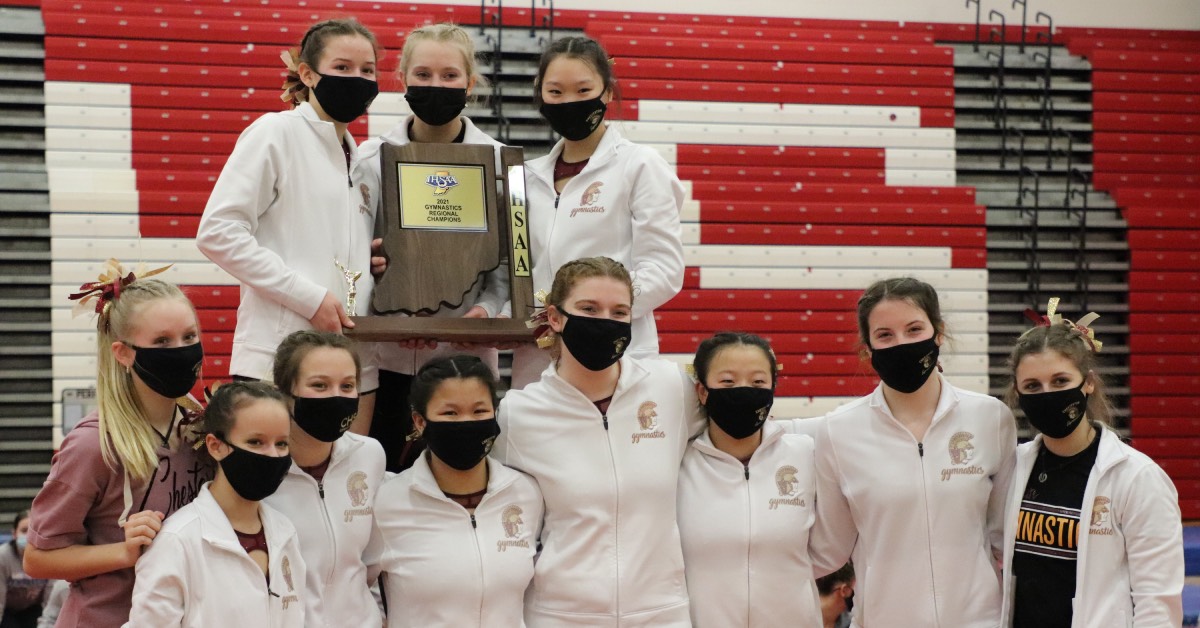 After many practices, competitions, and the bruises that come along the way, high school gymnasts within the region gathered together to compete in the 2021 Gymnastics Regionals held at Portage High School. Parents, officials, and gymnastics lovers gathered to watch the girls in what was one of the last competitions of the year.

For Lia Milroy of Regions Sports Network, this competition was an opportunity to participate in the sport from a different perspective. As a former Valparaiso gymnast, she enjoyed watching the Vikings as well as the schools she used to compete against as she worked to broadcast the event.

“Actually, Mrs. Cook asked me if I would work with them today because I’m a former gymnast. I’m so passionate about this sport, and I love coming back to watch and help in any way that I can,” Milroy said.

She was proud to see the teams working hard with the same passion she has for the sport, and she was happy to see the Vikings place third overall in the competition.

“I have such a love for Valpo gymnastics, the coaching staff, and the program as a whole,” added Milroy.

Placing second place at the regional competition was Lake Central, and in first was Chesterton. While all athletes cheered on their teammates, none cheered quite so loud as Chesterton while their teammatesexcelled in each event. After many of those successful performances, Chesterton teammates and coaches would swarm the competitor and place a crown on her head.

“That is called a stick crown, so every time you stick your routine, you get the crown,” said Head Coach Christy Dzierba. “Then you get to pass it on to the next one when they stick, so it’s a good incentive for them to stick it.”

One athlete who donned the stick crown time and again at today’s competition was Chesterton Senior Mia Pak. She placed within the top two in each event, landing her first place all-around with an impressive 39.200.

Shouts of, “Go, Mia!” accompanied her wherever Pak went, and she was grateful for the support.

“It’s really good to have such a supportive team because without them, we wouldn’t be where we are today. It’s so good to have people to fall back on,” Pak said.

Watching her teammates compete today, Pak was proud of how well they represented themselves, their team, and their school.

“After coming third last weekend in the team score, we wanted to come into this week confident that we could win, and we did that,” Pak said. “I’m really proud of them and how hard they’ve been working. Me, Christy, and all the coaches have been pushing them so hard, and it’s really showing.”

Dzierba was also pleased with the team’s effort today and anticipates they will do even better at the state competition next weekend.

“They’ve been working really hard trying to add in new stuff,” Dzierba said. “Everyone wants a spot to compete, and they have the drive. They want it. We’re slowly getting there, we haven’t really piqued yet, so hopefully next weekend we will!”

Spectators can watch the teams and individuals in the Region compete at the state competition at Ball State University with the opening ceremonies starting at 12:30 p.m. EST and the competition starting at 1 p.m. EST.