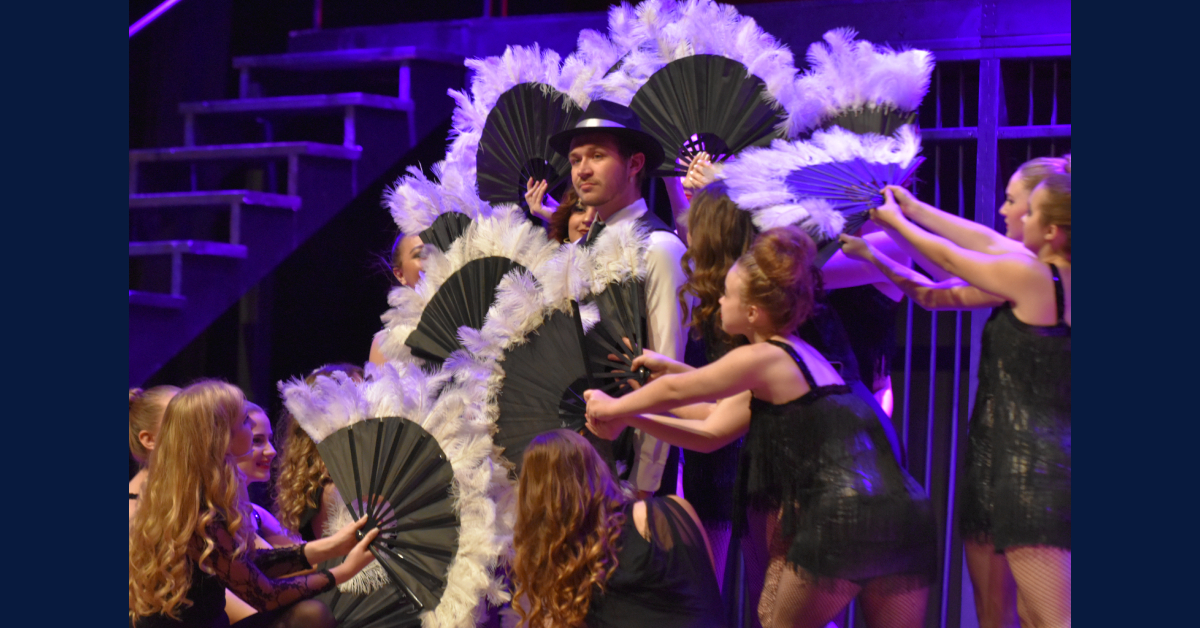 It was an enthralling night for all ages as theatergoers watched the Chesterton High School production of the musical “Chicago.” While on stage it was lies, betrayal, and murder, while backstage there was only love and support for each other.

Rebecca Lane, who plays Velma Kelly, was appreciative of the cast.

“The entire cast is phenomenal and kind. We have been working hard so it’s one of the smoothest running productions that I have been a part of in my four years with Chesterton High school,” said Lane. She attributes the success to the cast's hard work as well as their director. “Ms. Morris runs things so that it goes smoothly and cohesive.“

Lane’s favorite part is the song “I Can’t Do This on My Own.”

“It’s a very silly number where Velma is essentially begging Roxy to come and do an act with me, to make myself more popular because Roxy is stealing the spotlight from me. I get to persuade her to do this fun dance routine,” said Lane.

Paige Fowler who plays Roxy murders her lover and tries to convince her husband to take the blame but instead ends up in jail.

“This is probably the biggest part that I have ever had to play in my high school career,” said Fowler. “I played a big part in the spring play last year. Personally, because it’s a musical, this was easier to memorize because of the music.”

There is one part Fowler looks forward to the most.

“The song ‘When We Both Reach for the Gun’ is one where I don’t really sing but I get to be a puppet in it. Billy, my lawyer, is twisting my story to make me seem innocent and a wonderful person when I am really not," said Lane. “It’s a very fun show. It’s very exciting to watch. It’s probably the most dancing show that this high school has ever done. The costumes are well done and everyone was very well casted.”

Roxy’s husband, Amos, is played by Dylan Leavitt. Leavitt is also an ensemble member and he too enjoyed the dancing element.

“It’s been a while since I have been in a dancing musical so it was fun to get back in my dancing shoes and unlock that part of myself I haven't really explored for a while,” he said. For Leavitt, there was more to his role than just the dancing. Leavitt says he strives to tell the story in a way the audience connects and finds something in themselves relating to his character.

Families reconnected to come and support their favorite cast and crew. Distance was no obstacle for Keven Schmidt’s family. His grandmother came in from Chicago while his Uncle Steve and Aunt Roe came in from New York.

Schmidt’s father, Keith, could not narrow down one favorite moment when watching his son.

“I like his overall interaction,” said the proud father.

Diana Atrosh-Ciszewski was there to watch her daughter Abby work the spotlight. While Abby enjoyed the challenge of keeping up with dancing she did have a favorite song.

While Chicago is not a common musical some high schools would take on, Executive Director Kristin Morris had the actors in mind when she selected the musical.

“I haven’t done a huge show with this much dancing and in this style before, so when I was looking at pieces I thought this would be so much fun,” said Morris.

Morris said the show was not without its challenges.

“Most plays have a 10-week production window and we did this in only eight weeks with only about 30 rehearsals. The challenge was dancing as they really dance-heavy. Scheduling that into the normal process that we do was a bit of a challenge.”

Drew Nellessen, a cast member from the actual Chicago musical, took a break from the Broadway production to come watch and listen to his cousin play the trumpet.  Before the show, Nellessen surprised the crew backstage, leaving the normally talkative crew in awe and speechless. Nellessen had important advice for the performers and crew.

“Your value is not at stake with what happens on stage tonight,” Nellessen told them.

While many had their favorite moments or songs, there is always one that stands out for Ms. Morris.

“It’s amazing to watch the bonds they form from the first rehearsal to the closing tomorrow. That’s my favorite part to watch how they progress as a unit.”

Theatergoers have one more opportunity to see Chicago on Sunday, November 17th at 2 p.m. in the school’s theater. Tickets can be bought at the door.