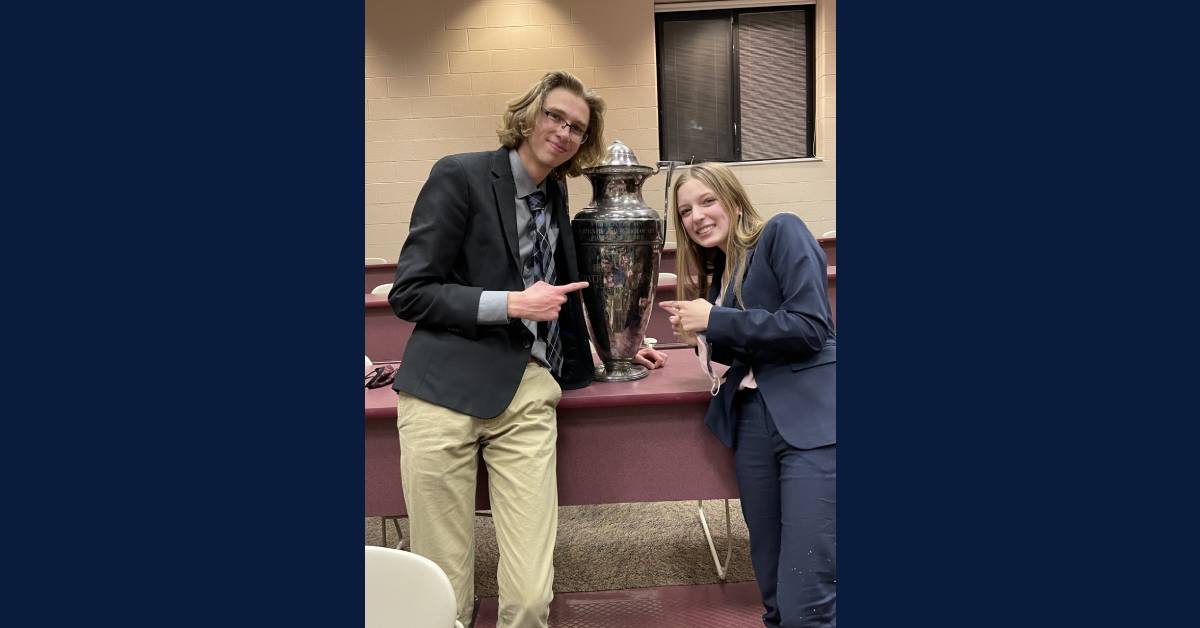 Policy debate has continued to be a strength for CHS.  Milena Veltri and Mark Jewison were the last team standing after winning their final round against Carmel high school by a 3-2 count.  Veltri and Jewison, both juniors, were among the favorites going into the event and are the first team in the past five years to win while representing the negation side of the resolution during the final round.  This year’s topic was criminal justice reform.  This is the fourth state title in a row in Policy Debate and the sixth in the past seven years.  Ethan Dibble and Ryan Donovan, last year’s state champions, were the one seed coming out of prelims before being upset by a 2-1 decision in the Quarterfinal round (top 8).  Freedom Eiden and Jonathon McClure were also Quarter Finalists and dropped to the state runner-up.

Senior Bella Aurrichio reached the semifinal round to finish in third place in Lincoln-Douglas after she dropped on a 2-1 decision to the eventual state champion from Park Tudor.  Aurrichio was joined in the elimination rounds by Hattie Hoham and Nathan Osborn, both of whom lost 2-1 decisions in the Octa Final round (top 16).  The Lincoln-Douglas debaters have spent the last month arguing about what nation-states ought to do regarding lethal autonomous weapons.

Peyton Day advanced to the final round in Congressional Debate and managed to place 9th overall.  Day, a junior, sailed through the preliminary rounds and continued into finals by placing top four in the semi-final round.  Teammate Trina Gonzalez made it to the semifinal round (top 24).

The Public Forum team advanced two into the elimination portion of the competition.  The team of Sidney Pittman and Emma Ekblaw as well as Tim Wheeler and Luke Vetroczky each lost 2-1 decisions in the Octafinal round; leaving each team as a part of the top 16 in the state.  Public Forum has spent the past month debating domestic surveillance by the National Security Association.

The tournament was won by Munster High School, their first state title since they tied for first with CHS in 1994.  Carmel came in second place and West Lafayette was two points ahead of the trojans in third.  Program director, Chris Lowery, says that he is proud of his students.  “These students stayed with us through an incredibly challenging season.  I don’t think that there is a single member of our team that preferred the virtual setting that they were forced to compete in all year.  Our state team stuck with it and gave themselves a chance at defending last year’s state championship.  Speech and Debate is so subjective that these close decisions and top tournaments depend upon having everything exactly right and I think that the pandemic threw all of us off of our normal.”