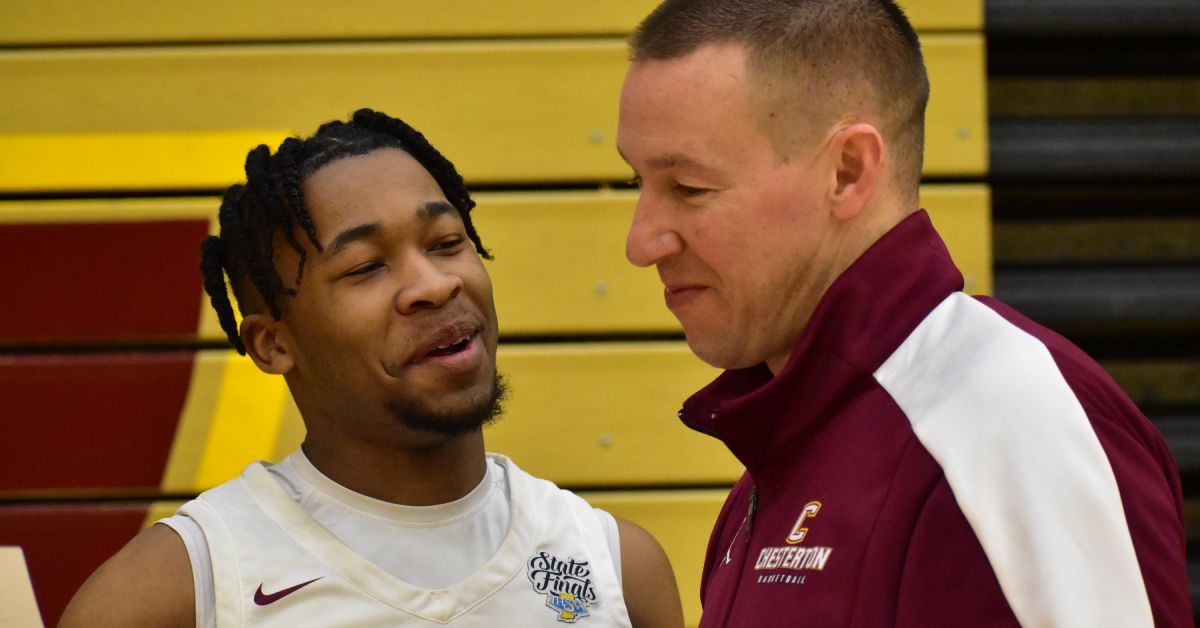 The Chesterton High School Trojans have journeyed through an undefeated record all the way to the state finals, which will be hosted at Gainbridge Fieldhouse this Saturday. The boys are on their way to the championship game after a nail biter at John Adams High School against Kokomo, where the Trojans won 42-40 at the final second in a gritty, yet thrilling battle. Now, they have a spot in the coveted state finals game against undefeated Indianapolis Cathedral. Led by seniors and All-DAC members Chris Mullen and Travis Grayson, this team has proven on the court why they deserve to be on the big stage.

Coach Marc Urban dedicates all of the team’s success to that of their hard work and dedication.

“We have a really good and connected group of kids that work really hard and it’s fun to see them have success collectively,” Urban said.

“You just try to put them in a position where he could just use his play instinctually.  He scores when he needs to; he passes when he needs to; I think that’s what’s been kind of nice is he’s a very smart kid so you can allow him to do those types of things,” Urban said.

The Trojans have been great both on offense and defense and Urban gives the credit to his lead blocker.

“He has the skill level of Justin with his 6’11” wingspan and ability to block and rebound shots,” Urban said.

Players Chris Mullen, Owen Guest, Tyler Parrish, and Travis Grayson all were described as pressure makers who create the ability to score off playing defense.

While the atmosphere will be slightly different than what the Trojans are used to, it doesn't deter from the fact that the ball remains the main focus of the upcoming game.

“They’ve played in front of big crowds, but it’s going to be a little different playing from an NBA arena shooting perspective. Once that ball goes up, we just have to make sure that we keep it in between the lines,” Urban said.

“A great deal of the success is to be a well-oiled machine who is being together a lot of the time. Travis Grayson’s inside scoring has been a key factor to the team’s success. It’s fun to get up and down and get those tough points even being a shorter guy," Vrahoretis said.

The Trojans have not only complimented one another on and off the court all season, but they’ve also accepted quite the challenge this weekend.

“I look forward to the competition, going up against the top guys in the state.  They’re from the south and we're from the north and we really don’t get much credit,” Grayson said.

Senior Chris Mullen has taken his leadership from the gridiron to the courts and has had quite the impact on his team.

Mullen recognizes the true power in teamwork and the difference it can make between winning games and losing games.

“With Travis on my side, it’s great. He’s a great player and leader. It’s definitely easier with a guy like Travis next to you,” Mullen said.

These boys are ready to climb that ladder and cut down those nets!

The IHSAA final state game will be held at Gainbridge Fieldhouse, home of the Indianapolis Pacers, this Saturday, March, 26 at 8:15 p.m. EST.  Let’s wish the Trojans the best of luck and to bring home a state championship to the Region!