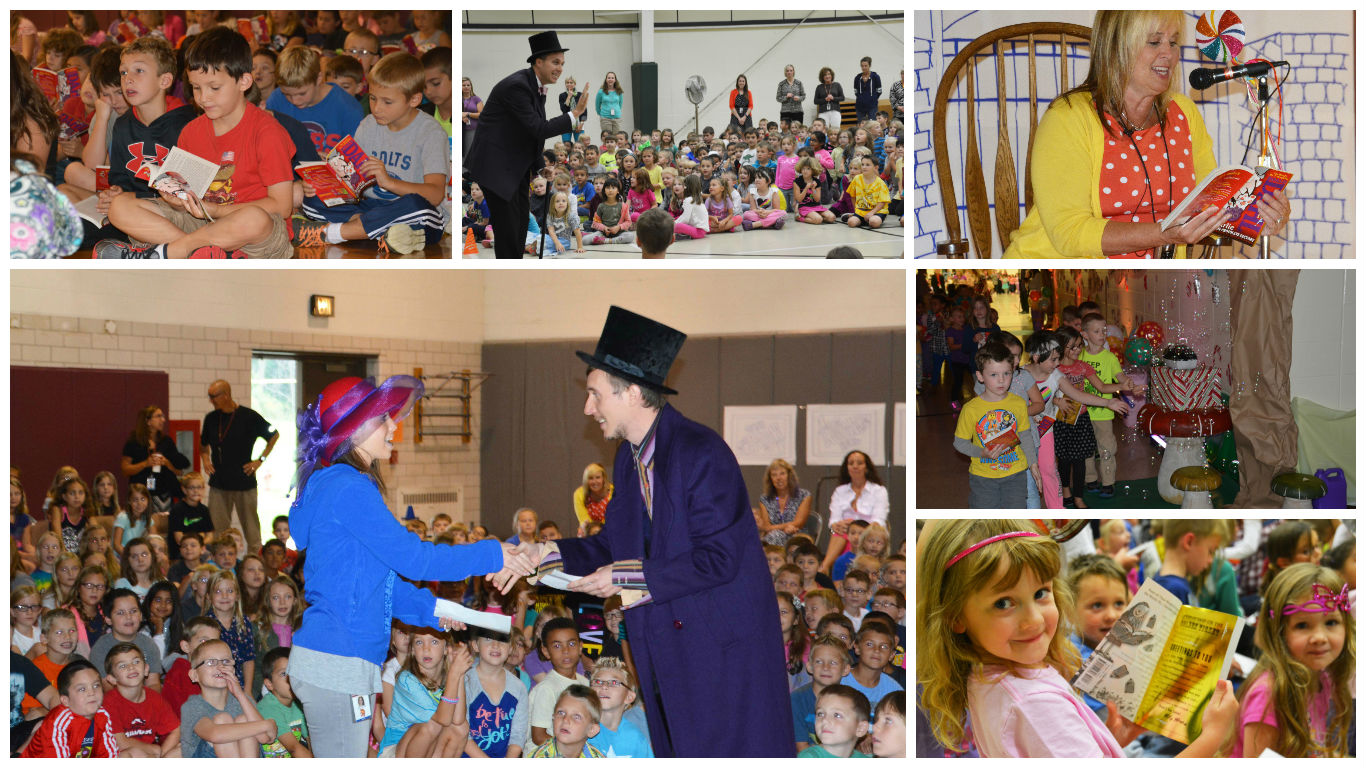 Bailly and Liberty Elementary Schools in Chesterton are sharing the book, Charlie and the Chocolate Factory, as their One School, One Book selection this year.

The two schools banded this year in an attempt to build a larger, unified community of readers connected through literacy.

This month each of the schools hosted a special kick-off celebration assembly introducing the program and the book. The title of the book was kept a surprise until it was finally shared at each event.

Bailly Elementary’s celebration unlocked the gates of ‘A World of Pure Imagination. Kevin Zeck, principal at Bailly Elementary, dressed as Willy Wonka, surprised his students with their books each wrapped as Wonka Bar and each with a golden ticket inside the front cover. He then unlocked the gates and invited them into a specially decorated hallway full of color, decorations, music and magic; complete with bubbles and balloons.

Liberty Elementary’s celebration began the week before the book reveal when things started turning gold at the school. The foyer at LES was mysteriously turned into a candy factory complete with large lollipops and flying pieces of candy. Windows and bulletin boards were covered with gold paper resembling giant golden tickets. Green slips turned into golden tickets for students' caught making good choices.' In addition, the morning announcements included clues to the title of the book, but it wasn't until the school-wide assembly where each classroom received a golden-wrapped boxed filled with copies of the book--one for each student and adult at school.

Students watched a video, created by Teacher Colin May that included several teachers and staff members from Liberty Elementary School playing a part in the unveiling of the book. After a surprise visit from Willie Wonka and a cast of characters from the book, students then listened as Principal Christy Jarka read the first chapter in the candy factory-designed gym during the assembly.

These special projects at each of the schools involve everyone in the school and everyone in the student’s family. Every family receives a copy of the same book and is asked to read it at home for about a month, generally, a chapter or 15 minutes per night. Parents are asked personally by the principals’ to make the time to participate in this special activity.

“Reading aloud at home is valuable because it better prepares a child to be an effective reader,” said Zeck. “But it is also a fun, worthwhile family activity. Through the One School, One Book program, we aim to build a community of readers at our schools. Everyone - students, parents, teachers, bus drivers, even administrative staff - will be participating, and we can all reap the many benefits.”

“When a whole school reads a book, there’s a lot to talk about.” With your help, we can build a Community of Readers at our schools.