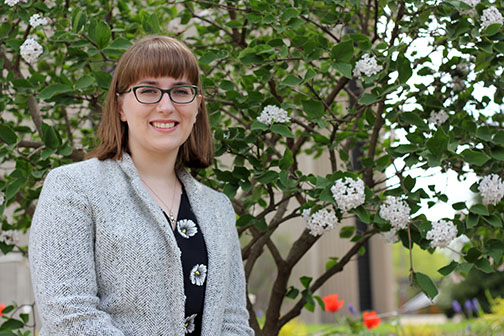 Kelley Feeman, 23, of Valparaiso, graduates this May with a bachelor’s degree in English and a minor in Performing Arts.

A Highland High School graduate, Feeman actively sought and took advantage of every opportunity she could at IU Northwest to make her dreams a reality.

Both Feeman and her mother, Cathy, a Class of 2015 fine arts alumna and her daughter’s one-time classmate, enrolled at IU Northwest for its affordability and incredible learning opportunities.

“Kelley’s story is a testament to life being what you make of it,” said Cathy Feeman. She points to such opportunities as a life-changing semester studying Irish Theatre at University of Kent in Canterbury, England; a position as a consultant in the Writing Center; and a lead role in editing and organizing events for Spirits, IU Northwest's literary and arts journal, as key to enhancing her experience at IU Northwest.

Here, Feeman found a thriving theater community where she belonged. Highly active in the Department of Performing Arts and Theatre Northwest, she was an actor in The Miser and took a leadership role with props and stage construction, painting scenes for Dracula, Circle Mirror Transformation, and Hedda Gabler.

She also created an intern position for last year's spring production, Love and Information, which allowed her to work alongside a Chicago-based dramaturg, a professional who is instrumental in steering the direction of theatrical productions. She also served as an assistant dramaturg for Failure: A Love Story. After graduation, Feeman will attend Miami University of Ohio on a full scholarship where she will pursue a master’s degree in dramaturgy.

Excited for her student’s future, Kathy Arfken, associate professor of design and technical theatre, said that Feeman has “consistently raised the level of discourse and inquiry” in all her classes and is “on her way to becoming an excellent theatre scholar.”

Feeman’s accomplishments have earned her numerous awards and commendations, including a student research grant for dramaturgy research and the Allen Austin English Award from IU Northwest's English Department, awarded each year to an outstanding graduating English major.

About the Class of 2017
Indiana University Northwest will confer 643 degrees at the 51st Annual Commencement ceremonies on May 11, 2017. The Class of 2017 will collectively receive 64 associate’s degrees, 532 bachelor’s degrees and 47 master’s degrees. Sixty-nine percent of this year’s graduating class are female and nearly 25 percent are over the age of 30. The most numerous degree to be granted is the Bachelor of Arts in Psychology followed by the Bachelor of Science in Nursing. The oldest and youngest graduating students are 64 and 20 years of age, respectively.