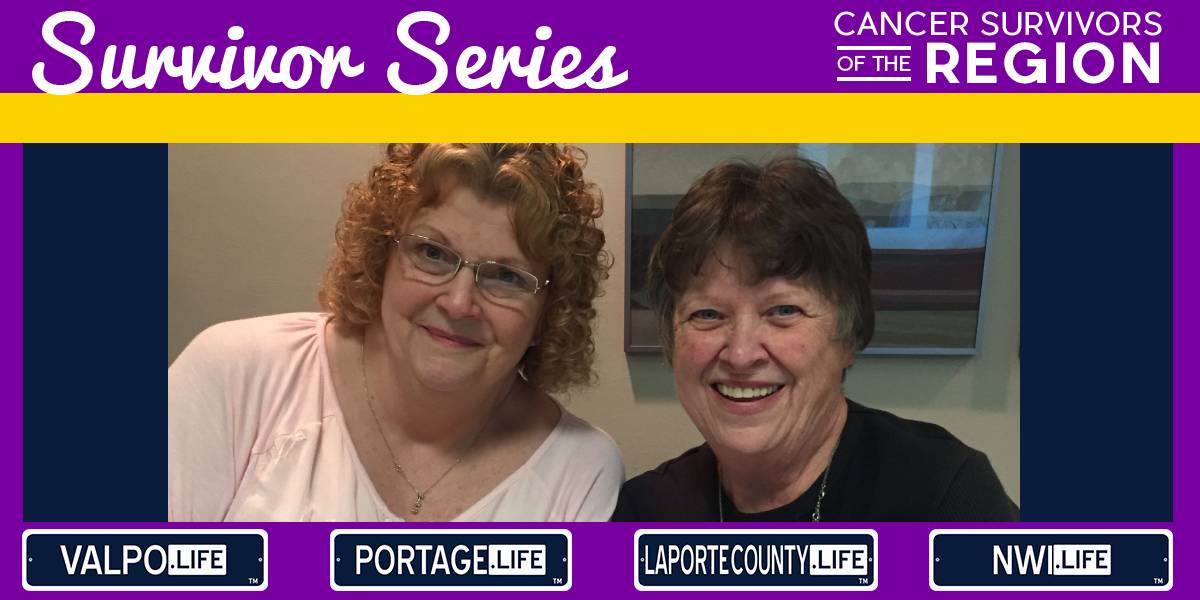 You would think that being a nurse would give you the upper hand when you learn you have cancer. Perhaps, in terms of the knowledge base, but not in terms of the fear factor. Just ask Shirley Edwards.

“I found a lump in my breast and scheduled a mammogram. I went to the appointment by myself, and immediately after the mammogram they told me they wanted to do a needle biopsy, so I knew something was up,” Edwards said. “That same day, I learned that they were 99 percent sure I had breast cancer. I went into the car and just broke down.”

“It was scary. I knew immediately what I could be up against. I had a lumpectomy done and the first time they couldn’t get clean margins. So they went in again to take more out. I still felt like I wanted a second opinion, so I went to Northwestern and they discovered two papillomas under my breast. They said sometimes those can become malignant if left alone, so I opted for a mastectomy and had my left breast removed,” Edwards said.

Even with subsequent chemotherapy treatments, Edwards said her treatment was relatively uneventful, save the time she overindulged on Fannie May candy and got sick.

“It wasn’t a horrible treatment and I did relatively well.”

Today, Edwards is cancer-free, and despite the difficult roads she’s traveled in life, she feels grateful for the love of family and friends.

“My daughters have just been wonderful,” she said. “At the time, my mother was in her late 80s and living with us. It was a lot to deal with, but everyone sort of played a role and I had a lot of help.

By her sixth chemotherapy treatment, Edwards began to experience what is known as the cumulative effect – when the chemotherapy builds up in the system and causes undesirable side effects.

“All of a sudden I couldn’t walk,” she said. “I ended up calling a good friend in Griffith for help. She came over and called my doctor and learned that this was a common side effect. So it put me at ease.”

Edwards was born in Ohio but grew up in West Virginia. When she was 13, her family moved to Indiana. She lived in Ross Township and graduated from Calumet High School in Gary. She and her husband lived in Schererville for 40 years before moving to Wanatah. Edwards’ husband passed away in 2018, and she now resides in Valparaiso.

“The years passed, and my life has not been easy. But there have been some good things in my life and I’m always very thankful when a survival anniversary passes. It’s been 15 years – that’s a long time. I’m 76 now, but if anything happened now, it would be OK, because I have had the opportunity to live past my diagnosis, and I know of a lot of people younger than me who have not.”

Edwards said prayer has helped her stay positive over the years, but she also recommends those who are newly diagnosed form a list right away of the people who can help them. And she encourages survivors to be there for others.

“I was always wanting that guarantee that everything would be OK, but you can’t really get that, so you need to have people in your life to support you. Nights were bad for me,” she said. “I kind of had a list in my desk somewhere about things you can do to be available to help people, and I use that. Talk to someone. Listen to them. Be positive. It’s very important.”

Edwards sheepishly agreed that sometimes nurses are the worst at taking care of themselves because they spend a lifetime taking care of others. It was true for her as well, but she also acknowledged her own stubbornness.

Edwards had a falling out with her healthcare provider who didn’t listen well, so she put off her own appointments for years before she found her lump.

“I could have kicked myself because I knew that I should have been getting my mammograms, but I was just stubborn. I had to get over it, though, and forgive myself because there were too many other things to do in life,” she said.

“I had been taking care of someone since I was 10 years old. I started babysitting at age 10, and then there was nursing, children, my mom, and my husband who died last December. That’s probably why those who are inclined to be nurses miss caring for themselves. You know you have to, but for whatever reason, you just don’t. I just happened to be one of the lucky ones.”

Edwards loved her nursing career, which began in 1964 caring for high-risk newborns and ended caring for children in an intermediate step-down unit. She never faltered and is amazed at how far care has progressed with technology.

“I worked in a premature nursery at Methodist Hospital and they didn’t get their NICU until 1988. When I first started working, nurses didn’t even start IVs – only doctors did that. Florence Nightingale was still working then,” she recalled, referring to the famed founder of modern nursing.

Today, Edwards enjoys spending time with her daughter and her granddaughter, who she said is 10 going on 30.

“I also go to breakfast with a group in Hanna. You never know who’s going to show up for breakfast. I enjoy that socialization a lot. I’m just so thankful to be alive and be able to walk around and have no issues with my bones or my back,” she said.

Her two pieces of advice for others: be there to wrap your arms around someone who may need it while going through treatment and get your annual screening mammograms.