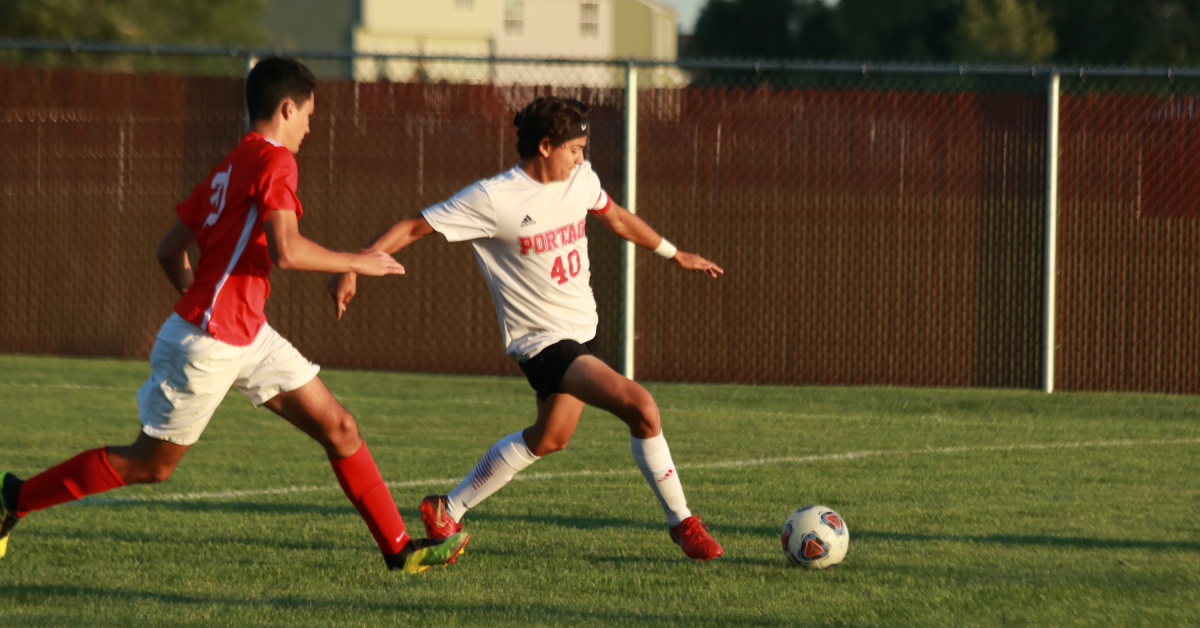 The Crown Point Bulldogs and Portage Indians battled it out on Crown Point’s soccer field Wednesday night. It was a hard-fought battle between both teams. Ultimately, the Bulldogs ended up on top with a final score of 2-0.

Both teams had stellar defense and phenomenal goalies. Scoring for the Bulldogs was Nikola Josifoski in the first half and Hayden Eaton in the second half.

The game was a DAC rival game, which made winning the conference game crucial for both schools. Conference games prove who the team to beat is and Crown Point showed themselves to be tough competitors for this season.

The Crown Point Bulldogs are coached by Michael Bazin. He had a game plan coming in, and believes his team followed that plan. He knew before the game that Crown Point had to set a precedent and come out hard to win. His team did just that.

“We were concerned with sending a message to not only this team, but other teams in the area--that we are a team to reckon with. I told the guys they had to come out strong and put the ball in the net today,” Bazin said. “We did have a lot of opportunities and we have to finish those plays in future games.”

The Bulldogs were sound defensively and offensively. Gavin Stagg stuck out offensively in the game, having good touches and multiple shots on goals.

Kristian Simakowksi knows what it’s like to play on both teams. Last year, he was a member of the Portage team, but transferred to Crown Point this year and competed against his former soccer family. Coach Bazin knew it would be a good one.

“I talked to him before the game to check if he would be okay playing against them. I knew he wanted to score a goal, but Portage played good defensively in keeping him scoreless,” Bazin said.

The Portage team played a tough game and has made progress throughout the year on both sides of the ball. Goalie, Harris Ables performed his best, and player Miguel Verduzco conquered defense. For first year coach Dave Kurtz, the little gains are important.

“Coming into the game and being disciplined about our defensive state was important and the guys are getting better about that. We have progressed from the first game to now, and I know we’re just going to keep growing and figure out how to play tactically,” Kurtz said.

“Portage has a young team who lost 13 seniors last year. We have guys coming off the bench contending for Varsity spots and it’s nice to build forward. Right now, it is about getting small victories on the field,” he continued.

The Crown Point Bulldogs play next on Saturday against Hammond Morton, one of the best teams in the Region and state. The game is at home and they plan to continue to prove they are a team to beat.

Portage will play next on Saturday as well, against Griffith at home.

Be sure to check out Region soccer and look out for additional photos and articles!