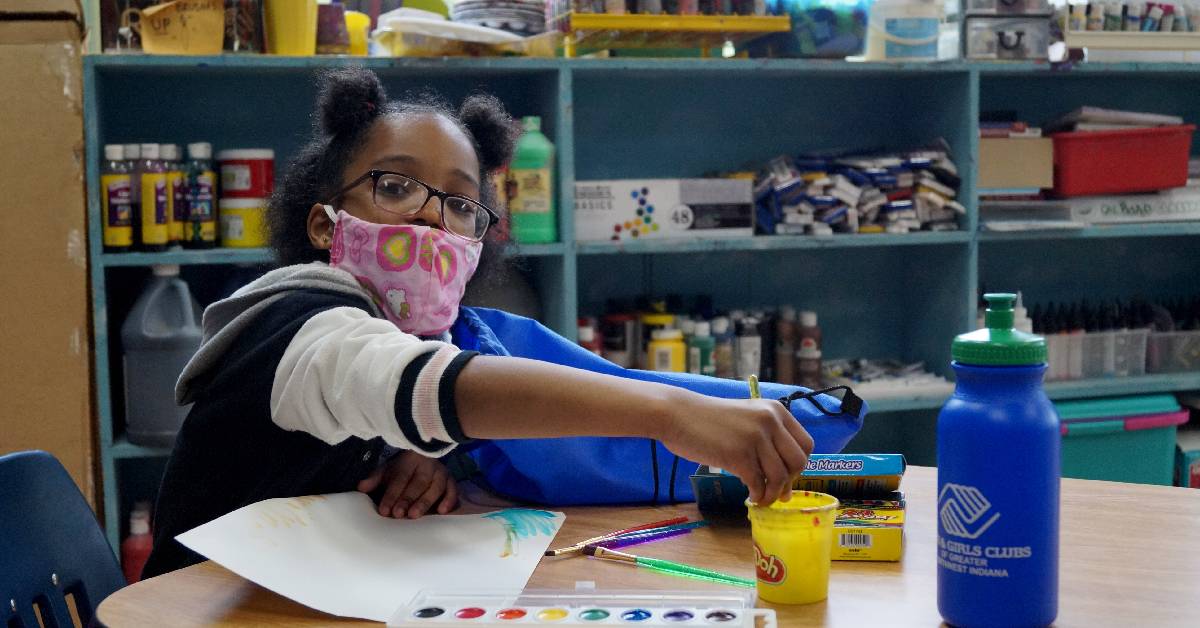 Photo caption: Valparaiso Boys & Girls Club member Aarilyn Berry wears a facemask while painting. All staff members are required to wear masks throughout the day, while youth are encouraged but not required to do so.

After Boys & Girls Clubs of Greater Northwest Indiana made the decision to close its doors on March 13 in response to the COVID-19 pandemic, Clubs across Porter and Lake counties sat empty. Like nonprofits across the country, the organization was faced with the challenge of maintaining viability and continuing to serve the community in ways that stayed true to its mission. For weeks, leadership debated the crucial next steps that would define the organization’s response to the pandemic.

“Some of our families told us they were struggling with e-learning, some were having a hard time easing their children’s anxieties, and many of the parents we spoke with were struggling to provide hot dinners for their families,” Condon said.

Beginning in April, Boys & Girls Clubs of Greater Northwest Indiana began offering e-learning assistance, where Club kids could schedule video conferences with and receive tutoring from staff members, and a parent hotline, which allowed Club parents to speak with the organization’s Social Services Director. In terms of scope, however, the greatest impact came from its Family Dinners program. Through April and May, Boys & Girls Clubs of Greater Northwest Indiana distributed over 4,000 take-and-bake dinners to Club members, in part with funding from Legacy Foundation, Crown Point Community Foundation, United Way of Porter County, and Porter County Community Foundation.

Staff who were not remotely tutoring Club members or distributing dinners were busy behind the scenes, deep cleaning and sanitizing Clubs. Meanwhile, the organization’s leadership was looking forward. Knowing that the 2,200 Club members the organization serves daily had been cooped up for over two months, away from their friends and unable to socialize, president and CEO Ryan Smiley tasked his executive team with developing a plan to safely reopen and provide Boys & Girls Clubs youth with the Best Summer Ever.

Smiley said that while it was important for Boys & Girls Clubs of Greater Northwest Indiana to be able to help its communities over the past few months, the organization was eager to start serving youth directly again when it was safe to do so.

“We are fortunate to have been in a position to help our Club families, but we are a people-based organization,” Smiley said. “The greatest impact we have is by serving youth in Northwest Indiana and providing them with high quality programming that develops academic and social-emotional skills. When Governor Holcomb eased the restrictions for gathering and it was safe for us to open back up, we wanted to be ready to go.”

On June 1, after eleven weeks of closure, five of the organization’s Clubs were ready. With a number of safety restrictions in place, Boys & Girls Clubs in Portage, Chesterton, Valparaiso, South Haven, and Cedar Lake re-opened their doors and began serving region kids again. On Monday, three more clubs re-open, marking a significant moment as all eight of the organization’s standalone locations will again be serving youth face-to-face. Youth in Gary and East Chicago will be able to attend their home Clubs, while members in Hammond will attend Club at Lafayette Elementary, where Hammond Boys & Girls Club is temporarily housed while its facility is undergoing renovation.

Smiley is hopeful that Clubs re-opening will provide region youth with some much-needed optimism.

“During the time our Clubs were closed, the work never stopped and our commitment to youth never wavered,” he said. “We knew that eventually we would re-open, and that when we did, our focus had to be on giving kids the Best Summer Ever.”