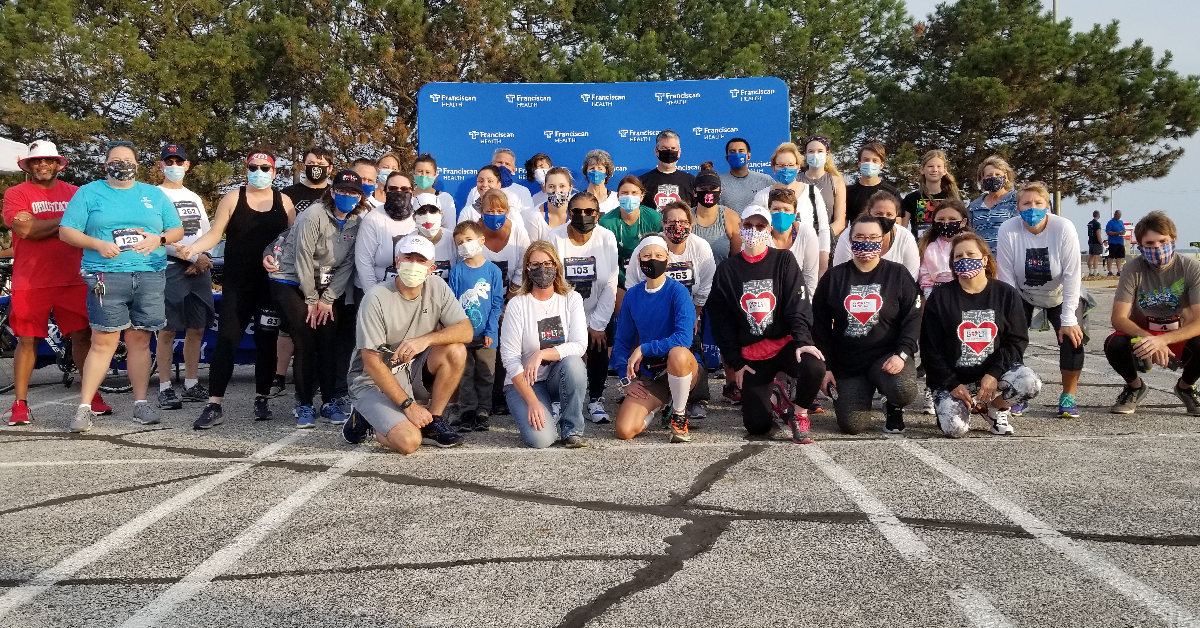 Runners from around the region once again converged on the sandy shores of Michigan City’s Washington Park Beach to join together for a cause in the second annual Bolt for the Heart 5K Family Run /Walk/Half Marathon. Bolt for the Heart is a 501(c)(3) not-for-profit organization that raises money through generous sponsors like Franciscan Health, donations, and family 5Ks/half marathons to buy AEDs for first responders. Since its establishment in 2010, Bolt has donated more than 2,000 AEDs.

Heart disease has long been identified as the leading cause of death in the United States. Roughly 655,000 Americans die from it each year - that’s a rate of approximately one person every 36 seconds. Early access to care and treatment is key to reducing those numbers and improving a person’s survivability. That means that CPR and - especially - early access to an automated external defibrillator (AED) are key to saving lives.

Helping to organize the event was Julie West, founder of the Play for Jake Foundation, a non-profit organization founded in 2013, following the tragic and unexpected death of Julie’s son during football practice on Kiwanis Field in La Porte.

“Jake died from sudden cardiac arrest during a practice game,” said West. “As a family, we didn’t want anyone else to have to go through that, so we decided to create the Play for Jake Foundation. We visit schools, offering EKGs and ECGs to all students to try to identify potential heart problems before they arise.”

The Play for Jake Foundation helped to support Bolt for the Heart, through donations of water for the runners, and also donated an AED to the cause.

“I have to thank our community for all the support. Because of everyone who has supported our foundation, we were able to help by supplying that AED for our first responders here in La Porte county,” said West. “This is near and dear to my heart and I feel very blessed to be able to be here today.”

“The goal here today is to be able to raise money to be able to equip each patrol vehicle here in La Porte county with an AED,” said La Porte County Sheriff John T. Boyd. “Oftentimes, we are much closer to the scene of an emergency. We are often the very first on scene to such medical emergencies, so being able to have an AED can literally be a lifesaver, helping to stabilize a patient until EMS can arrive on scene to transport to a local hospital for further treatment.”

“We’re hoping that this event will not only allow us to purchase additional AEDs to equip more cars in our fleet, but also to help support the ongoing cost to replace batteries in existing units, as well as electrode pads and other items related to the AED program,” Sheriff Boyd said.

Natalie Poston of La Porte took second place in the 5k run, shaving off a full five minutes from her time in last year’s event.

“I’m really happy to be able to be here, helping to raise money for Bolf for the Heart,” said Poston. “It’s a really great cause.”

Dean Mazzoni, President and CEO of Franciscan Health of Michigan City was among those taking to the streets to run for the cause.

“This is a great opportunity for us, not only to show our support for our local police officers and police officers, but also to raise the funds needed to be able to put AEDs in every patrol car here in La Porte county,” said Mazzoni. “Police officers are often the first on scene. When they have an AED which they can use to help revive those patients, those patients can be transported to the hospital where they can get the care they need. We’re really honored to be able to be a part of this event.”

Blair Milo, former mayor of La Porte and current Secretary for Career Connections and Talent for the state of Indiana was on hand to run the half marathon and support the cause.

“It’s such a thrill to be here today,” said Milo. “The Bolt for the Heart Foundation and the Play for Jake Foundation each are doing incredible things here, so to be able to come out here today to help support this cause, to be able to come out and safely be part of this running community was just amazing. We had a great turnout and you couldn’t ask for better weather.”

Milo had high regard for the event’s organizers.

“They did such a great job of keeping everyone safe and masked up prior to the race.”

Sheriff Boyd was overwhelmed with the community response to the event.

“We’re incredibly grateful to the public. Not only those who are here today, participating in the marathon, but also to the volunteers who have come out here today to help make this happen,” Boyd said.

“When we put out a call to the public to let them know that we’ve got a program out there to help law enforcement, the public responds and we are very grateful for that.”

For more information about Bolt for the Heart, including donations and sponsorship opportunities, visit them online at www.boltfortheheart.com