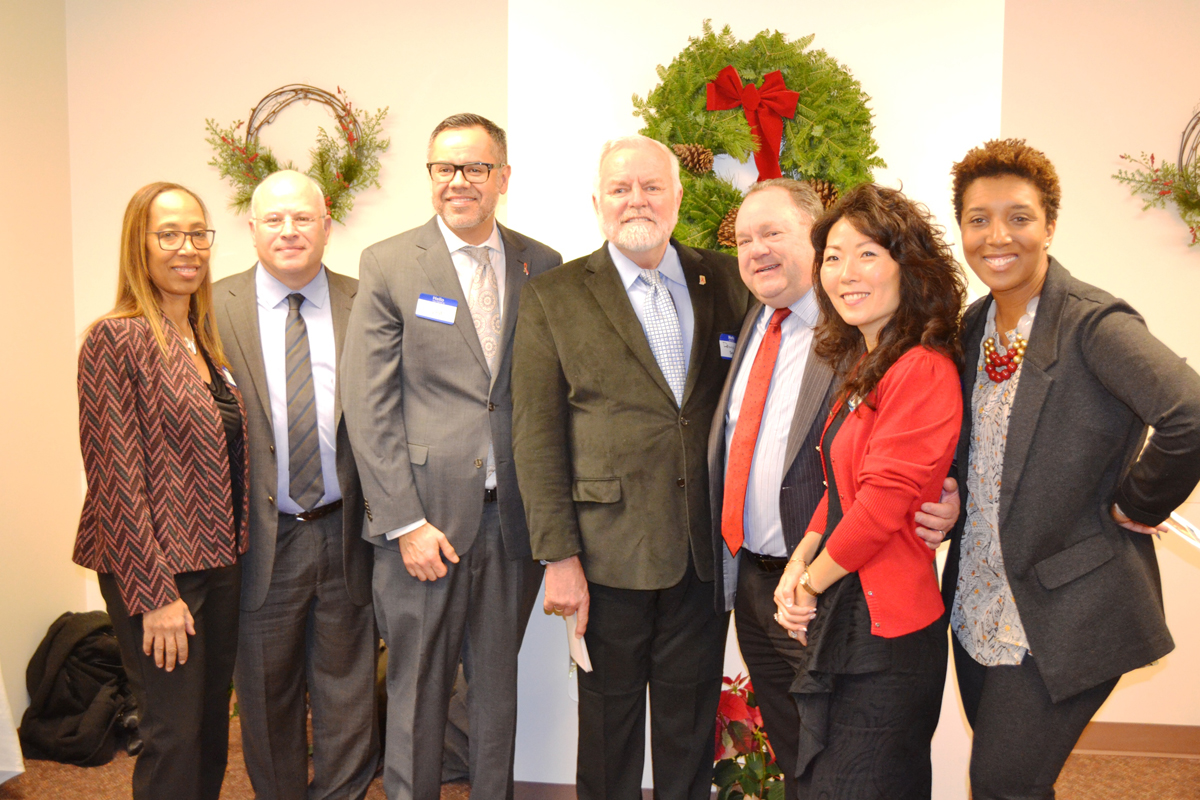 State Department of Health officials from both Indiana and Illinois were in attendance on Thursday, Dec. 6, for a blessing and open house for a first-of-its-kind clinic in the state that aims to fill an urgent need to test and treat patients for hepatitis C and HIV.

The Multi-Specialty Hepatitis C and HIV Clinic is located on the first floor of Franciscan Health Hammond at 5454 Hohman Ave., and will serve both the Northwest Indiana and South Suburban Chicago communities. In the beginning, providers at the clinic will offer services from 8 a.m. to noon on Wednesdays. There will also be days available for free hepatitis C screenings with linkage to care support services.

Dennis Stover, director of HIV, STD and viral hepatitis for the Indiana Department of Health said the clinic is a first for Indiana, adding, “I think it’s a model for the country.”

“We know the HIV arena organized very early and it had a lot of community behind it. The hepatitis C community does not have that, so marrying up HIV and hepatitis C is very important to not have to relearn those lessons that we learned in the ‘80s. The importance is that they go hand in hand. A lot of folks that become HIV positive are also at risk of hepatitis C,” Stover said.

Jolietta Holliman, director of the Hepatitis C Program, Franciscan Health Foundation, said automated calls have started going out to the Franciscan Alliance network, letting those born between 1945 and 1965 know that they should be screened for hepatitis C. Historically, the greatest burden of the hepatitis C virus has been among baby boomers. The Centers for Disease Control and Prevention recommends they be screened at least once in their lifetime apart from other risk factors.

“The response has been incredible, Holliman said. “We’ve had engagement of over 40 percent, and almost 30 percent saying ‘yes, I’d like to come and get screened.’” 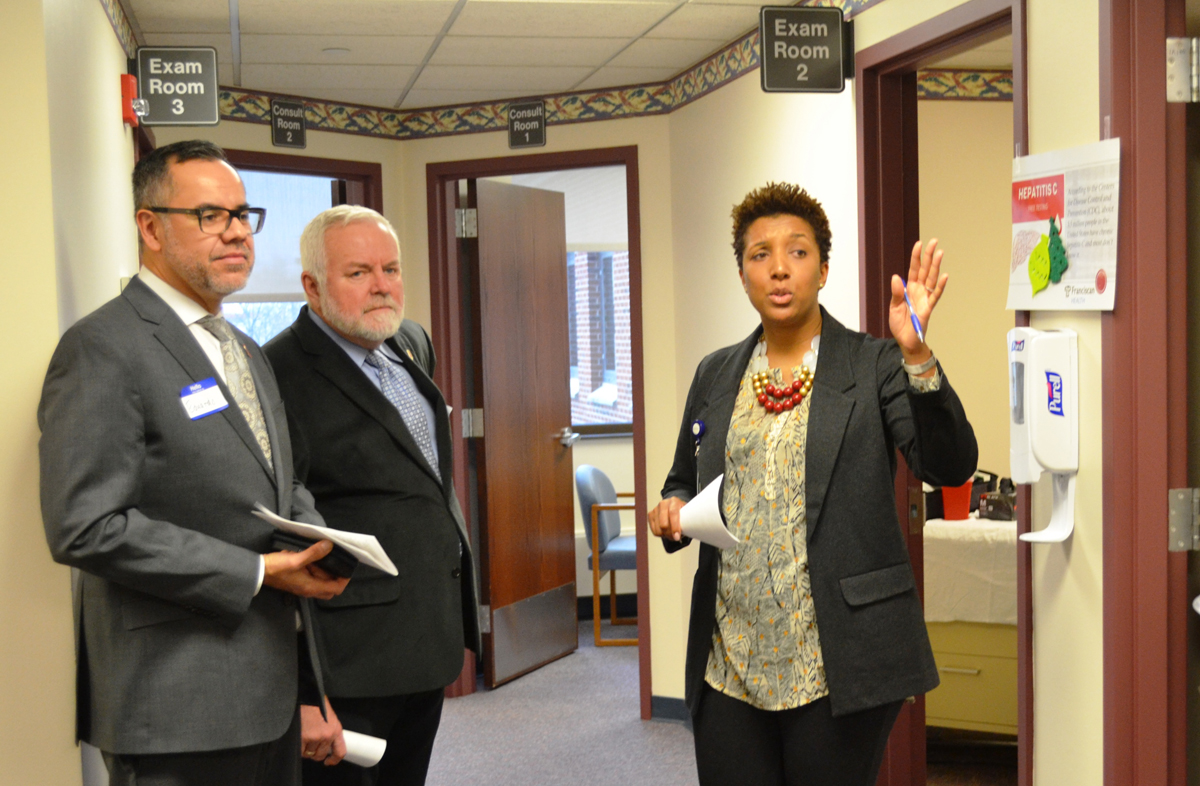 The screening and linkage to care portions of this effort are supported by the FOCUS (Frontlines of Communities in the United States) program of Gilead Sciences. Since the initial FOCUS grant award in July 2016, the program has screened more than 20,000

Franciscan patients and community members for hepatitis C in South Suburban Chicago and Northern Indiana, an increase of 145 percent. Through those enhanced screening efforts, 490 people living with chronic hepatitis C have been identified. Still, providing patients with additional support and linking them to care has been challenging until now.

“We now have curative hepatitis C medications, and we know that the rates of coinfection of hepatitis C among those that are also living with HIV and AIDS is significant and it’s a huge public health priority for Illinois and our partners across the state in Indiana. So whatever we can do to align resources to synergize seamless entry to care we champion. We would love to see this kind of model flourish and replicate throughout Illinois and Indiana,” said Eduardo Alvarado, chief of the HIV/AIDS section for the Illinois Department of Public Health.

A key innovation in the clinic is a partnership with the Pharmacotherapy Clinic to offer support in prescribing, preauthorization, medication counseling and patient assistance. While there are drugs that can cure hepatitis C, these drugs are often cost-prohibitive for many to purchase. The clinic will expand the patient assistance and charity program, so vulnerable and uninsured patients can receive life-saving drugs. The clinic is also working with other community agencies, such as the Aliveness Project, to secure additional resources for those who need them. Franciscan Health Hammond is a 340B-covered entity, taking part in the federal medication discount program to increase access to healthcare in the community.

Dr. Claude Foreit, vice president of Franciscan Physician Network said the clinic is the culmination of great work on the part of Holliman and Sun Lee-Such, Franciscan Health administrative director of pharmacy services for Northern Indiana and South Suburban Chicago Division. “Hopefully it will be a great resource for Hammond, Northwest Indiana and the Calumet City Region,” he said.

Patrick Maloney, president and CEO of Franciscan Health Hammond, Munster and Dyer, also praised the leadership of Holliman and Lee-Such. “When you have a team like this, I stay out of the way and give them the support they need,” he said.

Lee-Such said, “This will be the first of its kind, a hepatitis C, HIV comprehensive center, so we can provide the best care for our patients. It fulfills our mission because it’s filling a gap in the community with so many dedicated people coming together to provide that service.”

Anyone interested in scheduling a screening or seeking support services or treatment can call the Multi-Specialty Hepatitis C and HIV Clinic at (219) 852-1563.