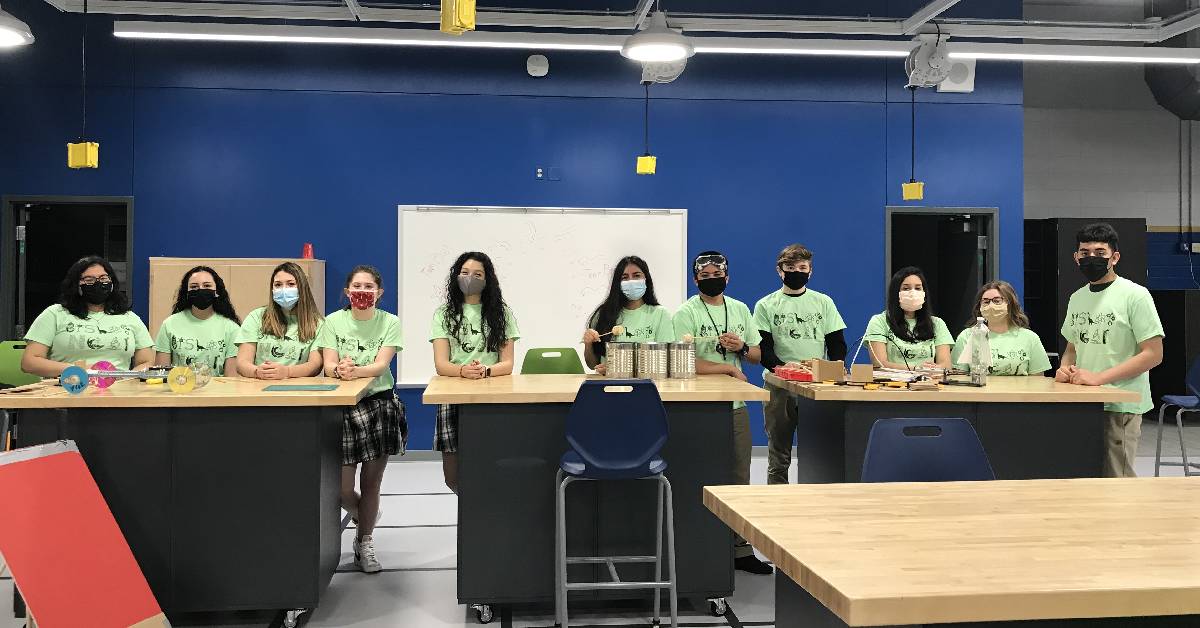 The Bishop Noll Science Olympiad Team overcame several obstacles to work toward its second straight bid to state. Three teams broke into the top 15 in the state, which took place virtually. Junior Jacqueline Garcia and sophomore Rebecca Carlos of the Wright Stuff team placed 16th in the state, just one spot away from the top 15. Abbie Kawalec in Disease Detective placed 15th; Mariana Gonzalez and Jesus Olages placed 13th in Ornithology, and Captain Abbie Kawalec cracked the top 10 in Experimental Design.

The team qualified for State last year, but the competition was cancelled due to the pandemic. This year, members were ready to take on another year of Science Olympiad virtually. They practiced after school and during lunch in the STREAM Lab to prepare for individual events. On any given day, the lab had students studying together, while other teammates prepared notecards and others worked on making musical instruments and bottle rockets.

Sophomore Victoria Piskol has been on the team for the past three years and competed in Designer Genes, Water Quality, GeoLogic Mapping and Dynamic Planet. She enjoys all the different aspects of science whether it be biological or environmental.

“It felt great to compete in the state competition,” she said. “Knowing the hard work that everyone put into the events and seeing success was amazing …  everyone did great and I know we will have continued success next season.”

Sophomore team member Rebecca Carlos competed in Write Stuff, Write It Do It, Anatomy and Physiology and helped her teammates with Gravity Vehicle. She joined Science Olympiad her freshman year because she likes how science makes her think outside the box and find different ways to solve a problem.

“I enjoy that we could choose which events we want to do and how welcoming and understanding everyone is.”

Junior Jacqueline García participated in Science Olympiad in 4th, 10th and 11th grade.  This year, she competed in Wright Stuff and Write It, Do It. For Wright Stuff, she built an airplane with partner Rebecca Carlos. It flew by attaching the propeller with a rubber band. They placed 16th in state.

“We did very well in this event. It felt amazing to be able to compete in state. It was a little different from last year, but it was still really fun.”

She loves Science Olympiad because it is fun and she learns so much from the group. She is also on the tennis team and cross country team. She is a member of NHS, Student Ambassadors, Drama Club, Art Club, Yearbook, Biology Club, Women’s Empowerment Club, Choir, Academic Super Bowl, Academic Spell bowl, Speech, Workshop Club and Chess Club. She is also a student athletic trainer, track manager and Campus Ministry Intern.