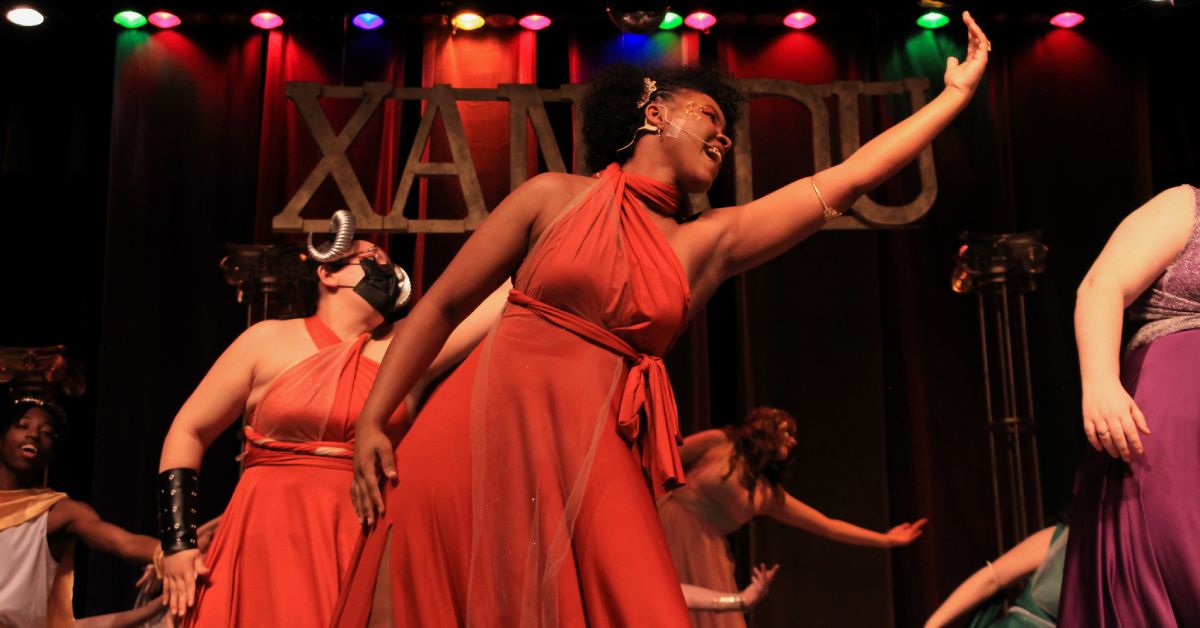 The opening night of Bishop Noll High School’s production of Xanadu was on May 13, and the show will continue all weekend. Tickets are $8 for adults and $5 for students with a school ID. Stage manager Bianca Perez explained the unique twist this musical puts on the cult classic Xanadu.

“The show is a parody of the Olivia Newton-John movie Xanadu. It takes that movie and then puts a more comedic twist on it. There are disco parties, there are roller skates, and then you also have the Greek mythology spin to it with all the Muses,” Perez said.

This fun, creative, and colorful spin on the classic movie will not be forgotten by the students or the audience. As director Kayla Konkle was introducing the production, she spoke about how much of an impact she believes this show is going to leave on the students.

The time and effort that has been put into this production are unmatched. With little allowance in the school budget, student Ezra Vasquez explained, that everything is funded by fundraisers, show profits, or out-of-pocket by Konkle.

“Mrs. K loves drama. This is basically her whole life. She puts so much effort and time into this, and they've been working on the play since February. One of my friends is in it and it's a really fun play,” Vasquez said.

Sophomores Painalli Patino and Lacey Stanford are two of the actors that have dedicated so much of their free time to Xanadu. Both Patino and Stanford take on the role of sirens for this production, and they have been able to truly experience what it is like to be a part of a musical.

“My favorite part of being a part of drama club is being able to get away from reality by being a new character. Also, when it comes to musicals, the dancing aspect is really my thing,” Patino said.

The dancing in this musical is something Patino and Stanford both enjoy. Along with that, the cast and crew of the show are creating lifelong connections and memories while preparing, and performing this production.

“I love dancing and being able to dance and be free, so this always brings me happiness. A lot of my close friends are in drama club and I was able to get really close with them throughout drama club,” Stanford said.

The music behind musicals is one of the key ingredients that go into putting on a good show. Band director Rocco Carioto explained the value of having a live pit band due to the nature of the real-world preparation required.

“When I started here, I wanted to give the kids a life experience. If they were going to play in any actual Broadway musical, what would they have to go through? Rehearsal time, preparation, and so forth,” Carioto said. “We've always stressed having live music. It's not perfect, but they get a real taste of it because that's what we're all about.”

Carioto and Konkle understand the importance of the arts and try their hardest to allow their programs to work together when possible. The musical is a perfect example of this because the pit band and the cast members get to work together to create the music of the production.

“I play the coronet, which is like a mini trumpet. I got involved with the theater because I am in the drama club, and Mr. C and Mrs. K are very close.” Juliana Barrera said. “Anything that the arts can do together, we try to get together any time we can. That is how we got the pit band organized.”

The work all of the students and staff put into the musical becomes worth it when they are able to finally put on the production for their friends, family, and community members. Bishop Noll High School’s production of Xanadu will leave you both laughing and dancing in your seat.

“I am here supporting my daughter, Catherine Selim. They've been working for months on this play, so I'm finally glad to see it come to life and see how they're doing it. She's a senior this year, so this is her last one,” audience member Beverly Seleb said. “She is keeping the play secretive, but I did hear that there's a lot of older adult humor. People who grew up in the 70s and 80s will get a lot of the jokes.”