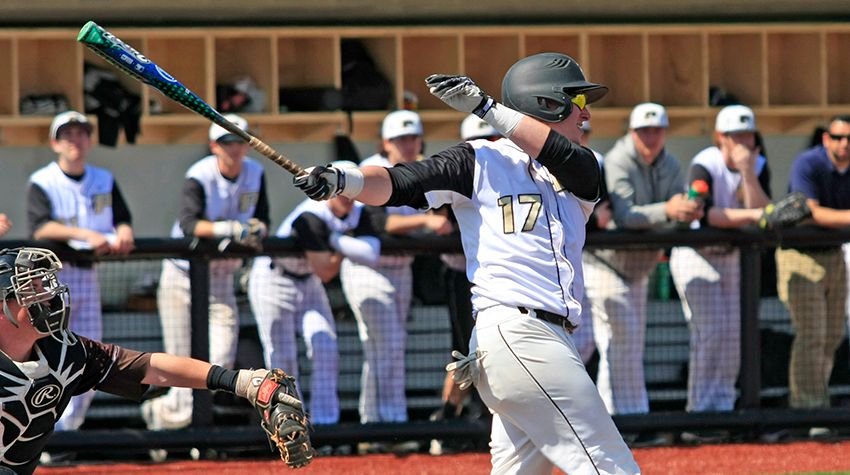 Anna Maria (0-8) opened the game with a two run inning in the top half of the first, but the Peregrines would answer on an RBI-single from Cody Dykema (Crown Point, Ind./Lake Central) followed by an RBI-double by Cody Moskovsky (St. John, Ind./Bishop Noll) to even the score at 2-2.

In the top of the fourth innings, the Amcats would regain the lead on an RBI single from Matthew Leahey.

Anna Maria's lead wouldn't last for long, after the Peregrines recorded four runs in the bottom of the fourth frame.

Andrew Atchison (Crown Point, Ind./Crown Point) and Dykema each recorded RBI hits to give the Black an Gold a 6-3 advantage heading in to the fifth.

Purdue Calumet would break open the scoreboard in the next four innings, starting with an RBI-triple from Crussen followed by a sac fly from Eric Sickles (Benicia, Calif./Benicia) to give the Peregrines an 8-3 lead at the bottom of the fifth.

Senior John Cristo (Munster, Ind./Munster) would add to the hit parade in the bottom of the sixth, connecting on his first home run of the season which gave Purdue Calumet a 9-3 lead.

Moskovsky and Cristo would record 2-RBI extra base hits in the seventh and eight innings to help lift the Peregrines past the Amcats 14-5.

The Black and Gold out-hit Anna Maria 17-10, thanks to nine extra base hits by the Peregrines offense.

Lefty hurler Josh Arnold (Lowell, Ind./Lowell) would pick up the win in relief for the Peregrines, pitching 3.1 innings and striking out two.

Junior Matt Sandoval (Highland, Ind./Bishop Noll) would enter the ninth inning to face four batters while striking out a pair.

Purdue Calumet returns to action on Saturday, Mar. 19 when they host CCAC foe Trinity Christian for a double header at Albert's Diamond Jewlers Field at Dowling Park. First pitch is scheduled for 12:00 p.m.

The 6-foot junior guard is majoring in Hospitality and Tourism Management with an emphasis in Fitness Management, and carries a 3.78 GPA.

This wasn’t the first academic honor Deno received, as she was one of 10 student-athletes from around the country to be named to the CoSIDA Academic All-America College Division Team back on Feb. 28.

Deno averaged 19.2 points per game for the Peregrines, which ranked third in the Chicagoland Collegiate Athletic Conference. She added 6.9 rebounds, 2.2 assists, 1.6 steals per game and was been lethal from 3-point range, where she shot 40.0 percent with 184 field goals made on the year. Deno added an 88.4 percent clip at the free-throw line (152-172) and shot 42.2 percent from the field in 30 starts on the season. A two-time CCAC Player of the Week selection in 2015-16, Deno joined the Peregrines' 1,000-point club back in November.

Deno (Otterbein, Ind./Benton Central) led the nationally-ranked Purdue Calumet women's basketball team to its fifth-straight 20-win season, as the Peregrines finished the season with a 22-9 overall record after falling to No. 12 Mount Marty (S.D.) in the First Round of the NAIA Division II National Championships Thursday, Mar. 10.

The award was Deno's first, as it is presented to student-athletes who must maintain a minimum grade point average of 3.5 on a 4.0 scale and must have achieved a junior academic status.

For the full list of award winners, see the NAIA’s full release here

The 6-foot-1 guard is majoring in Accounting and carries a 3.52 GPA.

Obinger started in 10 games during his junior campaign, and finished with a 30.9 percent shooting percentage from beyond the arc.

The award was Obinger’s first, as it is presented to student-athletes who must maintain a minimum grade point average of 3.5 on a 4.0 scale and must have achieved a junior academic status.

For the full list of award winners, see the NAIA’s full release here