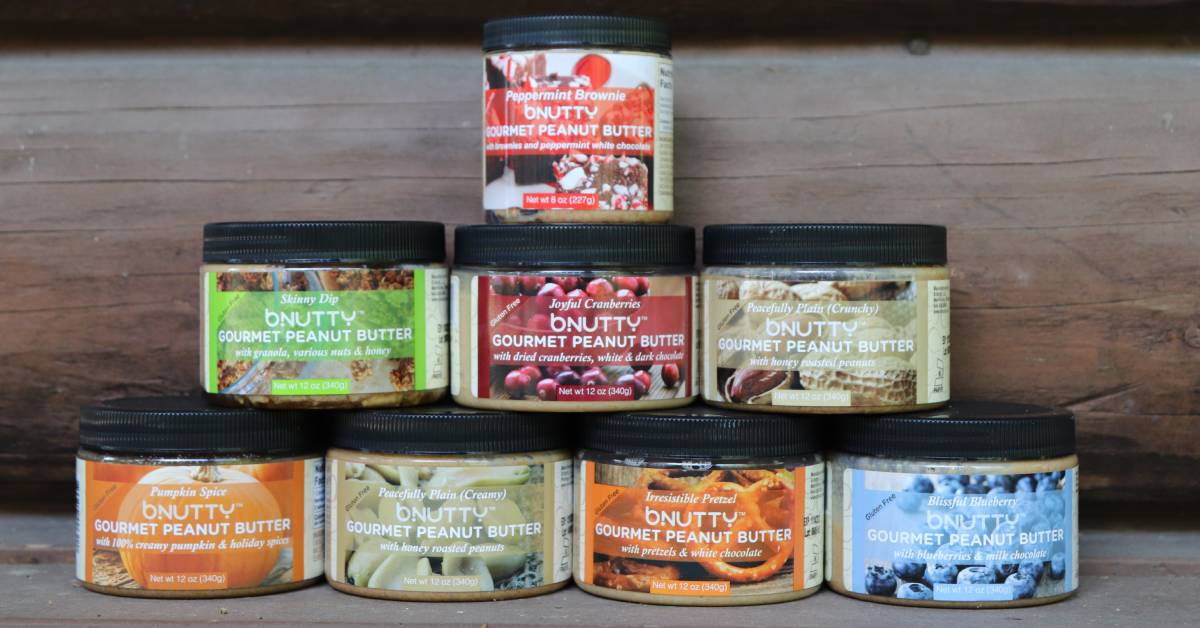 “Nothing over here at the ‘Nut House’ is ever completely smooth sailing,” said Carol Podolak as Joy Thompkins, her partner in crime and fellow co-owner of B Nutty finished her sentence, “We specialize in crunchy peanut butter for a reason.”

Back before B Nutty peanut butter came to be in 2014, Thompkins found herself making unique peanut butter in her kitchen as a nutritional snack for her boys and their traveling soccer club teammates.

“When you’re dealing with boys, they eat a lot and they eat often. Peanut butter is a good, nutritious snack that they can eat on the road or quickly in between games,” Thompkins said.

Acting and thinking as a former Girl Scout, Thompkins decided to begin selling her original peanut butter recipes as a fundraiser for her son’s traveling soccer team, the Indiana Elite FC. It wasn’t until later that her soon-to-be business partner, Carol Podolak, entered the picture.

“I was anti-peanut butter at first and had already planned out all of my boys’ fundraisers for the year. From popcorn to chocolate bars… it was all planned,” Podolak said.

Joy and the rest of the moms insisted she at least tried the peanut butter before she shut down the idea of selling it completely.

“I told her if she doesn’t like the peanut butter, we will never mention it again,” Thompkins said.

“I had one bite and it was truly the best thing I had ever tasted,” Podolak said. “I scratched the rest of my fundraising ideas that night.”

And from there, B Nutty traveled forward at what seemed like 100 miles per hour.

The group of soccer moms continued to produce peanut butter in Thompkins kitchen, later began renting a bigger kitchen space, soon moved into their own facility in Merrillville, and eventually found an even more spacious home in Portage, Ind., all within the course of five years.

“Our previous facility in Merrillville was about 2,000 square feet and we thought that would be more space than we’d ever need. We thought, ‘what would we ever even do with all of that extra space?’” Thompkins said.

The Nut House’s new home in Portage is a whopping 17,000 square feet, and still, each corner of the room serves a purpose. While finding the B Nutty’s new home was a long process, it was an enjoyable one at that.

It just so happened that working with Holladay Properties was a partnership perfectly suited. AJ Monroe, VP of Planning and Development at Holladay, was previously involved in the Indiana Elite FC and even spent an amount of time with the program as a coach.

“AJ and the team at Holladay really wanted to get to know us as a business. They even took the time to visit our old site and ask us questions about what we liked about the space, what we didn’t, and where we wanted to expand in order to find the perfect fit for our next location. They were dedicated to finding B Nutty a new property that really gave us what we wanted,” said Thompkins.

Thompkins noted that the extra steps taken by Holladay to get to know B Nutty was what truly secured their partnership. “We’re thankful for those early planning meetings because they ultimately led to a smooth transition as we made our move. Their continuous support showed that they truly cared about us finding the right spot,” Thompkins added.

Walking around the new B Nutty building, you will come across many returning soccer players that Thompkins and Podolak have mentored or are currently still mentoring today on Indiana Elite.

“A lot of the boys come back from college for the summer and are eager to help us out,” Podolak said.

But this helping hand comes full circle. Podolak, Thompkins, and another mentor previously founded the Scholars Academy within Indiana Elite, which is sponsored by B Nutty peanut butter. B Nutty donates part of its yearly profits in order to help fund SAT and ACT prep classes, college visits, tutoring, and more.

“Our club’s goal is to create not only great athletes, but great student-athletes,” Thompkins said. “We began to see kids within our soccer club getting offers to play in college, however, they couldn’t accept these offers because they weren’t academically eligible. We decided to develop a plan right then and there to help our kids in this area.”

In addition, Thompkins, Podolak and other mentors at the Scholar Academy also focus on skills that extend further than the classroom.

“We work on eye contact, having conversations, public speaking, and more. We want to teach them how to stand out in a crowded room and build their character,” Podolak said.

When explaining their passion for helping others, both stressed why working with these kids is important to them.

“Both Joy and I think it’s important to leave the community better than we found it. We’ve been blessed with so much help along the way as we grew this business, that giving back to these kids makes perfect sense,” Podolak said.

When describing their adventure of becoming business owners and operators, both Thompkins and Podolak explain it as one thing: a journey.

And a journey it was. Neither Podolak nor Thompkins had a background in business, but luckily, they were welcomed into the business world by local organizations and chambers with open arms.

“Holladay Properties, Portage EDC, and many more have been so helpful to us in this process. They were so welcoming and embraced us right away after B Nutty’s move to Portage,” Podolak said. “They would frequently reach out and make sure we had everything we needed in order to thrive here. We’ve gotten nothing but support every step of the way.”

Both Thompkins and Podolak noted how nice it feels to be part of a community that strives to produce growth and expansion in all areas.

“The Holladay team really took the time to compile a list of resources for us as we began to find our place in the Portage community,” Thompkins said. “I would tell other small companies to ask a lot of questions and advice. There’s so many people in Portage who are excited about the city’s ongoing growth and would love to talk with you and help you find your fit.”

Although B Nutty peanut butter flies off the shelves of some of the biggest, well-known grocery stores in the USA, when it comes down to it, what truly matters is the B Nutty soccer family.

“Its not about the peanut butter, it’s about the kids. If it weren’t for our soccer family, we wouldn’t have made it through the first day,” Thompkins said. “It will always be about our kids and our team. Academics and soccer will always come first.”

On a typical Friday, you can find the B Nutty team closing up shop early and heading out to a soccer tournament.

“With soccer being a priority and the whole reason B Nutty started, we always try to work around it. We have an 18-seater bus out back always ready to hop into for a tournament,” Thompkins said.

Looking forward, Podolak, Thompkins, and the B Nutty team look forward to taking it day-by-day.

“The most exciting thing for us is learning something new every single day. We call this place The Nut House for a reason; It’s nutty. Every day truly is an adventure,” Podolak said.

To learn more about B Nutty, visit their website at https://www.bnutty.com/.