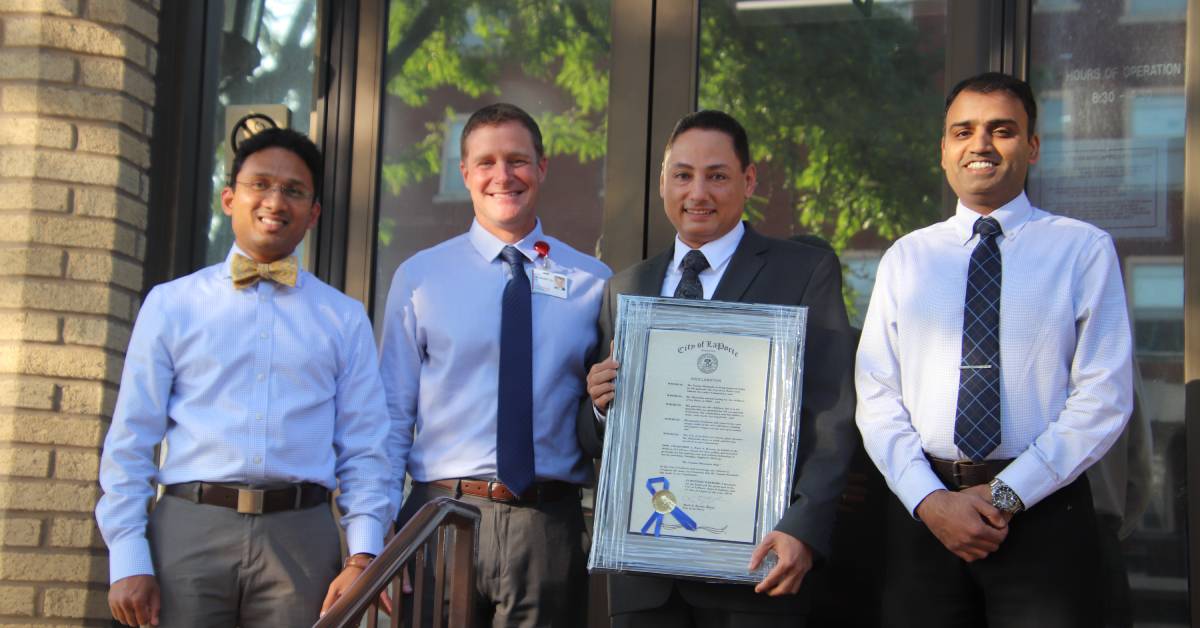 After a long day at work, many anticipate the moment they get to leave for home. For Dr. Usama Moustafa, pediatrician for La Porte Hospital and La Porte Physician Network, the work he does extends far beyond the doctor’s office. In fact, Moustafa makes a point to stay in contact with all his patients and their families—outside of their visits.

For families, this connection with Moustafa is important in ensuring their children’s health, growth, and safety. The effort and time Moustafa dedicates to children's health leaves an everlasting impression on the community and its youth.

To acknowledge his incredible service, Mayor Mark Krentz alongside the City of La Porte invited Dr. Moustafa, his family, patients, and friends to La Porte City Hall to make a special citywide announcement on August 5.

“Today Dr. Moustafa is honored by his patients, the City of La Porte, and the entire community. In 2007, Dr. Moustafa started caring for children at the hospital,” Krentz said. “His patients are the children, but it is the parents who are grateful for his exceptional dedication, compassion, and ability to make each family feel cared for.”

Mayor Krentz continued, “On behalf of the children of La Porte, it's in our best wishes, and with heartfelt gratitude for ongoing care and selfless dedication, I hereby proclaim Tuesday, August 6 2019, Dr. Moustafa day!”

The crowd cheered as Moustafa accepted his award.

“This is a great honor for me, and I believe it’s through hard work,” Moustafa said. “I believe in having a connection with patients. Making yourself accessible is important.”

Krentz said that Moustafa’s genuine care for each unique child will have the power to leave a lasting impact on generations to come.

Ashley Dickinson, CEO at La Porte Hospital, met Moustafa when she assumed her role two and a half years ago.

“Dr. Moustafa is just so passionate about his patients,” Dickinson said. “New parents are nervous. He takes all issues to heart and is always available for his patients.”

As CEO, Dickinson has heard countless stories of Moustafa’s giving heart. Many stories reflect Moustafa’s impeccable memory of each patient and their families, even if it’s been years since they’ve been in contact.

“When people move away, and he sees them back in the community at a grocery store, he will make a point to see how they have been doing,” Dickinson said. “I've even heard stories where he’s answered calls while out of the country just to get a prescription.”

The City of La Porte is a better place because of the impression Dr. Moustafa has made and will continue to make.

“The relationship with the patient does not finish by the end of the visit—it always continues,” Moustafa said.