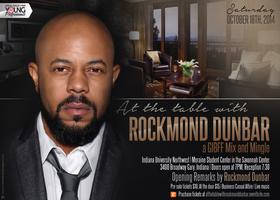 Actor, producer and director, Rockmond Dunbar will attend as special guest for "At the Table with Rockmond Dunbar" on October 18th at Indiana University Northwest Maraine Student Center, Savannah Center. This event is designed to act as a "bridge" between local, independent artists and positive models of success in the entertainment industry, and to serve as a catalyst for leadership development to up-and-coming talent.

Rockmond Dunbar (born January 11, 1973 in Berkeley, California) is an American actor, producer and director. He is perhaps best known for his roles as Kenny Chadway on the Showtime television drama series Soul Food, and as Benjamin Mile "C-Note" Franklin on the FOX television drama series Prison Break. In 2007, Dunbar starred on the short-lived TNT medical drama Heartland. He made a guest appearance on Noah's Ark as himself to give Noah (screenwriter and the main character of the show) some ideas about his movie Fine Art. He also had a recurring role on the UPN series Girlfriends, and is also known for his role as "Pookie" on the television series The Game. He was also a regular on the short-lived FX series Terriers.

Dunbar's other TV credits include guest appearances in Earth 2, Felicity, The Pretender, Two Guys and a Girl, and North Shore. In 2011, he joined the cast of FX's hit show Sons of Anarchy as the new Sheriff of Charming, Eli Roosevelt and later joined the role in the CBS crime drama The Mentalist as FBI agent Dennis Abbott.