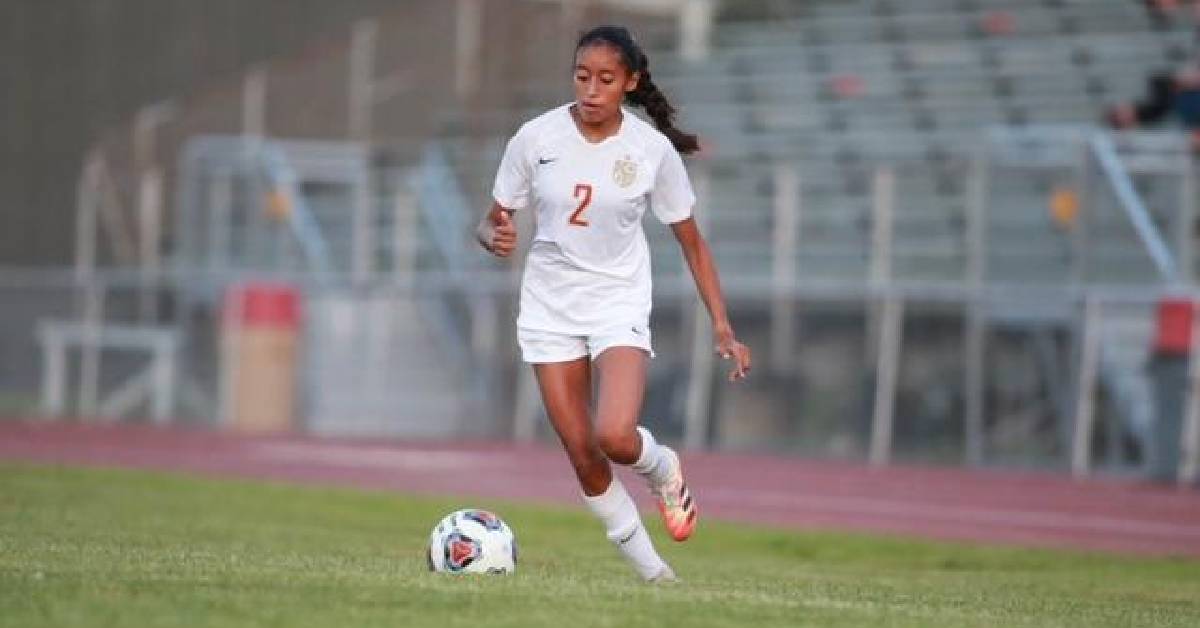 Photo credit: Region photographer Charles Beard. A prominent and talented photographer in the Region, his work can be found on his website at https://cbeardphoto.smugmug.com/ and his Facebook at https://www.facebook.com/CharlesBeardPhotography/.

School, cross country, soccer, repeat. This in a nutshell represents the weekly grind for Andrean High School Freshman Gina Cappello. The multisport fall athlete quite literally hits the ground running each week, chasing both her athletic passions of soccer and cross country, much to the excitement of Head Cross Country Coach Demetrius Clark and Head Soccer Coach Jeff Clapman.

“We are incredibly happy to have Gina as part of our team,” Clapman said. “She’s got the kind of dedication that is great to see from a coaching standpoint.”

Between balancing the physical demands of both sports and the rigorous curriculum of an Andrean education, Cappello’s dedication to her craft stands out in everything she does, and shines through in her performance on and off the field.

“Yes, it’s hard to balance, but I’ve found a way to even out the practices,” Cappello said. “I’ve definitely made some sacrifices to make this work, but it’s worth it.”

“Being able to handle that workload at such a young age is impressive,” Clapman said. “She makes sure she gets the work done for both teams as well as with her academics, and I’m very impressed with her maturity in that regard, especially as a freshman.”

Cappello maps out her schedule each week, dividing time equally between her soccer and cross country workouts.

“I give her certain workouts to do and if she misses a practice due to soccer, I’ll just send it to her and she gets it done,” Clark said. “We as coaches just do our best to monitor her workouts and ensure she doesn’t get injured, but she’s embraced the process quickly. I believe if she continues to put in the work and trust the process great things will come to her.”

Though it may be Cappello’s first year of high school competition, she is no stranger to either sport. Cappello has been playing soccer all her life, participating in club leagues leading up to her high school debut.

“I’ve played soccer my whole life,” Cappello said. “I love the feeling of competing and being on the field with my teammates.”

Cross country came into the mix during Cappello’s middle school years, and she initially joined as a way to stay in shape for soccer. Though soccer stole Cappello’s heart first, she loves both sports equally and doesn’t identify one over the other as her favorite. Now, she’s grown a soft spot for the 5k and feels just as much at home in a pair of racing spikes as she does in a soccer jersey.

“I started cross country in sixth grade because I thought it would be good conditioning for soccer,” Cappello said. “I ended up really liking it and decided to stick with it.”

If simply participating in both sports simultaneously wasn’t noteworthy enough, Cappello takes things a step further by being as a top-performing varsity athlete for both teams.

“She definitely plays an important team role for us and the girls in our program,” Clark said. “She’s one of our top runners and she is and will be a great asset to us.”

“She’s the youngest on our back line but you’d never know it by the way she plays,” Clapman added. “She was able to jump into that role pretty easily and help our team out a lot. She’s been a varsity starter for us and will only continue to build her skills as she progresses.”

Whether she’s playing as an outside defender on the soccer team’s back line or throwing surges on the cross country course, both coaches agree that Cappello’s work ethic, drive, and competitive nature are second to none.

“I feel her greatest strength as an athlete is that she thrives on competition,” Clark said. “She goes up against juniors and seniors, and takes on the upperclassmen without a second thought. I always tell her to just run her race and roll with the best of what she can be that day, and she does that really well.”

“Doing two sports is never easy, but especially when both are aerobic activities,” Clapman added. “She’s a hard worker and wants to be out there working on her skill and constantly finding ways to improve. She sets high expectations for herself and is disciplined enough to see them through on a daily basis, and that’s something I really admire in her. I really think the sky is the limit for her moving forward.”

Catch Gina Cappello kicking it with the soccer team and spiking up with the cross country team this fall, and hopefully every fall for the next four years.

“I love the feeling of accomplishing my goals and succeeding in both sports at the same time,” Cappello said. “I hope to stay healthy and compete in both for all four years.”