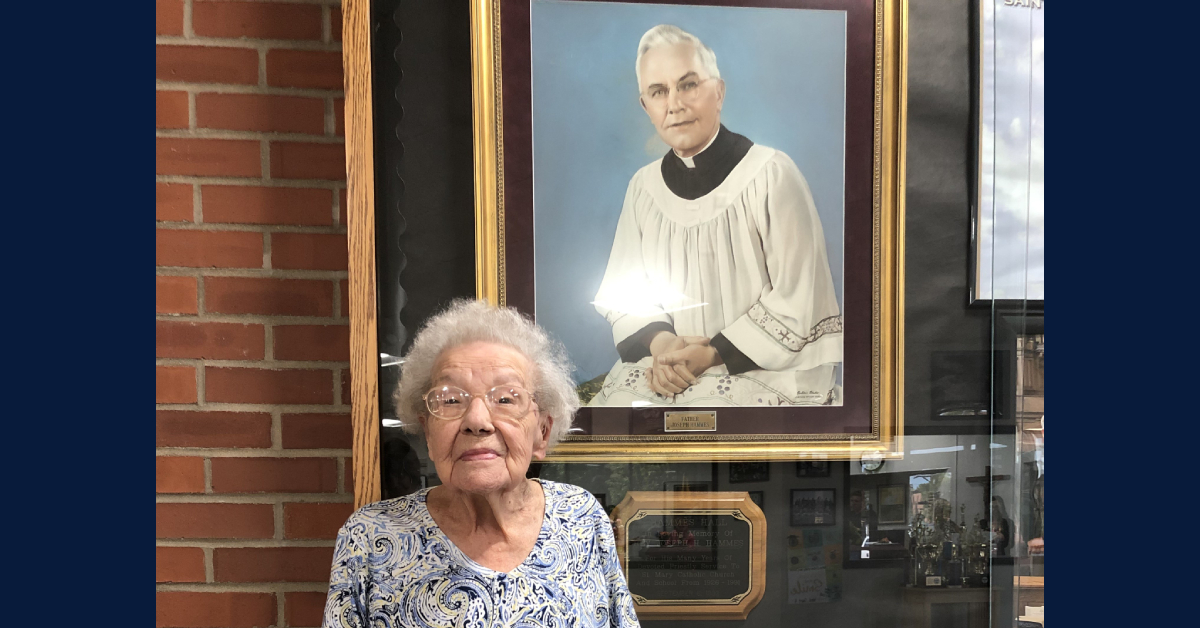 “A life well lived” sums up Elizabeth Louis's life.  Liz, called Mrs. Louis by the students at St. Mary School, is a 1933 graduate of the Catholic school in Crown Point.  She celebrated her 100th birthday in April.  One of the highlights of the school year is when she attends the student Mass at St. Mary’s.   She comes each spring to inspire the third-grade students who make their first Holy Communion the Saturday before her visit.  The pastor, Father Patrick Kalich, always gives Mrs. Louis the microphone and she encourages all the students, especially the first communicants to continue to come to church, just as she has throughout her entire life.

Liz was the next to youngest child in her family of seven children, 5 boys and 2 girls, all of whom attended St. Mary’s School.  The family lived in a 2-story house on Nichols Street that her father helped build. She remembers playing ball in the two-way street and said that there was very little traffic on the street in those days.

In those days, St. Mary’s school was for students in grades Kindergarten through eighth grade.  The school has since expanded by adding preschool.  In those days, the students went to mass every day instead of twice a week.  Each classroom, which consisted of a grade and a half, was taught by one of four nuns.  Another sister did all the cooking for the school. Liz had seven girls and three boys in her class and remained friends with a few of the students who lived nearby.  Liz was saddened when the old two-story building was torn down in the 1990’s.

While Liz attended school, Father Guethoff was the pastor.  Liz fondly remembers going with her father to pick up the new associate pastor, Father Hammes, from the train station when she was in second grade.  Father Hammes made quite an impression on Liz and the other children in the neighborhood with his motorized bicycle. She also remembers Father playing baseball with the students at recess.

Liz graduated from Crown Point High School in 1937 and married her high school sweetheart four years later.  They had three boys and two girls. She has eight grandchildren, five great-grandchildren, and two great-great-grandchildren.  Liz worked at the courthouse and one of her tasks was to get things ready for voting.

Liz has lived her entire life in Crown Point as a member of St. Mary’s Parish and has traveled extensively.  She has been in every state at least once; she went two times to Hawaii. She has also been to Europe two times.  She has visited the Vatican in Italy, the Eifel Tower in Paris, and the Alps in Switzerland. She has cruised the Panama Canal, and at the age of 86 she went to Costa Rica where she did some zip-lining.  The Rocky Mountain National Park in Colorado was one of the favorite places she visited. She fondly recalls an occasion when she hiked to the top of Longs Peak, she started at 4 am and hiked one mile up, not returning until 9 pm.  Mrs. Louis is an inspiration to the students of St. Mary’s school and everyone she meets.