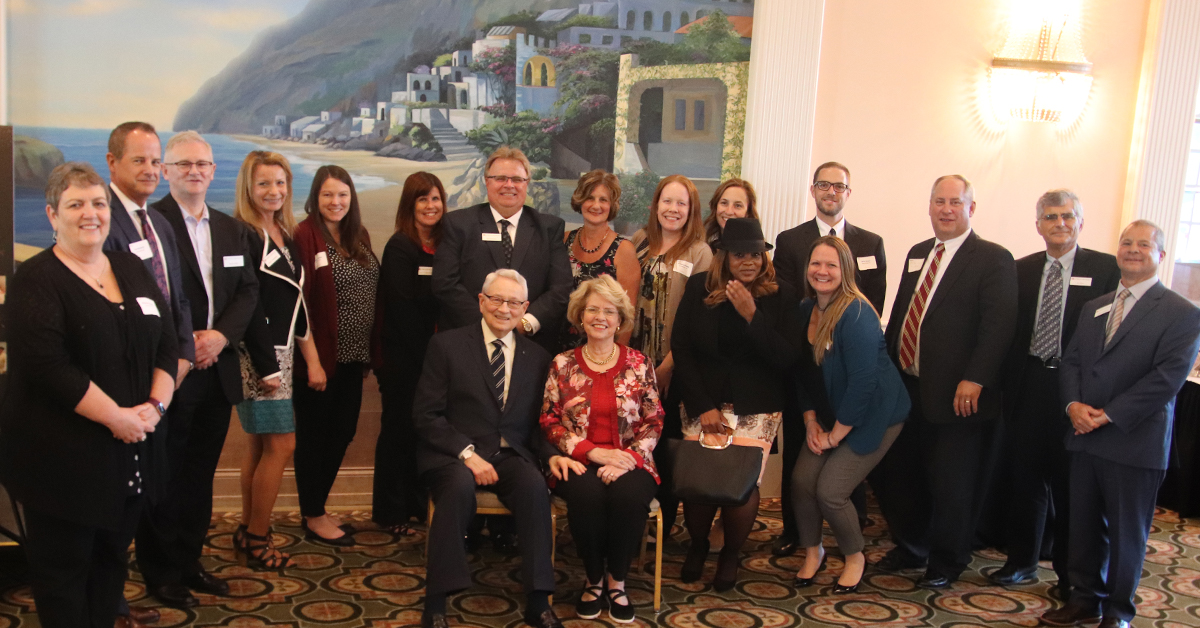 Lakeshore Chamber of Commerce celebrated the lifetime achievements of Cal Bellamy and Frank Van Til at A Salute to Education on Wednesday night and unveiled the Legacy Foundation’s progress toward raising $100,000 to support East Chicago and Hammond students.

The fundraiser featured an open bar, a welcoming buffet and live music.

Franciscan Alliance’s Gene Diamond did his best to sum up Bellamy’s lengthy list of achievements and contributions to the community.

“There are several theories about how he does it,” Diamond joked, “one is that he’s actually triplets.”

Diamond misspoke when he suggested that Bellamy is 200 years old. In fact, Bellamy is a spry 77.

Jeff Strack honored Van Til, speaking of his approach to business and life.

“I admire how he treats people,” Strack said. “He gives back in such a humble way.”

Both men were duly recognized for their commitment to service and community. Their selfless endeavors have worked to make East Chicago and Hammond a better place.

Van Til and Bellamy took the stage to accept the honors and explain their contributions to the efforts of the Legacy Foundation. They thanked those in attendance for their generous support.

Van Til spoke of the changing educational needs for today’s students, highlighting why he pushed for the funds to go toward education scholarships.

“Businesses are increasingly in need of educated and skilled personnel in their workforce,” Van Til said. “These scholarships will provide financial support for students in East Chicago and Hammond.”

Bellamy spoke of the incredible value of leadership, and his quest to support the future leaders of our communities. He pulled for a portion of the Salute to Education Fund to go toward sponsoring students from East Chicago and Hammond to attend a leadership camp in Indianapolis and return to do 100 hours of community service.

“We hope by nurturing leadership, we can make sure Northwest Indiana has a good pool of leaders heading into the future,” Bellamy said. “We need the vision, the standards, the challenges and opportunities that leaders provide.”

Bellamy acknowledged that, in his 77 years, he has seen a lot and done a lot, but “for Northwest Indiana, our best days are just dawning.”

Bellamy joked that he retired “just over an hour ago,” but the joke was confirmed true when Kreig DeVault’s Brian Hittinger gave a brief “we wish you well” following Bellamy’s remarks.

Lakeshore Chamber’s Dave Ryan closed the honors by thanking the donors and those in attendance.

Mingling and congratulations to Bellamy and Van Til closed the night.

A Salute to Education provided an uplifting look back at the careers and service of two of Northwest Indiana’s servant leaders. Their commitment to leadership and dedication to education, especially in East Chicago and Hammond, is an inspiration to act with integrity, learn and lead with purpose, and give back to the community that has given so much.