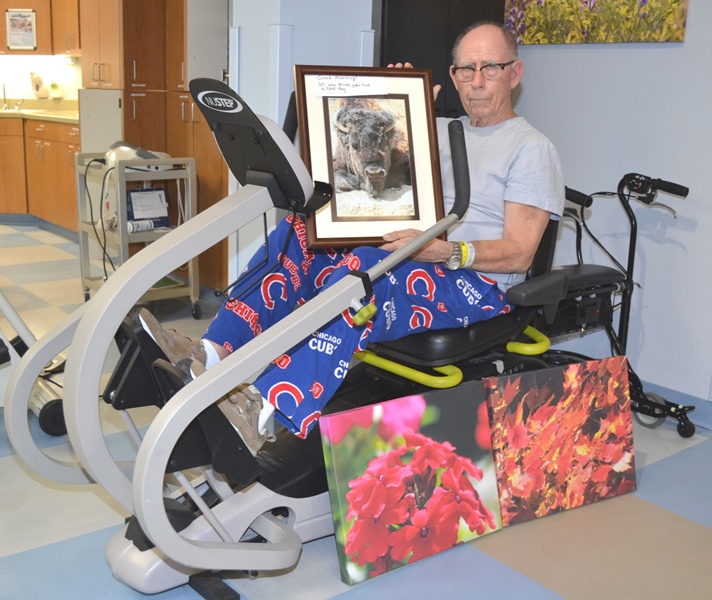 Paul Pavot was so in focus with the treatment he received at the Rehabilitation of Chicago at Franciscan St. Anthony Health-Michigan City, that he wanted to give back.

So the award-winning amateur photographer gave what he knew best, three enlarged, canvas-mounted photos he’d taken during the run of his longtime hobby.

“I was 7 or 8 (years old) when I started,” said Pavot, who now is 72 and a retired insurance agency co-operator (his wife, Renetta, still runs the business). “My father got me into photography; I just like taking pictures.”

The LaPorte resident recently spent about three weeks in the unit, where he was treated for a hip fracture and parkinsonism, said his physician, Albert DeRubertis, DO.

“He fell at home and injured his hip and also developed parkinsonism. He is progressing nicely,” Dr. DeRubertis said.

Parkinsonism is described as a clinical syndrome characterized by tremor, bradykinesia, rigidity and postural instability. It shares symptoms found in Parkinson's disease, from which it is named; but is not the same.

“I saw that the (RIC) dining room walls needed some life,” Pavot explained as the reason he asked his wife to bring in the photos. “I’ve got about a hundred of them in my garage so I decided, why not share them? It makes me happy to do that.”

Pavot planned to resume taking photos as soon as he was able. His works include portraits, landscapes, still-life and abstract pieces. One of the photos he shared with the hospital, showing autumn leaves, received a second-place award in a Lion’s Club International contest. Other award-winners are at his home.

Debbie Gitersonke, the unit’s care coordinator, said the photos indeed will adorn the aforementioned walls. “We probably will include plaque with them, honoring Paul. I told him he’s a celebrity,” she said.

Pavot described the care and treatment he received as “absolutely great.”

“There are so many people here who are dedicated to their jobs. They are very thorough. If I need a hand, they are right there to catch me. It’s unbelievable,” he added.