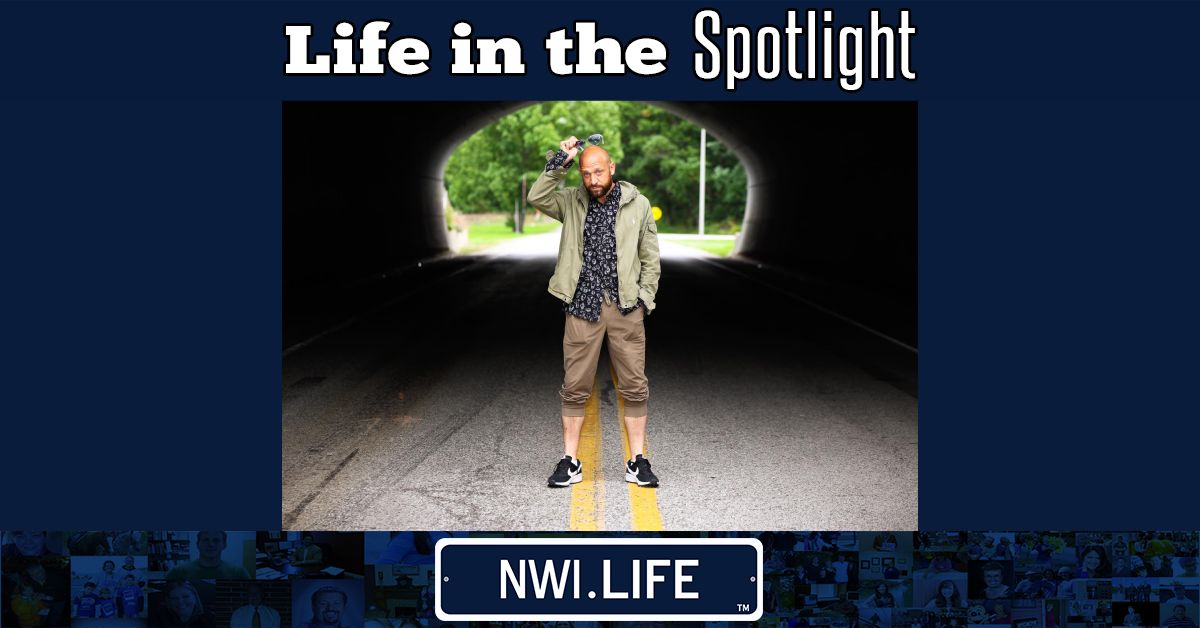 When Tyler Lennox-Bush is not behind a camera, he usually can be found in front of a classroom teaching about digital media. For the past three and a half years, he was Director of Studio Arts at Calumet College of St. Joseph. More recently, he made a career move working full-time as a 3D scanning technician for an engineering and construction firm. However, as he explained, education is his core passion and he still teaches part-time in the evening at Ivy Tech.

“I have been a teacher on and off for more than 20 years,” Lennox-Bush said. “Teaching has always been a calling for me. I have my master’s in communications from Purdue. I completed that prior to going to film school at DePaul. I have a good friend who runs the communications program at Ivy Tech, so I teach everything from workplace communications to public speaking, but I am actually enrolled in architectural drafting classes. Yes, I am going back for more schooling. It’s an addiction. I feel like there is so much knowledge you can gain and I value a trade-based educational program.”

Lennox-Bush said that for his undergraduate degree at Wabash College he studied fine arts. By studying fine art painting and sculpture he said found his way into the theatre first, before film.

“I went to film school at DePaul for my master’s degree in Fine Arts, and I also teach everything across the Adobe platforms from Photoshop to Illustrator and video editing, etc.,” he said.

“I believe strongly in media literacy,” Lennox-Bush added. “It’s an area that I have done a lot of curriculum design work around, tied to providing access to good visual tools to disadvantaged students. This is at the crossroads of art making and STEM (science, technology, engineering and math (includes computer science). I like to lump it all under one umbrella which I call ‘design’ because design is all about solving problems for other people.”

Lennox-Bush explains that teaching is not only about how to use those tools, but why are we using them.

“Part of what I teach is how we are empowering ourselves within our communities by using these new technologies and creating stories that are positive and life affirming," he said.

Lennox-Bush said he initially went to film school at DePaul with the intention of joining his sister in Los Angeles to work in television and visual media production, but that was prior to the pandemic. When he graduated, it was the height of the pandemic.

“COVID put a halt in my original career plans,” he said. “My focus at DePaul was more on the writing, editing, producing aspects of film and less on the post-production pipeline for visual effects. 3D scanning is a tool that is used in film and TV, but the application that I am using it for is for the engineering firms that do a lot of work in the mills and industrial sector.”

"Through the years, I have always had a camera and have tried to learn more about the art of photography," Lennox-Bush said. “Little by little I have been fortunate to work as a cameraman freelance in the theater in New York, Chicago and with my sister. Fifteen years later, we started our own television development company called TwointheBush Television Company, and we are specifically developing scripts that we have written. Our proposed show, called ‘Zenroom,' is a workplace comedy about a yoga studio in the suburbs. It stars Cherie Oteri from 'Saturday Night Live.' We were able to cast Cheri and she came onboard that project as an executive producer. We shot the pilot in Chicago.”

Lennox-Bush said he also loves telling stories using imagery. At his new job, he is enjoying working with sophisticated imaging software and being able to use those 3D scans to create virtual reality worlds.

“I am busy with the scanning and that is why I have decided to enroll in the architectural drafting classes,” he said. “These things tend to come together and collide in a world where people are building things virtually. Television is based on this stuff too, and these fantasy worlds are built in the same software.”

Lennox-Bush said that he is truly blessed and is grateful for the wonderful opportunities he has had in his life so far.

“I have a wonderful wife,” he said. “I have an opportunity to teach at Ivy Tech in the evenings. I am grateful for my work at Calumet College where I was able to accomplish a lot of great things such as establishing a media camp. We were able to secure a Lilly grant for the camp and I am hoping to continue to remain involved with those sessions and teach over the summer.”