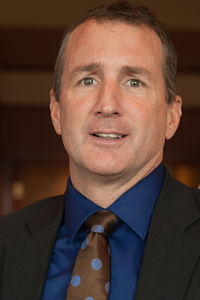 Born and raised in Merrillville, Indiana, Scott Mundell graduated from Merrillville High School before attending Indiana University, Bloomington. Currently, he lives in Valparaiso with his wife and two daughters, where they have lived since 1992.

For the past five years, Mundell is the Director of Business Development for the Northern Indiana Region of Franciscan Alliance, which includes hospitals in Crown Point, Dyer, Hammond, Michigan City, and Munster, as well as many outpatient facilities throughout the region, including Chesterton Health and Emergency Center. Mundell has spent his entire career in the health care field, previously working for two hospitals in Gary before joining the team at Franciscan Alliance nineteen years ago. In his role as Director of Business Development, Mundell has a wide variety of roles and responsibilities. His primary role is to evaluate and develop opportunities for our hospital. This includes working with physicians, evaluating new service lines, building new facilities, and establishing relationships and partnerships.

"It's one of the things I love about my job – it's never boring!" Mundell said. "One of the most interesting experiences I've have while with Franciscan Alliance was the development of our Chesterton Health and Emergency Center. Being a part of that project was a great experience – getting to see it go from a bold idea to the opening of the first Freestanding Emergency Department in Northwest Indiana. I learned a lot during that project, and I am so thankful for that."

In his spare time, Mundell volunteers with Rebuilding Together – Duneland, where he has been the Treasurer on the board for the past six years. In previous years, he also volunteered as a wrestling coach at Portage High School from 1996-2006. Currently, he is the Chairman of Board for the Duneland Chamber of Commerce for 2014. He has been on the Chamber Board of Directors for the past four years and will continue to serve after his term as Chairman is completed. He is also the Chairman-Elect for the Michigan City Chamber of Commerce, and will be the Chairman in 2015.

"My year as Chairman has been an interesting experience, far different than what I expected. In a good way!" Mundell said. "We hired a new president and rebuilt almost the entire staff during the first six months of the year. I feel really good about the team that we have assembled. Maura Durham, who we selected as the new Chamber president, is doing an outstanding job, and will continue to push the chamber in a positive direction. The future is very bright."

In what remains of his spare time, Mundell enjoys many activities, including running and working out. He is also an avid sports fan and loves to watch the Blackhawks, New England Patriots, and IU.

"To be honest, I spend most of my free time with my wife and our two daughters," Mundell said. "My wife, Helen, and I attend all of Alison and Haley's sporting and school events, and I wouldn't have it any other way."