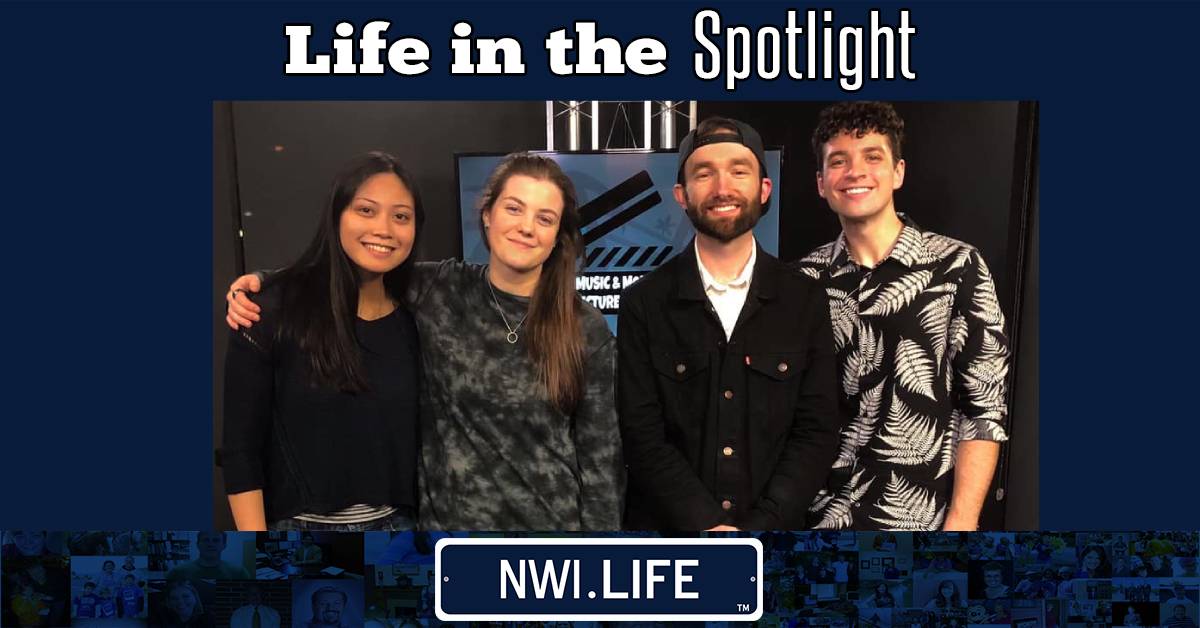 Lucie is pictured second from the left.

“Don’t let anything hinder you from reaching for your dreams and aspirations.”

This is what Lucie Ashmore had to say about her experiences in the United States. An international Purdue University Northwest student from Ireland, Ashmore has been balancing her life between graduate-level classes at the Hammond campus and being the lead singer and bassist for the renowned local band Cxpital.

Ashmore came to the United States from a small seaside town in Ireland called Greystones, and with the aid of a soccer scholarship, she attended Purdue University Northwest to attain an undergraduate degree in Communication with a concentration in Broadcasting. She explained that her passion for music led her to pursue this dream.

“I have always been fascinated with music production and its technical side,” Ashmore said. “I’ve been playing guitar since I was 8, which was sort of a prelude into me playing bass for the band in the future.”

In addition to music, Ashmore has a strong history in playing soccer. She has played on various teams in Ireland, so naturally, she pursued it in the U.S. Ashmore chose Purdue University Northwest due to its welcoming environment, which reminded her of a few colleges she had seen back home.

“The move from Ireland to the United States was quite eye-opening,” Ashmore said. “I was used to playing on small soccer fields on the side of the road, and to now play in large complexes honestly blew my mind. This, along with other things like getting used to American customs and behaviors, was just a part of my experience in culturally assimilating into this country.”

When Ashmore was a junior, she met fellow student Tyler Maximoff through one of their classes, and they instantly befriended through their appreciation and love for music. With Maximoff playing guitar, they wrote and recorded some songs for a couple of months, and later met Benji Grimler, who was interested in joining as a drummer. After a couple of sessions, they recognized that these songs were too good to not share with the world. They began to distribute their work online through streaming services like Spotify.

“We realized that we all had a really solid dynamic between us that could be developed even further,” Ashmore said.

A few months later, the group Cxpital recorded a song named “Ultraviolet,” which gave them some solid traction. Shortly after, it had played on-air in radio stations in both the United Kingdom and Ireland. That Irish radio station would eventually add the group’s first song “If You Talk” to their rotating playlist.

“Being a part of this band has raised my confidence immensely,” Ashmore said. “I’ve met a lot of great people through creating music and performing at venues in both the Region and in other nearby locations in Chicago.”

Ashmore is pursuing a Master’s degree in Communications at Purdue University Northwest. In the meantime, she and Cxpital will continue chasing their aspirations and keep doing what they love.

“My experiences here in the United States have been life-changing,” she said. “There are so many opportunities out there for me and for the band, and we’re going to take it one step at a time and see where it takes us.”

Cxpital is a Northwest Indiana-based indie/alternative rock band inspired by other bands like Red Hot Chili Peppers, Paramore, and The Maine. The band’s music can be found on Spotify, YouTube, and SoundCloud, and the group is active on Facebook, Twitter, and Instagram. Check out their recently-released song, “Made My Bed.”