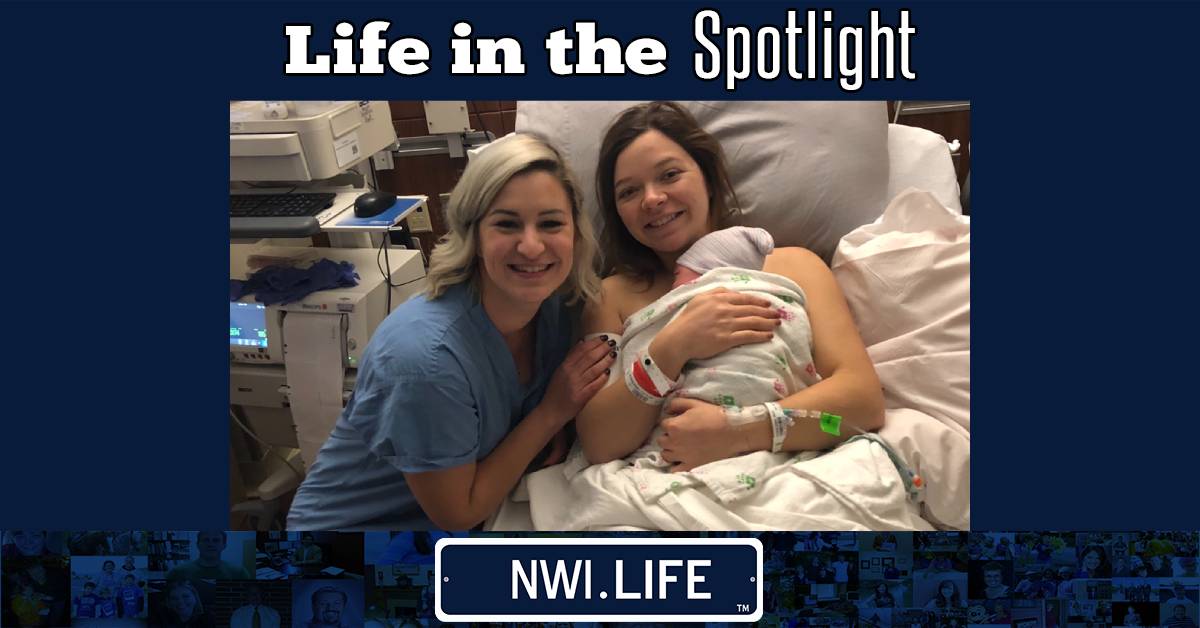 “I’ve always felt called to nursing when I began thinking about my options. I did some shadowing in the nursing field when I was in high school at St. Mary’s, and I knew that’s what I wanted to do,” Bjorklund said. “Some people say you will most likely change your mind when it comes to choosing a career path at a young age, but I never did.”

After graduating from Purdue University Northwest with a degree in nursing, Bjorklund started her nursing career at St. Mary Medical Center in Hobart. A new career opportunity quickly arose, and Bjorklund began her next journey at Advocate Christ Medical Center in Illinois as a labor and delivery nurse.

On the daily, Bjorklund can be found assisting doctors and helping patients in the labor, high-risk, and operating rooms of the birthing center at Advocate Christ.

“On an average day, I help deliver up to three babies,” Bjorklund said. “My main focus is charting during each process, but I also focus on patient support as well.”

The most positive part of Bjorklund’s job is getting to witness a new life experiencing the world for the first time.

“You might think once you’ve seen one baby come into the world, it’s not as incredible or shocking all of the other times that follow, but that’s really just not true,” she said. “I’ve learned so much with each delivery; my job is definitely not monotonous –I never stop learning.”

With the extreme highs of her profession also come extreme lows. Bjorklund has experienced miscarriages, stillbirths, and babies who are incompatible with life. However, she always pushes herself to find the silver lining and complete her job to the best of her abilities.

“What I’ve always thought to myself throughout this job, and what helps me get through the more difficult parts, is that it’s such a privilege to have the opportunity to impact someone during such a vulnerable and life-changing moment,” she said. “I just try to do my best to make that as positive of an experience as I can with whatever that woman is going through.”

During the COVID-19 pandemic, women are only allowed one support person in the room with them during delivery and everything that comes in between and after the fact. This makes Bjorklund even more hyper-focused on the patient’s physical and mental needs.

“My first priority is the patient and making sure she is supported,” she said.

Bjorklund’s co-workers also play a huge role in supporting each other during these difficult situations.

“There’s so much leadership to look up to where I work,” Bjorklund said. “Really, the backbone of any strong functioning unit is teamwork. We couldn’t do anything without each other, and the comradery is very important.”

Outside of work, Bjorklund enjoys spending her free time with her family, friends, husband, and, of course, her cats. She also loves to indulge in a good ol’ Netflix or Hulu binge from time to time. She recently picked up a few words of wisdom from Friday Night Lights character Coach Eric Taylor that resonated with her:

“Every man at some point in his life is gonna lose a battle. He's gonna fight, and he's gonna lose. But what makes him a man is that, in the midst of that battle, he does not lose himself."

Bjorklund has experienced some trial and error herself lately as she has been studying online to achieve her master’s degree within the Women's Health Care Nurse Practitioner program at Frontier Nursing University. Though her studies are challenging and time-consuming, she remains resilient and optimistic.

“My philosophy is to just take it one day at a time and not focus too hard on the things I can’t control,” she said. “Ultimately, the most important thing to do is to keep going and try to succeed.”