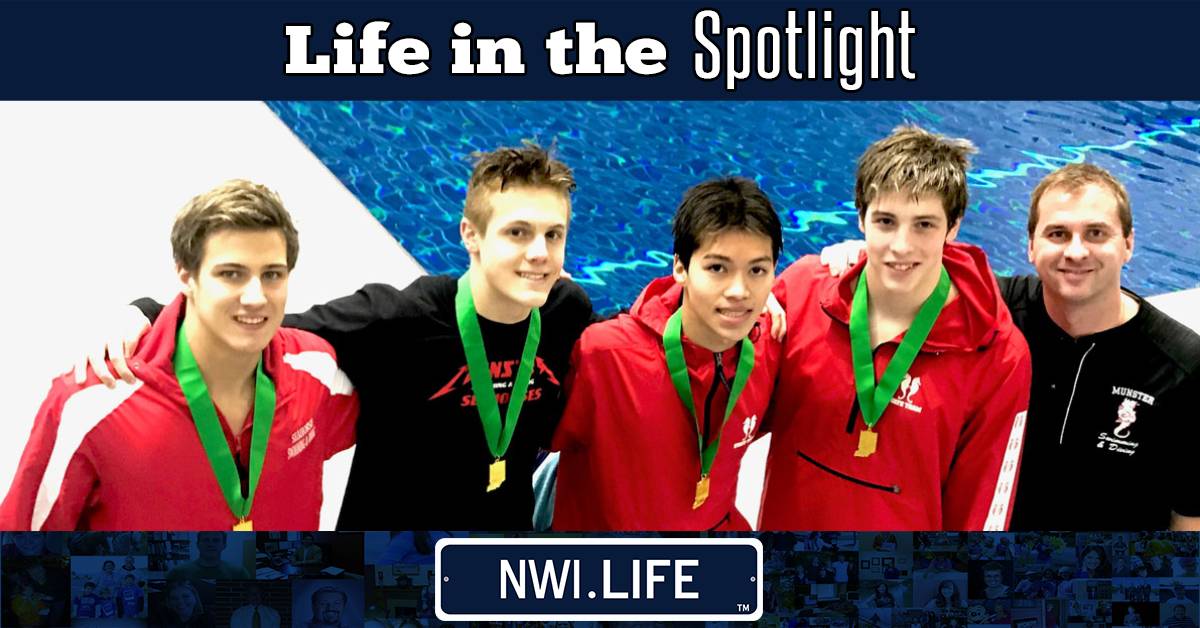 Beating a rival in competition is no small feat, but winning against yourself is a different kind of victory.

Senior student at Munster High School Kyle Adams claimed such a triumph when he beat his school’s record in the 100 Breaststroke - a record previously set by him. Adams beat his own record with a time of 54:08 during the finals of the state competition hosted at Indianapolis IUPUI his junior year. He had originally set the record his sophomore year.

Adams recalled his teammates’ reactions when he broke his previous record.

“They were pretty excited,” he said. “I mean, it’s kind of like all the energy down there is always peak excitement. It’s more of a group rather than an individual ‘Hey, good job.’ We did it as a team.”

As for his own reaction, Adams said, “That felt great. I wish I could have done it this year.”

Adams had been building up to that moment for years. To date, he has been swimming for 11 years, and first joined a swim team when tryout papers were circulating at his school around age 7.

“You know, originally, I just did it out of fun but then it got to the point where you’re working hard. I didn’t know I was going to get this deep into it, but then you kind of have to stay with it. I guess I stayed with it a really long time, but it’s paid off so I’m content,” he said.

Recently, Adams’ swim team, the Munster Seahorses, had a change in leadership when coach Tina McNulty took over for former coach, Mat Pavlovich in 2019. Adams recalled having known of McNulty before the switch.

“Knowing her was a good step in strengthening our relationship because our last coach left the team for Chesterton, so it was nice to have a familiar face take his spot rather than somebody we didn’t know,” he said. “I think our relationship grew on that as did a lot of swimmers’ relationships.”

“A lot of people didn’t really know what to expect, but we were happy because we spent a lot more time in the weight room this season and I think a lot of swimmers liked that,” he said. “We do a lot of out-of-water workouts, but we also do a lot of drill work as opposed to just distance. There are certain days for certain drills.”

Outside of training in and out of the pool, Adams is a music enthusiast and plays guitar.

“I love playing music,” he said. “That’s huge in my life for sure. I play the guitar a lot. I have a Gibson Les Paul and I’ve also got an Epiphone Les Paul.”

He has guitar amps in his basement and enjoys putting the improv of jazz into rock. Adams has a few friends who also play instruments and they formed a band in junior high.

“I’ve been in this band since 8th grade,” he said, “because it’s just me and my friends and we all just happen to play instruments. It’s called Sunshine Delirium. My friend used to be on the swim team and we thought it up while doing a kick set.”

Adams and his friend, Ben, toyed with the name Sunshine Delirium and the Electric Wombat, in which Ben would be the electric wombat. Ben plays the drums, and the other band members, Cooper and Ty, play bass and guitar respectively.

While Ben plans to attend Eastman School of Music, Adams plans to attend the University of Iowa in the fall where he received a swim scholarship for his performance with the Munster Seahorses.