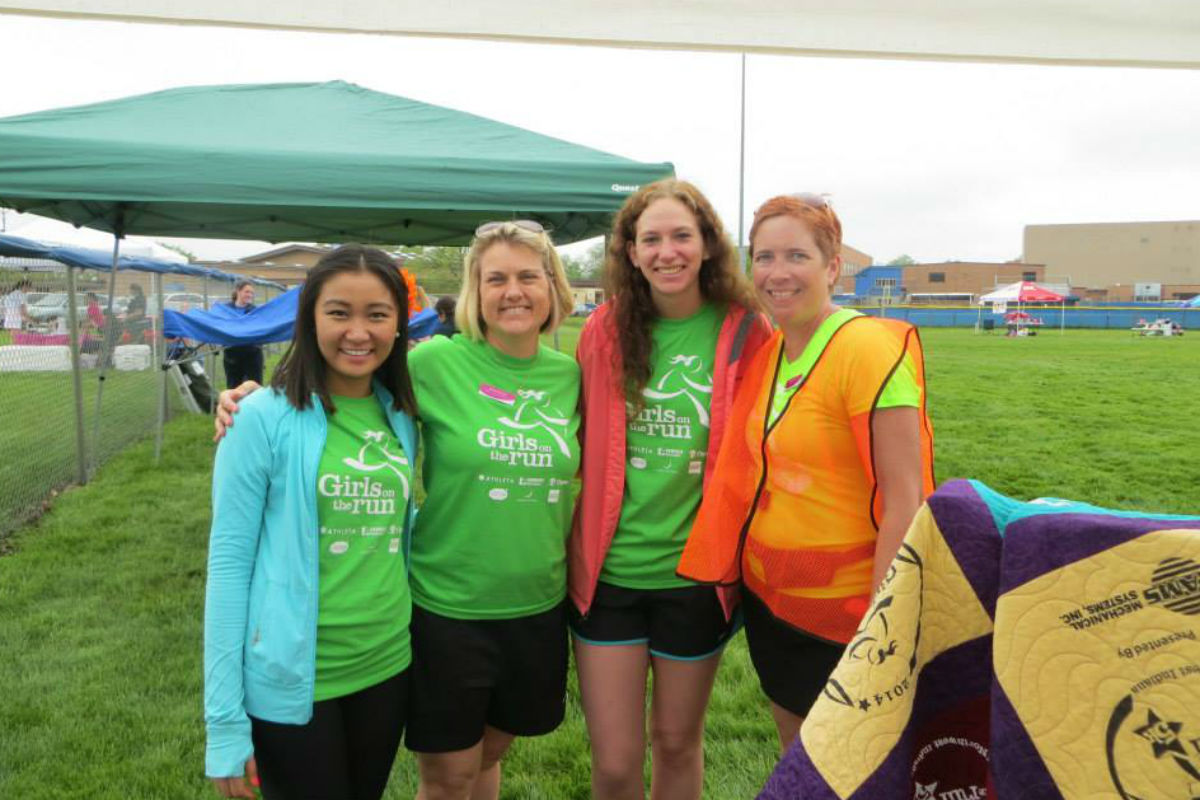 At a recent convention, Jill Kim met her one of her heroes, Kathryn Switzer. In 1967, five years before women were officially allowed; Switzer was the first woman to run the Boston Marathon. At one point, the race director forcibly tried to remove Switzer from the race. But, Switzer resisted, knowing that if she didn’t continue running, it would be harder for the women who followed her.

In getting her copy of Switzer’s book signed, Kim said to Switzer, “Thank you for all you have done for women in running.”

Switzer in turn said to Kim, “Thank you for all the lives you have changed through your involvement with Girls on the Run.” Kim still gets choked up as she recalls this moment.

But, Jill Kim did not set out to affect the lives of thousands of young girls. She had envisioned a very different life for herself. Kim grew up in Highland and attended Valparaiso University where she studied Political Science. After college, she spent a year with the Lutheran Volunteer Corps working for the Mozambique Support Network, which raised awareness and helped fight the effects of apartheid in South Africa.

Jill then worked as a case worker for Lutheran Social Services of Illinois, which led her to pursue a Master’s degree in social work at the University of Chicago. Along the way, she and her husband Art had three kids and made their home in Chicago. When their youngest daughter was born with a brain abnormality, the Kims returned to Highland to be closer to her family should they need assistance. In the meantime, Kim kept active being a stay at home mom and an avid runner.

It was her passion for running that led her to read a life-changing article in a 2006 issue of “Runner’s World”. The article discussed a nationwide running program based in North Carolina called Girls on the Run. Using a 10 week after school curriculum, its mission was to use running to inspire girls to be joyful, healthy and confident. Kim felt very passionate about this idea and contacted the organization. The application process included proving there was a need in the area as well as local support for the program. In 2007, Kim received approval from the national organization and Girls on the Run of Northwest Indiana became its own 501(c)(3) nonprofit organization.

“Once we started, we received community support right away,” says Kim. “Munster-Highland Tri Kappa, a philanthropic sorority, came through with financial support. The Highland school system was also receptive to us starting a program in their schools.”

During the 10 week session, girls in 3rd through 8th grade are taught important life skills. The girls develop a sense of confidence in who they are, build strength of character and learn to treat both themselves and others with care and compassion. Along the way, running based games and activities are included as the girls work to achieve the goal of running a 5K race. The goal race is not timed and every girl receives a medal. .

“In the Fall of 2007, our program consisted of 1 team in 1 school with 15 girls,” recounts Kim. “This past Spring, our program had 1,000 girls on 63 teams in 56 schools. All of this is possible because of our hundreds of volunteers, staff and board members who bring such passion to the program. We are very blessed that this program attracts such wonderful people. To date, our program has touched the lives of over 4,000 young girls in Northwest Indiana.

Despite their success, Kim points out that there is still much work to be done.

“We need to get our program into every school in Northwest Indiana. Many of our inner city schools are without programs. We also need to concentrate our efforts on the underserved rural areas. We currently only have one site in Jasper County and I would like to expand into Newton and Starke Counties as well.”

“At its core, Girls on the Run strives to get girls to be comfortable with themselves. We want girls to be the best that they can be and we create a space that allows that to happen. We want our girls to not be afraid to raise their hands, to speak up in class and to say ‘no’ to bad ideas.” says Kim. “We want them to know what they stand for and to know that they each have value. Our girls learn to set goals and exercise, to reach their limitless potential and boldly pursue their dreams.”

There are many ways to help Girls on the Run affect the lives of more young girls.

“Start a site, offer to coach or join our charity running team. We want to change our corner of the world one girl at a time and we need help to do it,” says Kim.

For more information, please visit their website at gotrofnwi.org. You may also contact Jill Kim directly at gotrofnwi@yahoo.com