Northwest Indiana. This little region is IN the middle of the U.S. It is IN between Chicago and Michigan. It is IN an area that has 40 miles of coastline, the INdiana Dunes State Park, INdustrial companies, and INcludes a lot of cool people.

Jenny Soffin is the creator of The IN Coast, a new lifestyle brand that represents the love those in Northwest Indiana have for their Lake Michigan coast.

Soffin grew up visiting the beaches and the Dunes in Chesterton with her sun-worshipping parents while living in Lansing Illinois, the town situated on the border of Indiana and Illinois.

The family was a beach family and when Soffin grew up to get married and have her only family, that sun and sand-loving personality was still there.

She and her husband Eric – who also grew up on the water – met at Western Michigan University and soon after graduation they moved from the Midwest to California.

“He’s got boating and the water in his blood and I’ve got boating and the water in my blood. I am an Aquarius, which is February birth-month, and Aquarius’ are the water bearers, so I have always been drawn to the water,” she explained. “We lived in San Francisco for 10 years. We had our daughter (Maddie) out there, and then when we had our son (Max) we were drawn back to the Midwest. Everyone here is so nice and I wanted to raise some good wholesome Midwest kids.”

They moved back to Illinois, but came across the town of Ogden Dunes when looking for a place to dock their boat, she said.

Soffin was in marketing field while in California, but decided to stay at home with her kids when they were growing up. Yet, her passion and love for Lake Michigan couldn’t keep her mind still.

The idea for The IN Coast brand literally hit her on July 21, 2016, she said. Friends from out West were visiting and they were shocked at how nice the beach was here, she added.

Cool doesn’t even come close to describing this mother who substitutes teaches and coaches cross country at Discovery Charter School where her kids attend, coaches Little League in Portage, knows every sand-grain of the Three Dunes Challenge, and is a pro at standup paddle boarding.

For her, it is all about having fun.

“I just want to let the kids know to have fun,” she said. “Everything these days is so serious. Can’t we just have fun? I always make sure to tell kids whatever you’re doing you have to have fun. Once you stop having the fun the magic is done.”

Fun is also the backbone of The IN Coast, the brand that epitomizes that “family fun-in-sun-mentality” whether you’re hiking a sand dune or lounging around at home.

Soffin started with t-shirts for the brand, after sketching up a sunny, Indiana logo.

“I said, ‘Let’s just start with the t-shirt and see how it goes,’” she said. “I had decided to do a very small quantity of women’s, men’s, and kids, and they sold out in four days! I sold them in the back of my car in the school parking lot.” 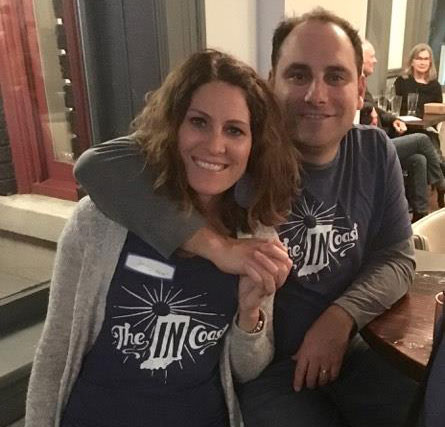 In the beginning of the company, Soffin also submitted and won a spot in the Dig the Dunes 2017 Calendar with a photo she took of the beach. While writing a short biography for the calendar, Soffin said she put the link to her new website, thus putting herself and the brand out there for all to see.

“Winning the contest gave me the courage – not the courage, I always had the courage and the right idea – but I never knew the right time to launch it,” she explained. “I took the leap of faith and put it out there, then it literally has snowballed from there.”

The brand has expanded from t-shirts to coffee mugs and wine glasses, car decals, and to a future of more items Soffin is currently dreaming up.

“I have had so much good feedback. It is a feel-good brand that ties in Lake Michigan and Indiana as far as clothing,” she said. “I want to build a lifestyle brand. People are so active here.”

The company is more than just a t-shirt logo. Soffin’s vision is to show how special Northwest Indiana is, rather than just being the town to stop for gas while heading to Chicago. She hopes to incorporate the brand into local shops, the Farmer’s Market, and perhaps selling them from an old VW Bus at the beach.

She also wants to weave her passion for working with kids into the brand by getting her own children and other Discovery School kids to help with the website by writing why they love being an IN Coast kid.

The company is young still, but that will remain the goal: to be young at heart always.

Soffin welcomes all to pull on the t-shirt and go for a hike, go swinging on the playground, go have ice cream for breakfast.

“The company is young at heart,” Soffin said. “It will stay fun, because it comes from the heart. It is turning into so much more and I love it.”

Head to Soffin’s website: www.theincoast.com and check out her Facebook page to see photos from other IN Coasters having fun in their t-shirts!