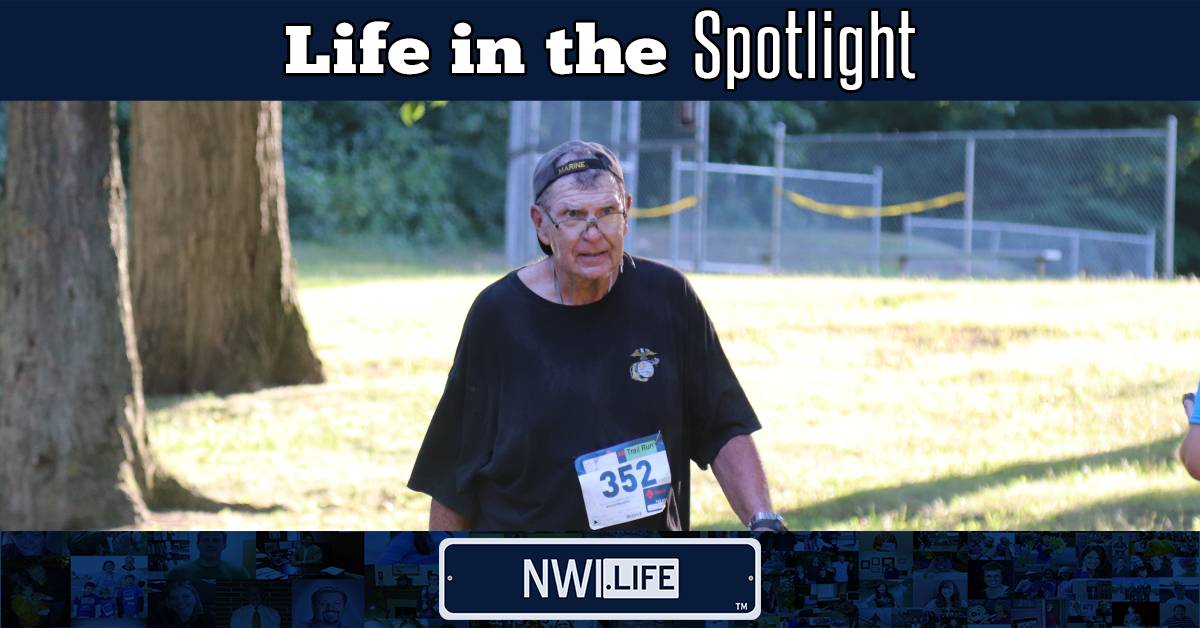 David Ralston of Hammond, Ind., knows what it’s like to claw his way to health and happiness, one foot race at a time. At 74 (he’ll be 75 in December), Ralston has already completed 80 races this year, from 5K runs to his first marathon in early October.

“I‘ll tell you what—I always call it God’s last second chance,” he said. “I’m sort of a repurposed person. I came out of Vietnam and I was pretty scrambled. I really had a bad taste of survivor’s guilt. God let me fall far enough and he opened my eyes up, and I’ve been sober about 25 years.”

Ralston returned from Vietnam in 1970 and found himself right back into the mills, pushing a broom and hiding his feelings in the bottle. He knew he wanted to do more.

“I read an article in a discarded paper about a federal program starting in Hammond, looking for people who wanted degrees but had no educational background,” Ralston said. “I spent a couple summers at Indiana University, Bloomington and eventually came away with a master’s degree in science education.”

He put that degree to good use for 40 years as a 7th grade teacher in the Hammond schools, the majority of that time at Hammond Clark. He also coached football, girls track, soccer, and wrestling.

“I didn’t win much, but in the end, I turned out some pretty good people,” he said.

A bunch of those pretty good people – now adults – showed up to cheer him on during his first marathon this year, bringing tears to Ralston’s eyes.

Ralston decided to try running after he was diagnosed in 2015 with a life-threatening heart condition, atrial fibrillation. He had ballooned to 280 pounds, and doctors told him, “You worry about your weight, and we’ll take care of your heart.”

“I got out and started moving around a little bit – I’d walk and rest.  In 2016, I got into my first event, and I just knew it at the end I had found something,” Ralston said.

It was one lap out at Wicker Park in Highland, about 2.2 miles– a non-competitive race to support the local chapter of Disabled American Veterans (DAV).

“It was very moving being a veteran and being among veterans and everything started coming together for me,” he said.

During his first marathon– the Beyond the Beach race through Miller Park and other parts of Gary – Ralston’s running community turned the race into sort of a “This Is Your Life” experience for him.

“It took me over nine hours, but I’ll tell you what, thanks to the support of my children and grandchildren, it was an incredible thing,” he said. “Unbeknownst to me, people from Cal Striders had gone online and told people what was going to happen – that I was going to run my first marathon. The story gets better as the day went along. I got reunited with a woman who is 91 years old and realized that in 1948, I was the ring bearer at her wedding. She was a cousin to my mother,” Ralston said.

At one point, the race took Ralston past the house where he grew up.

The second lap around, the owners were out in the driveway waiting to connect with him.

“I had a brief conversation with them. I said, ‘there’s a brick patio and retaining wall behind the house – I know because I built it.’ They were just amazed,” Ralston said.

His roots as a U.S. veteran propel Ralston to keep going. During the marathon, two men from the U.S. Marine Corp helped him through the first section. After a recent Marine reunion in Washington D.C. where Ralston visited the Vietnam Veterans Memorial Wall, he had a transformational moment.

“I made a vow that day while facing that wall: I will be a better person. I will be a giver, not a taker. And I dedicate every race I do to the 58,000 men and women who never had the opportunity I had. I’ve taken a lot for granted in the past, but not now,” Ralston said.

Ralston’s coaching mentality has never left him. He continues to encourage people to get up and move because he knows it can help them.

“My story is my story, but if anyone can gain anything from it, I’ll say, ‘if you’re thinking about starting to move, just try it,’” Ralston said. “I’ve transformed from a pothole to a speed bump, and anyone I come into contact with who needs to pull their head out of the bottle, I just encourage them. I would have never thought I could be as happy as I am right now.”

With that happiness, comes humility. As he faces his own aging body, which also incurred a knee replacement in 2010, Ralston admires those around him and remembers he’s lucky.

“I’ve been in the company of giants and heroes all my life. I work best in the shadows. I think a lot of credit goes to everyone else out there who is going through something, particularly with advancing age,” Ralston said.

“I don’t know if this adds a minute to my life or anything like that, but it sure brings a lot of sunshine to this old man’s heart.”