Care Packages for the Region, or CPR, is the new, simple project one region-er started to help her fellow community members. There is nothing fancy – the drawstring bags may have the year 2014 written on them – but that is not the point, owner Dara Grady explained.

It is a way to “double down on social justice” and to teach our kids there is always something we can do.

Grady is from Munster and is now living in Crown Point with her husband and two kids, Tristan, 11, and Karac, 7.

She attended Indiana University, Bloomington for a degree in sociology and liberal studies, and since then has been enrolled at IUN, where she has received her masters in Liberal Studies, and has one year left to get her masters in social services. Her overall goal when she first started school was to be able to do case management work and provide people with social services.

In the last year, that dream came true.

“I decided to take year off from school and inadvertently started this project,” she said. “I just fell into it.”

The CPR project started as a way to help provide the little necessities to people living homeless in the Chicagoland and Northwest Indiana area. The idea of care packages to provide to the homeless popped into her head.

“Making care packages is no big surprise. You go online and you can find care packages to order,” she said. “I thought it would be a cool project for me and the kids.”

For the first round of packages, Grady went to the Dollar Tree store and bought items she found on the recommended lists, things like toothbrushes, soap, snacks, and water bottles. Grady and her kids then compiled together three large bags and talked about the importance of the project and about what it would be like not to live with certain items we take for granted.

Then, on her way to picking up her Chicago Marathon running bib, Grady stopped to hand out her bags.

“I was Hell-bent on delivering these packages, so I went to Chinatown and went in the alleys, where people aren’t accessing services,” she said. “I sat down next to this woman and spent an hour with her listening to her story. I was not expecting that. She wanted the conversation if not more than the stuff in the bag.”

Grady delivered three bags, went home, and headed back out to the Dollar Tree to get more.

“I was very moved and wanted to do more,” she said. So, she and her kids went to work on three more bags, filling them up with even more items than before.

Grady set up a GoFundMe site where the community began to pour into their donations and help.

Just in three months, she has raised more than $2,500 through the site, in addition to thousands from private donors, and received piles of new items. Race directors of local races have sent in old drawstring bags to hold everything, pairs of gloves were donated, and many people have given personal items, like toiletries.

The local First United Church gave Grady and her team space to pack everything, in which the local girl scouts troop helped pack them, and Grady’s son’s boy scout troop donated a box of more drawstring bags. A pre-school with 88 families also donated items, filling an entire room of Grady’s house.

So, Grady had the items, had the ambition, had the happy helpers, yet she needed a better way to distribute the bags rather than just taking to the streets. 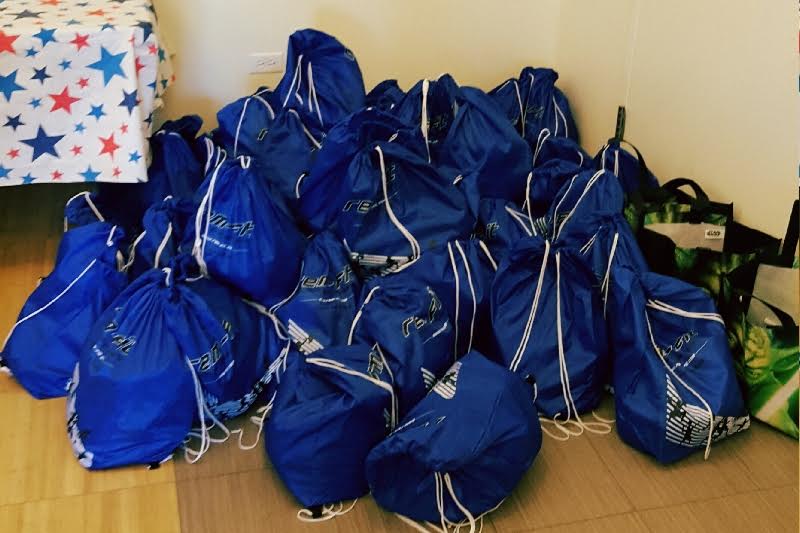 At one point, she and her friends headed to a food pantry in Rogers Park in the Chicagoland area, and were handing out bags and were put to work dishing out meals.

“We were tired afterward!” she said. “We actually ran out of bags and I felt terrible about that. The kitchen staff told me there were people coming in that had never been in before or had not been in, in a long time because they wanted the bags.”

The word was spreading and Grady was ready to do even more.

“By then I already had enough money to do it again after that round,” she said. “So, I tried to think of who else needs care packages: the homeless and veterans of course.”

She started working with Hope Manor II in Chicago, which is a residential facility of Volunteers of America Illinois that provides transitional housing to veterans, as one of the delivery locations of her CPR bags. She has already made one trip to the manor with bags of supplies and will make another one March 25th.

Every “round” includes as many bags as she can at that time, and she is trying to fit as many rounds as she can, delivering them every few weeks or few months.

It has only been a short period since she first delivered a bag to the woman in Chinatown, but Grady has learned so much, which has pushed her to expand her goals.

“I would like to provide or find a way to offer other services beyond care packages, like mentoring, tutoring, literacy services,” she said. “Did you know homelessness is a problem for female veterans more so than males? I didn’t know that. It is fascinating and something I want to learn more about.”

Grady is in the process of applying for her 501(c)(3) status so that she can become a certified not-for-profit organization, which will allow her to acquire more donations.

A website is being set up and more and more ideas of ways to help the community are popping into Grady’s head.

“There are lots of different ideas and for every idea I have, I see 12 more awesome ones!” she said. “I see so much and still say, ‘Wow, there is so much that can be done if you can get the resources.’”

Grady is also a marathon runner, taking on her second Boston Marathon this spring, and enjoys partaking in the many events put on by the Crown Point Parks and Recreation Department in the summer with her family.

Grady started CPR to make a difference and to teach her kids a life lesson and now it has turned into a stand for social justice, because everyone deserves a home, a toothbrush, and a little care.

To donate to the CPR GoFundMe page, click here, plus here is her website, www.cpr-inc.org for more information.