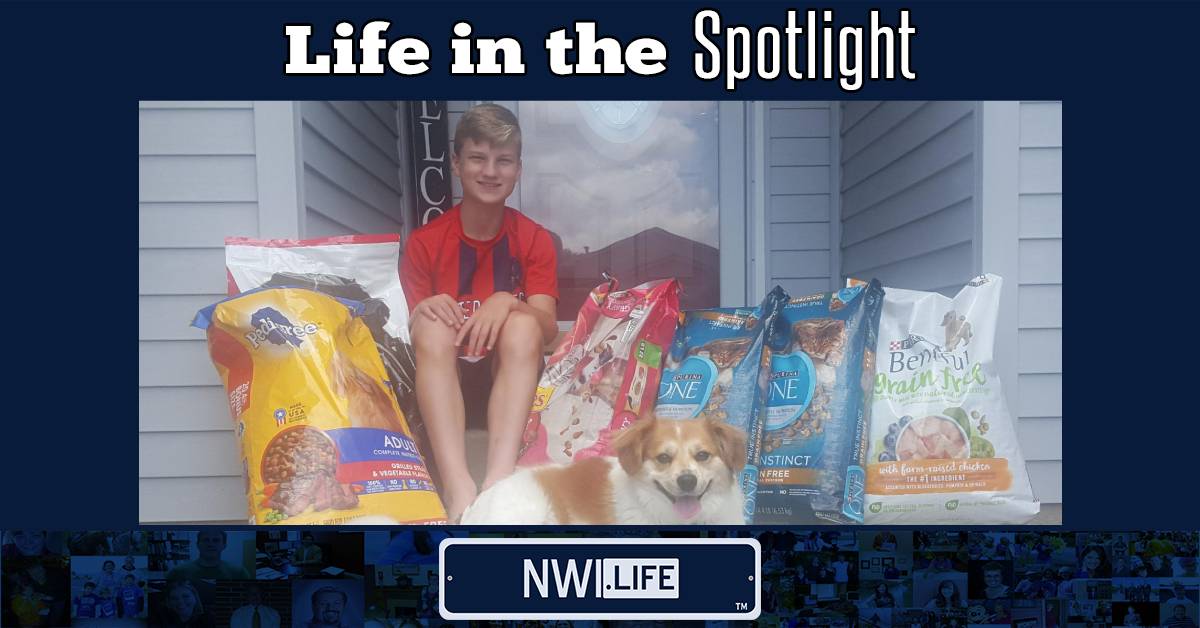 You can never be too young to make a difference in your community, as 14-year-old 8th-grade student Craig Rusin demonstrates every day. Rusin is the founder of Do Good – Be More, a nonprofit focused on helping homeless animals.

Rusin and his family have always been volunteer oriented. They were helping out at a struggling shelter when he found a dog, Spot, that he adopted. Unfortunately, the shelter eventually could not afford to stay open and had to close down.

“I just love animals,” Rusin said. “If we could’ve adopted all the dogs that needed a home, we would’ve. Instead, I decided to be there in any other way that I could.”

Do Good – Be More centers its efforts around collecting food for the local Schererville Animal Shelter. It is somewhat tucked away and has a rather strange problem in that the air conditioner does not run unless the lights are on, so the lights have to stay on overnight. Costs add up, so Rusin wants to help where he can.

“We’re just giving them food to help out,” he said. “It’s kind of tucked back in there and not a lot of people seem to know about it.”

Near the beginning of August, Rusin and Do Good – Be More launched the #aniMEALS2020 Pet Food Drive. They set a goal of collecting 2020 pounds of pet food before he graduates 8th grade on June 1, 2020. By September 21, overwhelming support shattered that goal, raising 3090 pounds of kibble with eight months still to go.

“It’s pretty cool to see the support,” he said. “I’m glad that other people want to help me help others, help shelters, and help animals.”

Rusin is currently organizing See Spot Run, a 5k Fun Run/Walk on November 4. All funds raised will go directly toward more pet food for the Schererville Animal Shelter. Organizing events and coordinating Do Good – Be More is a lot of work for a teenager to take on, but his mother was thrilled when he approached her about starting a nonprofit.

“She was happy that I wanted to help out with something that she was interested in, too,” Rusin said. “If everyone does just a little bit to help out in their communities, the world becomes a better place.”

It is not Rusin’s first time organizing something like this. Last year, he helped put together Kicks for Kids, which collected 56 pairs of soccer cleats, 104 jerseys, soccer balls, air pumps, and $400 for students of Notre Dame de la Merci in Haiti.

“It’s a parish in Haiti that needed supplies,” Rusin said. “We wanted to give them something fun to do outside of school.”

Rusin and his family live in Crown Point, and he will be attending Lake Central High School once he finishes 8th grade. To learn more about Do Good – Be More and how you can support their mission, visit dogoodbemore.org.