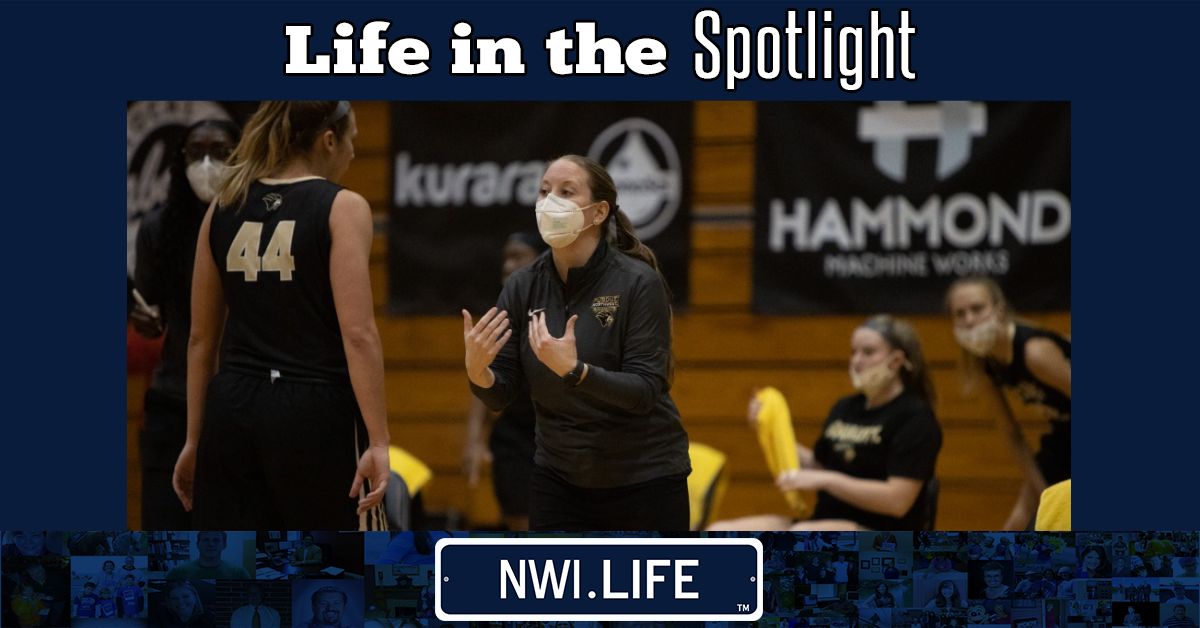 Courtney Locke, Head Coach of Women’s Basketball at Purdue University Northwest (PNW), has always been competitive. Even as a kid growing up in Texas, she always looked for the biggest challenge – be it in soccer, baseball, or basketball. To her, one of those challenges was fairly simple – play with the boys in the Fraternal Order of Police’s youth league.

“It was kind of a battle. My parents really had to fight for it and with my dad being an officer, he had to argue with other police to get me the opportunity,” Locke said. “All the sports that I played, I played with the boys, until about fifth or sixth grade. I just loved the competition, I wanted to play against the guys.”

She enjoyed all of the sports she competed in, but something about basketball, in particular, captured her, and she decided to start playing in a more official capacity.

“I joined club basketball in about sixth grade,” she said. “From there, it was over, that was it.”

Basketball started taking over her life, in all the right ways. She played well all the way through high school and was recruited by Rutgers University, where she played for the iconic, hall of fame coach C. Vivian Stringer. She played in the NCAA Tournament in each of her four years with the team, reaching the Elite Eight in 2005 and the Sweet 16 in 2006.

“Basketball is kind of everything to me,” she said. “From the people that have been in my life to the places I’ve been able to travel, those are kind of the perks of it. But what’s really special are the student athletes that I’ve impacted – they’re everything.”

After her college playing career, Locke began working as an assistant coach – inspired by the way Stringer impacted the lives of every student athlete she coached.

“Coach Stringer prepared us for life as women,” Locke said. “That’s why I do what I do; to prepare these young women for life/. There’s more to it than just basketball. You can see with things like the NCAA Tournament the inequalities and gender inequities we face and the challenges that are out there. My goal is to prepare them for those moments, to show them that they don’t need to settle for crumbs. You fight for what’s yours.”

“It’s been hard, but it’s been fun,” she said. “For 13 years, I did things someone else’s way because as an assistant coach you’re there to help the head coach display their vision. Now, I get to display mine, make a culture change, and watch these young women grow.”

“The wins and losses are always going to take care of themselves, I’ve won a million games and I’ve lost games,” she said. “But when you get to see that kid walk in with whatever they’re dealing with their first day on campus, and then see how they’ve matured and grown a year later – that’s why I do what I do.”