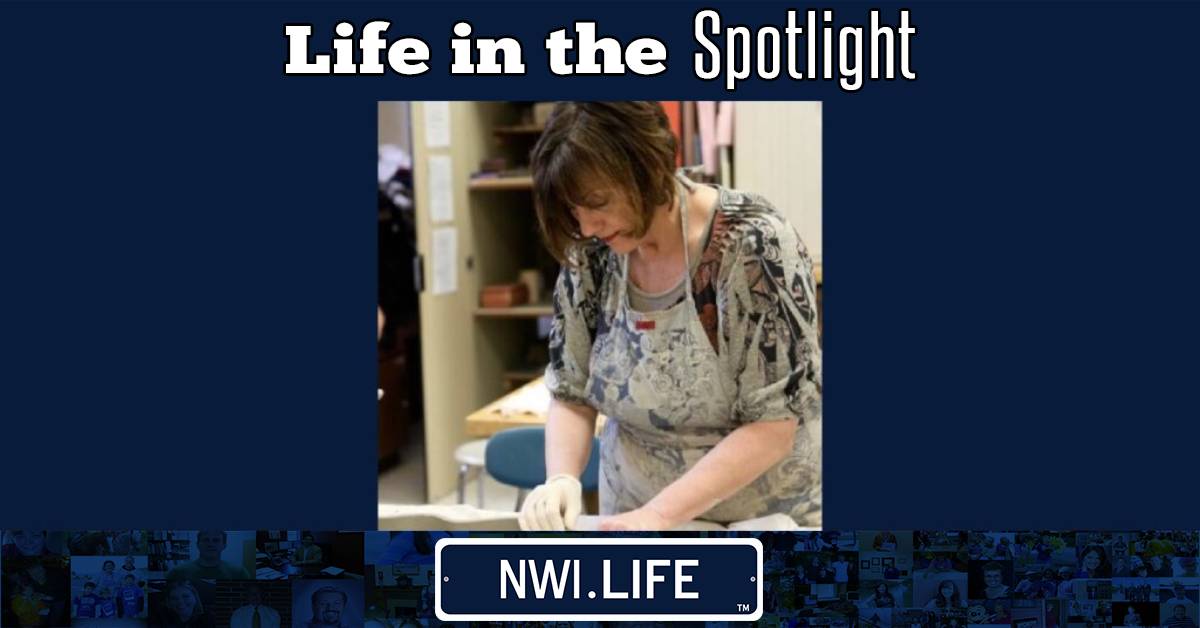 Although Christine Colle has always had a deep love for the arts as a talented ceramic artist and previous art instructor, she never planned to teach the subject herself.

“I never considered teaching art when I began college. My focus was on drawing and painting, but I’m so grateful that different experiences and lessons in life led me to teaching,” Colle said.

Colle thoroughly enjoyed teaching art. She recently retired in December 2018 after over 37 years of teaching, most of which took place at Lake Central High School in St. John, Indiana.

“We had great departments, a wonderful facility, and such great students – it really was as good as an art teaching job can be,” she said. “Teaching ceramics is something I never even knew I had such a love for until I started doing it at the school’s request. Sometimes I wish I would’ve focused on that more in college because it has grown to be my favorite thing!”

One fun thing Colle started, thanks to an idea given to her by a former student and co-worker, was having her students participate in the ‘Doodle for Google’ contest.

“During the 2016-2017 school year, the theme for Doodle for Google was ‘What I See for the Future,’ so we made it a mandatory assignment for all Intro to Art students,” she said.

A few weeks after they were all turned in, the principal called Colle into his office to explain that he got a call from Google headquarters saying that one of her students, freshman Veronica Gonzalez, won the best doodle in the state of Indiana. Colle was overjoyed when she heard the news.

“The event team from Google in Mountain View, California came out and we had a huge celebratory assembly with the newspaper and senator Todd Young where all the students had on colorful ‘Doodle for Google’ t-shirts,” she said. “They had made an enlarged copy of her drawing and put it on a huge balloon with a cloth draped over it so the audience couldn’t see who won until they did the big reveal. I was so excited for Veronica and I know her family was so proud of her, too! The joy in the room that day was truly unbelievable.”

“My first teaching job in 1981 was in Valpo and because I had good friends that lived there, I decided to move there,” she said. “Throughout those years, my love for Valpo grew greatly. The town is always growing and evolving, and you can’t beat the community, you really can’t.”

“I love my home on the golf course. My husband, Dean, and I have our own ‘pocket-of-the-world’ and we are very much enjoying retirement,” she said. “He even built me an in-home pottery studio.”

Her goal is to continue teaching others about the wonderful world of ceramics.

“My husband has helped my dream come true of having an in-home studio both in Illinois and also at our winter home in Florida so that I can teach ceramics that way and continue to do what I love,” Colle said.

One of Colle’s most loved parts of being retired is not waking up at 5 a.m. anymore.

“I’ve discovered a morning laziness I never knew was in me. It is such a delight to get up, have a cup of coffee, watch the news, and take a shower without feeling like I should be in a rush,” she said. “One thing I don’t miss is those Indiana winters!”

Colle has been enjoying retired life with her husband, but not without missing her previous students and colleagues.

“I still felt like I had a lot of teaching left in me because I just enjoyed it so much.” Colle said. “I don’t think it’s talked about enough how much talent can be found at the high-school level, so being able to be one person in my students’ lives who saw that potential and helped them to uncover it fully had to be one of the most rewarding parts.”

Colle speaks nothing but praise about her Lake Central art students, both in her Ceramics and in her 3-D Art classes. One factor she believed in strongly to better her students was raising the bar.

“The harder they work, the more they can be proud of what they’ve accomplished, and as soon as they accomplish something that they didn’t think they were capable of, that’s all the motivation they need to continue to be that way,” Colle said.

“I always strongly believed in the habits of mind,” she said. “I knew that the majority of them wouldn’t be furthering themselves in the art field, but the lessons they learned through problem-solving, appreciation for craftsmanship, and attention to detail, those are the things that will stick with them no matter which path they chose for their future. That was my overall goal with every student I had.”