When Calla Holmes-Robbins took that first step through the door of Dimensions Dance Studio in Chesterton, she fell in love with the art of dancing, rising from student to instructor in just a few years.

“Head up,” she tells her students.

She is poised, elegant, and tough when required, all qualities of a good dance instructor and a NWIndiana Life in the Spotlight.

Robbins was the middle child of three girls, born and raised in Chesterton. All three girls were homeschooled by their father, while their mother worked as the editor -in-chief of a Chicago suburb newspaper. Robbins, 25, and her two sisters started swimming for the Duneland Swim Club, falling in love with the sport.

“I took ballet when I was little, but had to stop because it interfered with swimming,” she said. Her swim career helped her during the summers on the beach of Lake Michigan, where she would swim buoys with friends, read an endless number of books, and sail in the Sunfish sailboats her dad owned.

She attended Cornell College in Iowa, graduating in 2014 with a double major in Classical Studies and Art History. She came back to Chesterton and worked at Barre and Beyond Studio and nannied. It was during this time when she also found the door to Dimensions, which is located at 306 Calumet Rd.

“I started taking lessons as a stress reliever,” she said. “Then they (the owners) asked if I wanted to teach.”

Robbins began the class to become a teacher, but had to quit the studio to attend Indiana University Bloomington to get her Masters in Art History.

“It was good and I had some great classes and professors, but I ended up spending more time at the dance studio in Bloomington than I did in my classes,” she admitted.

Robbins began working at the Arthur Murray Dance Studio in Bloomington as an instructor, but decided to not return to her Masters work and instead move back home to Chesterton to work full-time back at Dimensions. At the studio, Robbins works Monday through Friday and on Saturdays by appointment, teaching couples or individuals the art of dance. There are three types of lessons offered: one-on-one between the single or couple, group classes, and practice parties. One-on-one can be scheduled at any time based off the students’ availability and is a more structured program for the student, she said. The group classes occur every night at 7:30 p.m. and are taught by one instructor who is leading the class through dances. 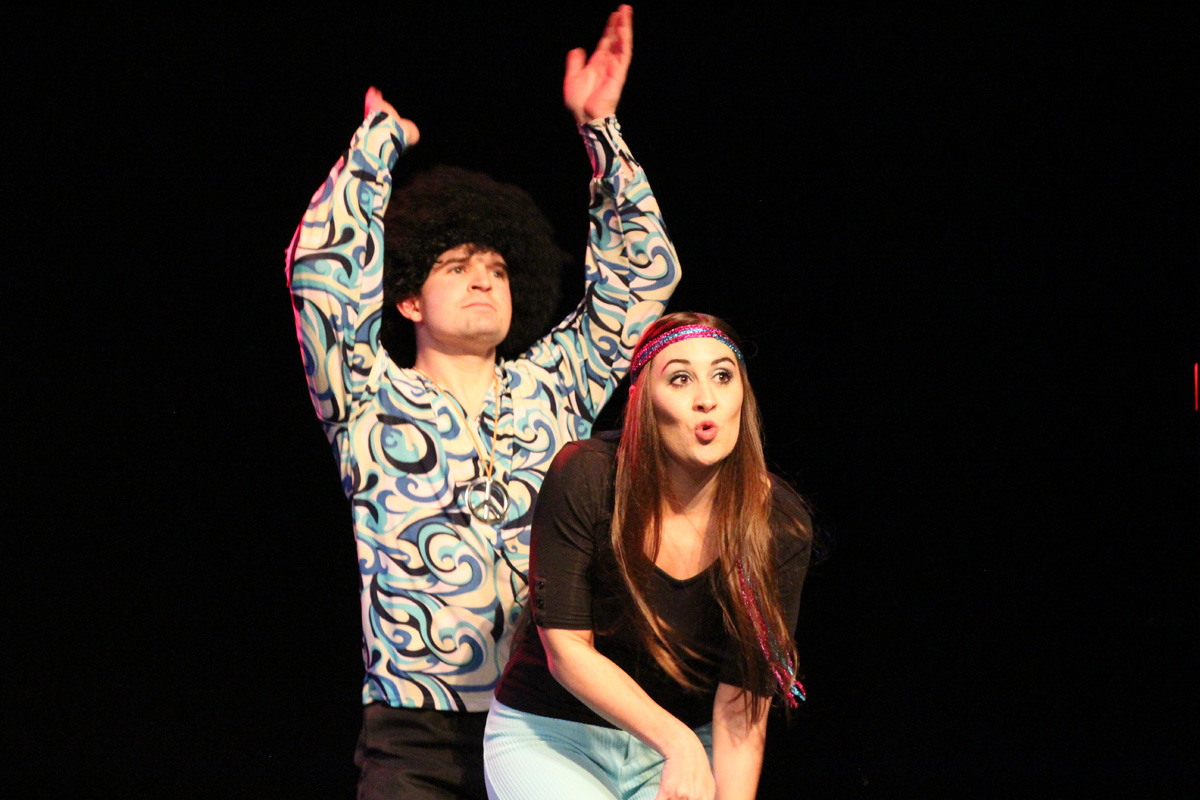 “You don’t have to come with a partner, which is one of the best things about the studio,” she explained. “At group lessons, we rotate partners and end up dancing with everyone anyway.” The dance parties occur every Friday from 8:15 to 10 p.m. and are an open practice time where anyone can come to dance and receive feedback or tips if needed, Robbins said. “We usually have 10 to 15 couples, plus singles,” she said.

Her favorite part about teaching is watching a young couple learn a dance, knowing the next time those two will be dancing is at their wedding, she said.

Robbins teaches the standard ballroom dances at the studio, but in a less structured way, so that the students can use the dance technique in any environment, she explained. The dances taught include: rumba, waltz, tango, fox trot, salsa, and many more.

“I really love the rumba and the waltz,” she said. “The waltz, I mean, it’s the fairytale dance. It’s the dance you imagine when you think about ballroom dancing. You sweep around the floor, the girl gets to be the princess, the boy is Prince Charming. It’s romantic. What girl doesn’t want to sweep the floor in a ballgown?”

Robbins teaches dance, but also uses her experience of acting while performing in local shows, such as the La Porte and Porter County Dancing with the Stars competitions. She recently joined in with other dance instructors and models to participate in a fashion show for the Ladies Night Out event held at Sand Creek Country Club. Since dancing is in the evenings, she fills her mornings nannying the children of local families and volunteers at the Children’s Ministry at Christ Church in Michigan City.

As she glides around the dance floor, Robbins watches the feet of her students. Those feet may belong to a new dancer, single, just trying something new to stay active. Or they are the feet of a couple, 25-years married, taking up a new hobby to rekindle the love after their kids leave the house.

“I love how dancing develops that partnership, whether you’re there with a partner,” she explained. “You have to figure out to communicate with the follower and tell them what you want as a leader.” Through dancing, Robbins’ own self-confidence, social ease, and skills have improved, which would not have happened without that first step through the door.

“The hardest part is walking through the door, but once you conquer that, it’s just coasting down the hill,” she said.